This is the first time a road in Penang has been named after a football icon. 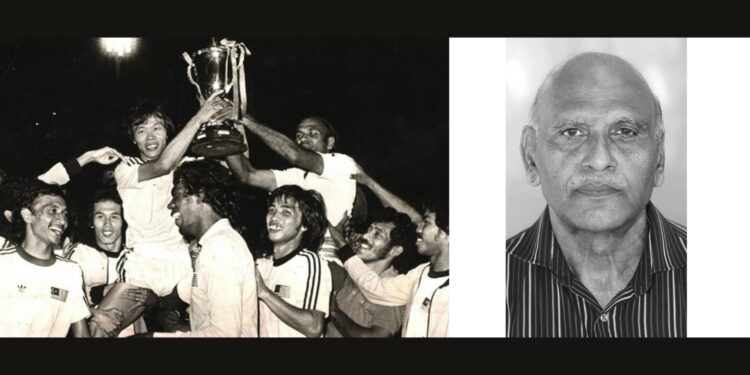 A tribute to the late football legend!

To commemorate the late football legend Datuk M. Kuppan’s contribution to Penang and the country, a road has been named after him.

“Jalan Jiran 1 is a new road and the name change was made in recognition for Datuk M Kuppan’s contribution to the football legend in the country’s football arena,” Zairil said during a press conference near the State Legislative Assembly Building.

According to Zairil, Datuk M. Kuppan, a player and coach, has made significant contributions to the national and state football arenas in Penang. Meanwhile, M. Satees expressed his appreciation to the Penang State Government for approving his proposal which is to rename Jalan Jiran 1 to M. Kuppan.

Kuppan needs no introduction, known as one of the country’s talented football player, coach and a leader to lead a team at the field which is located next to the proposed Jalan M. Kuppan street. Today, the field remains a popular spot among football players around the area and the community right now would even feel proud to have the road named after Kuppan.

M. Satees stresses that this is the first time the name of a football legend is given to a road in Penang.

The renaming process is expected to be completed in two months. “We expect the new name to be official by July,” Zairil further stated.

Throughout Kuppan’s sports career, he assisted the Penang squad win the HMS Malaya trophy in 1958 and the Merdeka Soccer Festival Championship while in the national team. This legend also represented the country for eight years from 1958 to 1965 and was part of the gold medal-winning team at the 1961 SEAP Games in Rangoon. He played for Penang for 10 seasons, serving as captain from 1962, and retired in 1967.

His subsequent coaching career with the national team sparkled with joint Thai King’s Cup wins in 1976 (joint champion with Thailand) and 1977 (jointly with South Korea), as well as successes at Merdeka Pestabola 1976, the 1977 Kuala Lumpur SEA Games, and making it past the Group 1 Asia Zone World Qualifiers Cup stage in Singapore, also in 1977.

Besides that, Kuppan has been conferred with the names “Black Panther of Penang” and “Jetboots” for his ability to attack quickly. Born and bred in Butterworth, the eldest child among his seven siblings began working as a clerk for the Penang Port Commission before marrying schoolteacher G. Amirthamani in 1962.

In 2005, Kuppan was awarded the Darjah Indera Mahkota Pahang (DIMP) honour, which comes with the title “Datuk,” and in 2013, he received the Darjah Setia Pangkuan Negeri (DSPN) award from the Penang Governor.

Legends like him can never be replaced. Their legacy lives on for generations.