If guilty all three can fined up to RM50,000 or jailed for up to 20 years or both upon conviction. 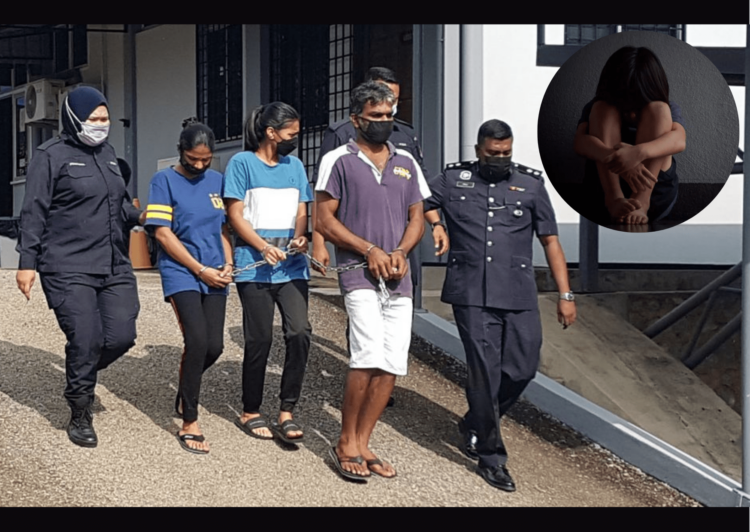 On 8th August, R. Guna Silan, K. Nagamah and their daughter G. Nisha were charged at the Sessions Court here for allegedly abusing a five-year-old girl who had been left under their care.

The couple in their 40s and their 21-year-old daughter pleaded not guilty to the charge after it was read to them before judge Norma Ismail.

The couple who is the victim’s grand uncle and aunt allegedly assaulted the kid using a cane, kicking and splashing her with hot water, causing her to suffer injuries on the back, chest, both legs, head and face.

The offence were reportedly committed from July 15 to July 19 at a home in Bandar Seri Jempol’s Taman Seri Mahsan.

The deputy public prosecutor Muhammad Amirul Noor Hashimi told the court that the offence was non-bailable but if it were to allow it, then additional conditions had to be imposed.

Judge Norma set bail at RM5,000 with one surety for each of the accused after the Counsel for the accused, Haresh Mahadevan told the court that all three do not have passports and are not a flight risk and the daughter has also been offered a place in a public university and is due to report next month.

Furthermore, he stresses that bail should also be considered as the victim is now living with her mother in Johor Bharu and there was no possibility of witness tampering. He also appealed for a minimum bail as Guna did not have a permanent job and Nagamah was only a housewife.

On July 27, the victim’s mother reported claiming that her child had been abused.

Preliminary investigations by the police revealed that the victim had suffered injuries, swelling at various places on her body with burn marks and had old scars.

Prior to this, the police said that the victim’s mother had sent the girl to the couple to be cared for as she worked in Johor Bharu and mentioned that she also paid the couple RM300 a month to look after the girl.

On July 30, the suspects were arrested after they turned themselves up at the Bandar Seri Jempol police station.

The court fixed the next mention on 23rd August.