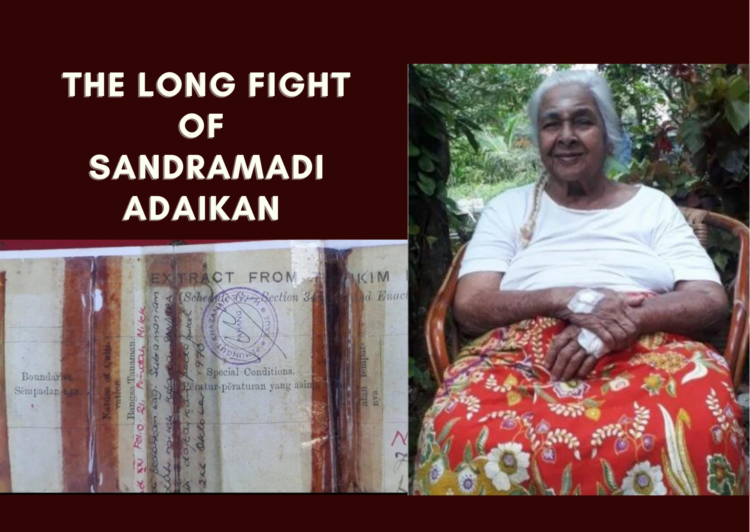 A person’s struggle to secure their land and the never-ending battle over land issues are often depicted in Indian films. In reality, this issue is indeed happening now in every corner of the earth but not many struggles and stories of people are heard. Here is a one-man army, a Malaysian woman who is fighting to reclaim back her taken land.

For the past 5 decades, the 91-year-old Sandramadi Adaikan has been fighting to keep a piece of land in a remote village in Raub, Pahang. It is just half an acre in size of land, but for Sandramadi it is invaluable.

Sandramadi held the land title that was issued in 1911. However, the land office seized the property 50 years ago, noting that the title was not valid. Further explaining in detail how she got the land, Sandramadi said this land was bought by her grandfather by using his hard-earned money working in estates.

It has been a long journey for Sandramadi in the process of retrieving her land till now. She has been in and out of court in her battle to get back the land.

She also had to sell another piece of property in order to cover the legal costs associated with her battle to regain the property where all of her children were born. Spearheaded by lawyer R Kengadharan, she took her case to the High Court in Temerloh but lost.

Sandramadi, who has 11 children, 20 grandchildren and 10 great-grandchildren said “In February this year, the Court of Appeal decided unanimously that there was merit in my application and sent it back to the High Court for a retrial. I am praying hard but I will leave it to the court to decide,”

She stated that her new hearing started on 9th December and is set to continue for two days starting tomorrow (December 21–22), emphasizing that she can only pray for the best.

Although it is only a little piece of property, her 62-year-old son Maheswaran Kandasamy said his family members consider it extremely sentimental for them.

“Over the years, my siblings and I did our best to haggle with the land officials, yet we failed,” he said noting that they will leave the decision to the court to decide the fate of their land.

“The records are all there. The matter is in court now and I will accept the judgment eventually,” the 91-year-old courageous woman mentioned.

Undeniably, this land that they’ve been fighting for years is very precious to Sandramadi and her family. With that, let’s hope that the court will uphold justice by returning her treasured land back to her.

Sandramadi’s determination in the pursuit of righteousness is incredibly inspirational.