Will Nagaenthran's execution keep Singapore safe from the drug trade? 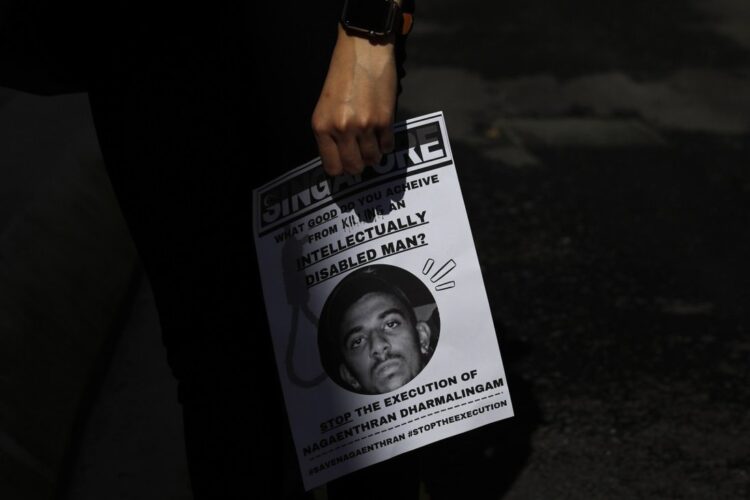 It’s totally deplorable. This piece of news has definitely shattered the hearts of Malaysians and surely the victim’s family right now!

Lawyer M. Ravi has revealed that Nagaenthran K. Dharmalingam, the 34-year-old disabled Malaysian man will be executed next Wednesday (27th April 2022). Despite arguing and defending his client, it’s really saddening to get the confirmation from the lawyer himself.

“Just received the heartbreaking news that Nagenthran will be hanged next Wednesday!”

“The Singapore government will never be able to recover from the disgrace it’s going to face internationally in hanging an intellectually disabled person,” he stated in his Facebook post.

"The Singapore state will never be able to recover from the disgrace it’s going to face internationally in hanging an intellectually disabled person." https://t.co/RpvPhCf6T3

According to AFP, his sister Sarmila Dharmalingam stated that the family members including his mother and three siblings, will travel to the city-state to see him beforehand.

Despite arguing for his client thoroughly, M Ravi is now urging Putrajaya to bring the case to the International Court of Justice (ICJ) to stop the execution. Ravi stated while Singapore was not obliged to follow the orders of the ICJ, there was a chance it would do so in this case.

“The government should apply to the ICJ to set aside the Singapore court’s decision, as Malaysia has the power under international human rights law and customary law.”

According to Singapore’s laws, those caught carrying more than 15g of heroin will be subject to the death penalty. As we all know the case has drawn global attention and advocacy by the Virgin Group founder and billionaire Richard Branson and also our Prime Minister Datuk Seri Ismail Sabri Yaakob had joined rights groups in calling for the prisoner to be spared capital punishment because of his low IQ of 69.

Since the announcement of the execution, Malaysians and Singaporeans have initiated a campaign aptly titled ‘Candlelight Vigil For Nagen’ on 25th April 2022 at Hong Lim Park, Singapore (7pm-10pm). It’s a team effort and can also be mentioned as the FINAL voice from the public to help Nagaenthran from being executed by the Singapore High Court.

I'll be at Hong Lim Park on Monday evening. Hope to see you there. #SaveNagaenthran #AbolishDeathPenalty

There'll be a vigil for Nagen on 25 April (Monday). Will we see you at Hong Lim Park? #SaveNagaenthran #AbolishDeathPenalty pic.twitter.com/Ql5DxqGFoX

This is a video posted earlier this year by @tjc_singapore urging people to take action for the #SaveNagaenthran campaign. We aren't giving up; we need to keep fighting the #deathpenalty and fighting for Nagen until the very last second. #NotInOurName pic.twitter.com/JPZes6owXn

On the other hand, social media users have been actively commenting and urging the public to join the campaign via signing in the petition below:

Please sign and share to STOP the April 27th execution of an intellectually disabled man for DRUG charges in Singapore – #savenagaenthran !https://t.co/E6cMS3dQjy

Nagen has been on death row in Singapore, for a non-violent drug offence, for over a decade. He has psychosocial disabilities. The campaign to #SaveNagaenthran has received huge support. Still the state is determined to hang. @richardbranson @stephenfry @helenprejean https://t.co/uRCaaefjBK

He talks about going home to his family & sharing home-cooked meals with them.

The heart-breaking fact that he does not fully understand he faces execution further demonstrates that he lacks the mental competency to be executed.

Let’s hope and pray that there’ll be some sort of miracle to halt the execution all together!

This piece of news has definitely shattered the hearts of Malaysians and surely the victim's family right now! Nagaenthran K....

Kavadi's will not be permitted at this year’s Thaipusam celebration in Batu Caves Sri Subramaniar Swamy Temple. The decision came...

The Malaysian Anti-Corruption Commission (MACC) is actively investigating 205 firms that had allegedly received funds from the Malaysian Indian Transformation...