Meera Mithun is no stranger to controversy. Having appeared on Bigg Boss 3, the supermodel and actress has been a tabloid favourite. But who is she, underneath the layers of social media and reality television?

There have been enough interviews and articles about her stint on the reality show and her controversial statement. Varnam MY talks to Meera about her passions and pursuits, and what lies ahead in her career. 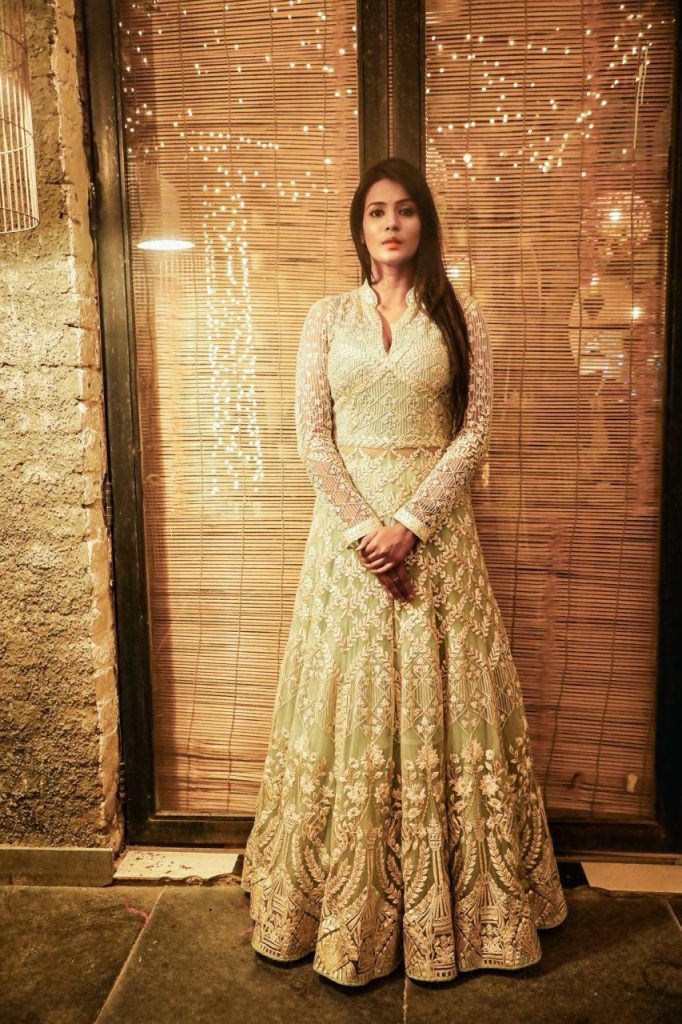 Varnam (V): As you were growing up, was there any inkling that you would head into the entertainment field?

Meera Mithun (M): None! I was always studying and I loved reading. My father used to train us to read books on law, politics, history, Tamil language and even the Thirukkural. I was a nerd. Even going into university, I pursued biotechnology.

Fashion wasn’t my thing either. I wore a pants and top for the first time when I was 23, up until then, it was salwars all the way!

V: From a bookworm to supermodel, how did that happen?

M: It all began with dance. I was working on a research project that was very stressful. I needed a hobby, so I took up dance. People began to ask if I was a model, because of my height. Offers even came in, but I denied them because at that point, I didn’t know if it was something my family would allow.

I was at a low point in my life after dealing with some personal issues, and at the time, someone approached me to do a fashion show. I had no clue what the fashion world was about. There is a saree show, by Co-Optex, the person said. And I thought, why not? 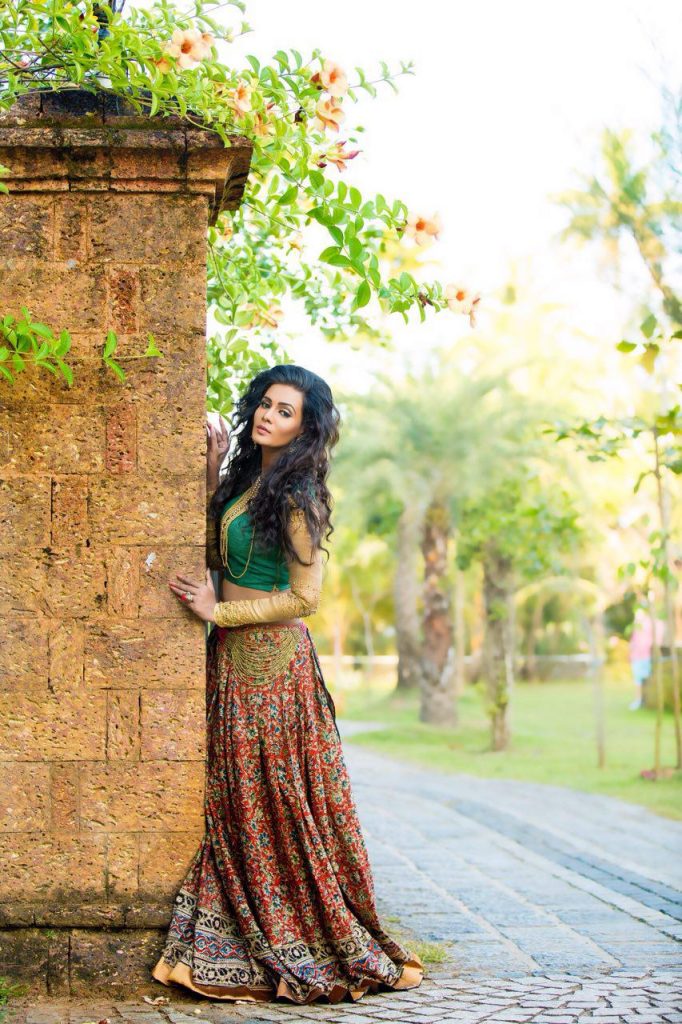 V: So it wasn’t a problem for your family, after all?

M: I spoke to my father about it, and he dropped a bomb on me. He told me that he was former Mr Madras, Mr Tamil Nadu and Mr India. I had no idea! I mean, I knew that he was a body builder when he was younger, but that’s about it. He showed me pictures and everything.

He said, “This is a really tough field. People are going to ask you to do things you might not be comfortable with, and I am not sure if this is safe,”

I told him that I don’t want to confuse myself with these thoughts, I just want to start. So I did the first show, and soon after, the offers came in from other brands. That’s how my modelling career began.

V: Was the progression to films the natural next step?

M: That too, was almost by accident. In my fifth year of modelling, many producers and directors approached me, with film opportunities. I thought to myself, I don’t even know what I am doing in fashion, what more movies! I declined the offers, but later thought that I would like to give the film industry a shot.

Again, my father told me that the film industry is a totally different ball game, and that he was worried about me entering the lion’s den. I told him, you said the same thing about fashion, and look how far I have come, let me try films. 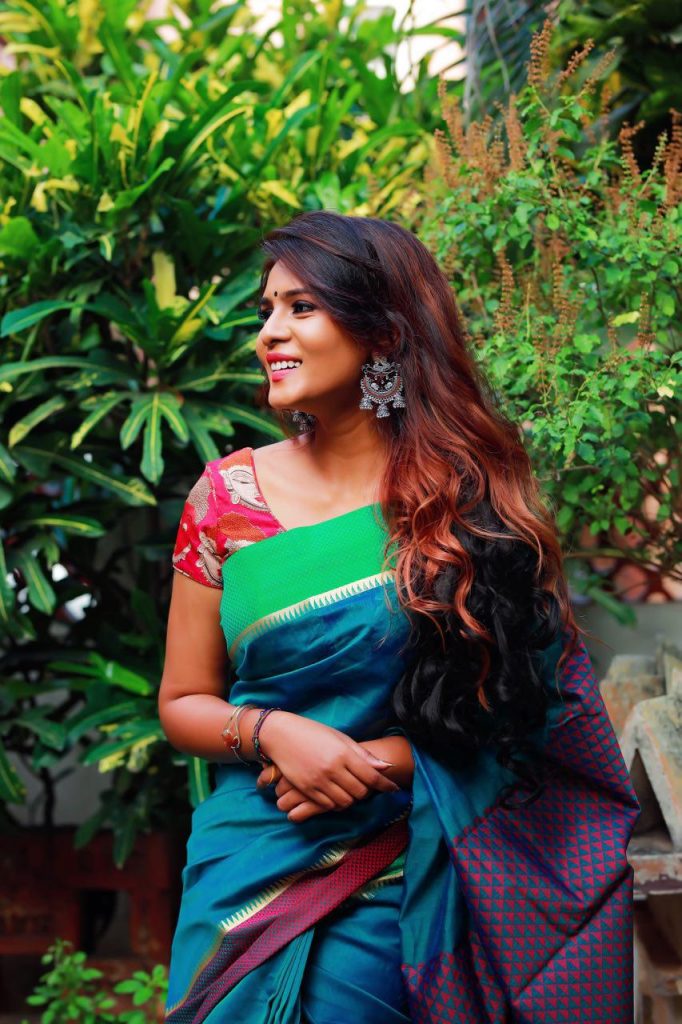 V: So you went on to make your debut in 8 Thottakal, with a character that not many actresses would dare choose.

M: It wasn’t easy, because I wanted my first movie to be really different. I mean, people have seen me as a supermodel and pageant queen, so I wanted to do a totally contrasting look. In 8 Thottakkal, I played the character of an innocent looking girl with a negative shade. That was the right launchpad for me.

V: And how was the response from the film fraternity post 8 Thottakal?

M: After that, I received plenty of opportunities. Probably because I am Tamil speaking, and can read my own script. I wanted the second movie to also be a hit. For a few months, I was busy with my commitments in the fashion world, and then I received the offer for Thana Serndha Koottam. Vignesh Shivan explained the role to me, and I didn’t want to miss out because it was a Suriya film. This was another great stepping stone for me. 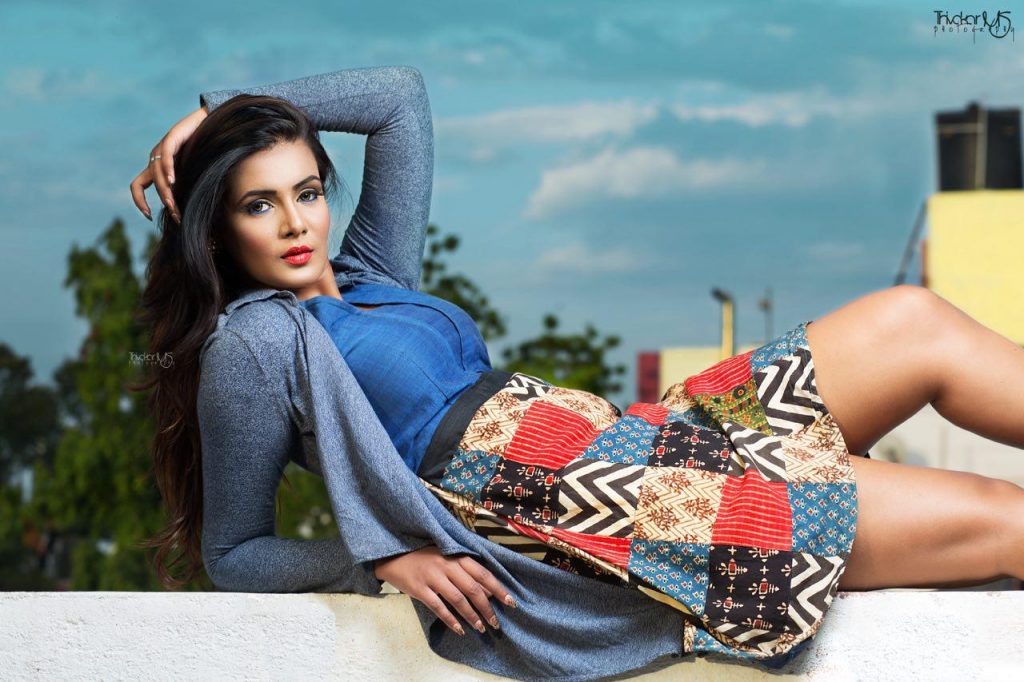 V: Who inspires you, Meera?

M: My role model is Angelina Jolie, anytime. Whether it is her personal life or her career, she can handle anything! I love how open she is about all of it. That really takes guts. To my knowledge, she was the first woman to open up about her depression. I really look up to her, and I love the fact that she is genuine.

V: Speaking of depression, do you have days where you feel down?

M: Of course. When I am feeling down, I accept and acknowledge it in one part of my mind, but I don’t forget to smile, laugh and do my everyday activities. You just have to keep pushing.

Sadly, it’s the norm to have down days when you are a celebrity. We handle so many more things – criticism, negativity, haters, and opponents. In fact, even if you do something good, the bad sometimes tries to take over. The true test is how you push through it. 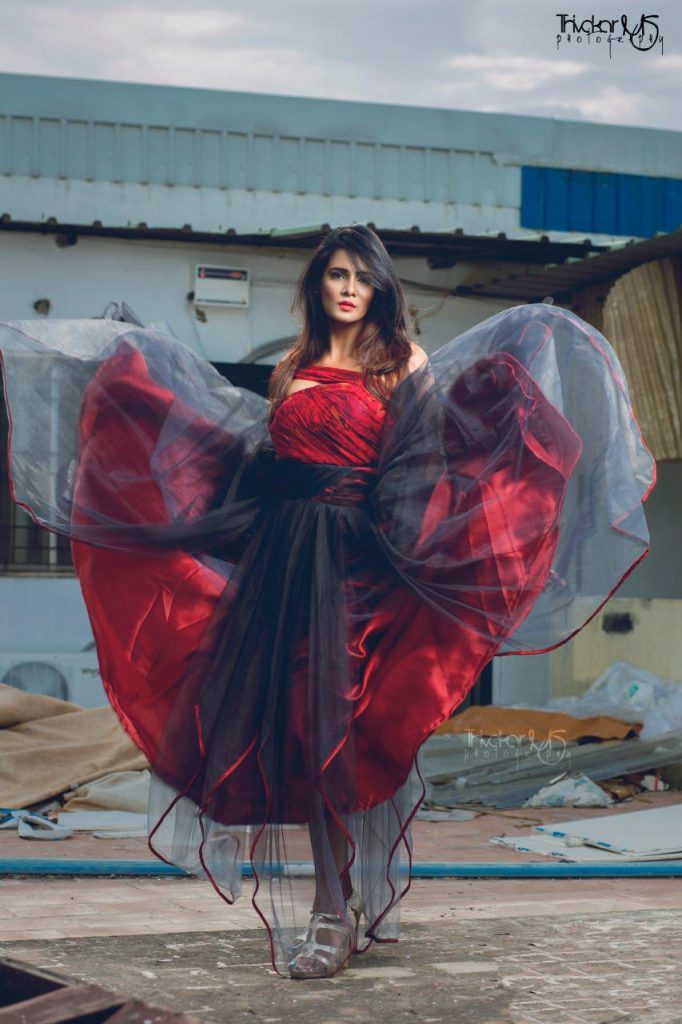 V: You are a feminist, which basically means a believer of equal rights. But that is considered a dirty word among the Tamil masses. How do you think we can shift this perception?

M: It is not an easy shift to make. Tamil Nadu is a male dominated society. I suppose it boils down to the culture where men are put first. Ultimately, it is all about education and exposure. There needs to be more emboldened Tamil women, and then we will see a change. Of course, it will not be overnight. We women just need to keep going.

There needs to be more emboldened Tamil women, and then we will see a change.

V: What is the one change you would like to bring about in the Tamil film fraternity?

M: Just one thing. I want the Tamil male celebrities and personalities to accept that a woman can have an opinion. She can speak her mind. It is almost a sin here for a woman to talk.

A woman is a human too, and she has the right to voice out her thoughts. It is a shame because so many Indian women like Indira Gandhi and J Jayalalithaa have fought to make our nation a better place, and you still have the same kind of mentality among the masses.

Accept that a woman has opinions. You can argue or debate with a woman, without it affecting your masculinity. This is what I want to put forward. While I am aware that this isn’t going to be easy, lets hope for the best.

Accept that a woman has opinions. You can argue or debate with a woman, without it affecting your masculinity.

V: What are your thoughts on Malaysia and the Malaysian fans?

M: Malaysians are seriously so caring, they shower so much love towards the Tamil entertainment and film industry. This kind of love is exactly what we need to keep us going.

In fact, my Malaysian fans reached out to me with their support and encouragement after Bigg Boss 3. This level of kindness really makes me feel special. I am really grateful for that. They are able to see the truth and not blindly believe what is being said on social media. 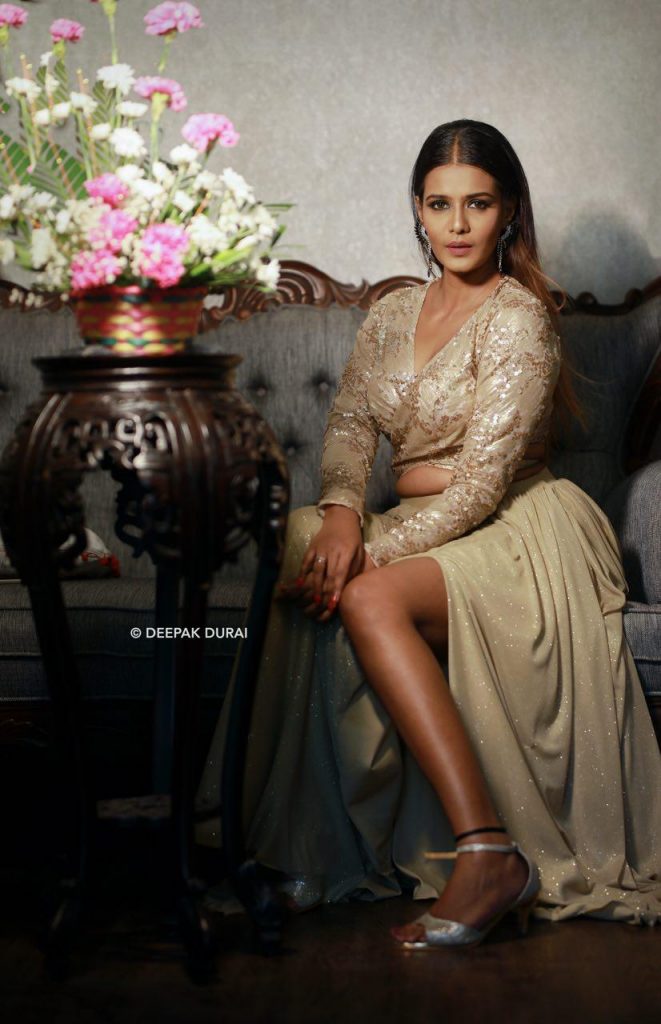 V: And would you be willing to work on a Malaysian Tamil film?

M: Definitely! I am willing to work anywhere. Really, it is all about the story, script and how unique my character is.

V: What is your dream, Meera?

M: I want to be happy, and my passions keep me happy. The thing is, my passions are more than one! There’s the ramp, films and grooming. I want to pass on what I have learnt to the young, upcoming models. Politics is another passion of mine. 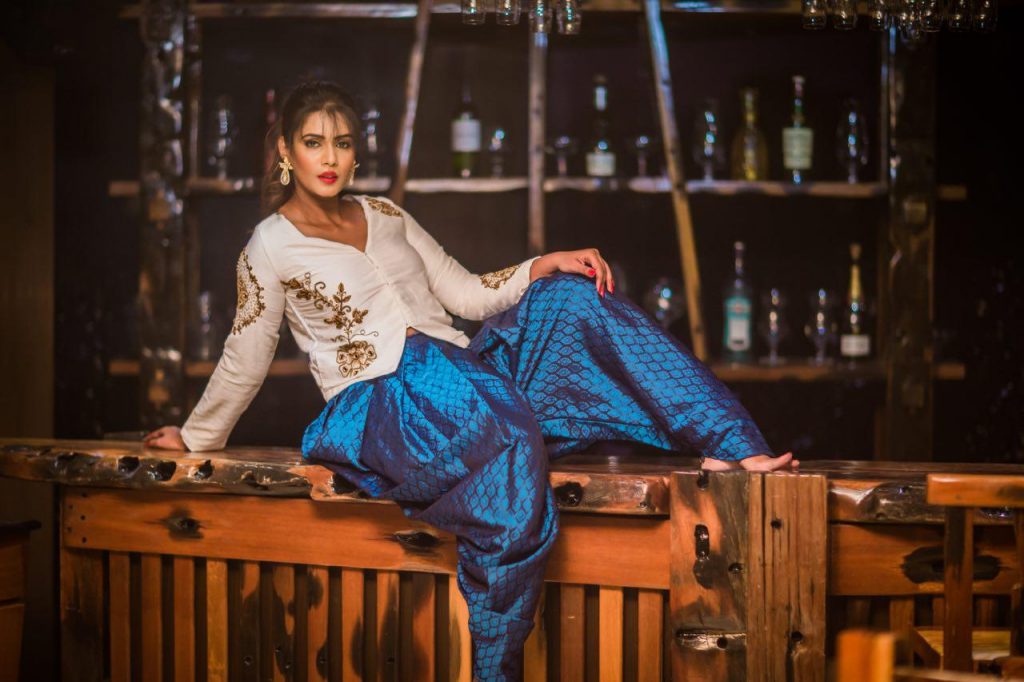 V: So we can look forward to your political career in the near future?

M: Yes, I want to serve the people, and bring change to society. As a first step, I have been elected as the director for Chennai Tamil Nadu State in Anti-Corruption Commission (ACC). I want to make Tamil Nadu a corruption free state, this is the first step and I’m glad to have embarked on it.

I want to serve the people, and bring change to society.

V: And what message would you like to leave for the people?

M: Be honest. I don’t know why people have forgotten that. If everyone is honest, things are going to be smooth sailing. Of course, it is easier said than done.

Perform your duties to your best abilities, use your common sense, and never forget that there is karma. If you don’t believe in spirituality, think of it this way, every action has an equal and opposite reaction. Everything has its consequences. Just be honest and the world will be a better place.