FMCO will have a drastic effect on his livelihood, help where you can 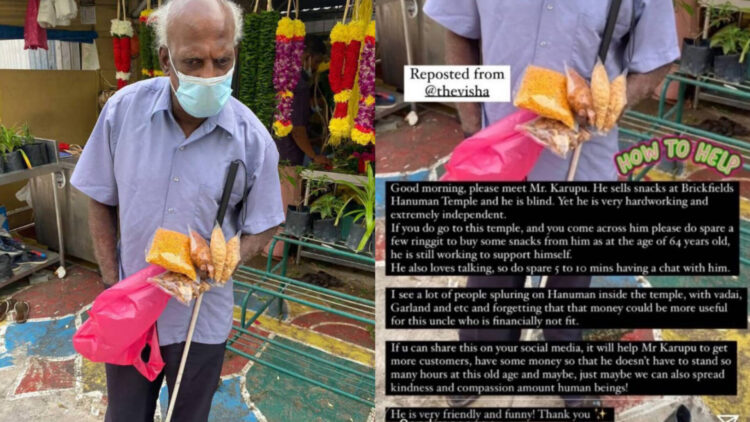 FMCO, which is now in effect due to a sporadic spike in COVID-19 cases was an enforcement by the government having left with no choice after mass testing revealed thousands of positive cases in a span of just a couple of weeks. What’s worse, the COVID-19 variants are also spreading fast and is even more deadlier due to late detection and less awareness among the public on its symptoms that often go unnoticed.

Many of us blessed ones have the privilege of staying home and working remotely to avoid outside contact. Hence, we should take a moment to keep in mind those who earn only a meagre income to get by and they are often times the small time traders and business owners.

Uncle Karuppu, who sells snacks outside Sree Veera Hanuman Temple in Brickfields happens to be one of them. He is blind yet a very hardworking and extremely independent person.

His snacks really don’t cost much at all, but sadly, he won’t be able to continue his business during FMCO due to the closing of temples. Today happens to be the last day of operation for small business owners and traders such as uncle Karuppu before FMCO goes into full effect.

So, if you live near the temple do take a couple of minutes to stop and purchase his snacks. You might want to buy his snacks or even talk to him for a few minutes because he is very friendly. He would talk to you fondly without hesitation.

The 64-year-old who is still working very hard, standing for long hours just to sell snacks so that he can support himself, will be extremely grateful for the extra help.

All of the information provided above was presented by an Instagram account user, @thevisha. She recently shared a story about this uncle hoping to increase his customer base. According to a report by World of Buzz, @thevisha was told that he has children, but they had abandoned him.

“He’s really chatty because I think he’s rather lonely. I just hope he gets the assistance he needs, since he’s very old and also blind.”

Hence , all credit should go to her, and I hope that this article inspires more people to help uncle Karuppu.