As little kids, we love to spend time watching TV shows that revolve around breaking world records and would start daydreaming that one day we would set a new record for whatever talent or ambition we had at the moment.

Selinaah Muralitharan, a MAHSA Medical student set a record for being the new record holder in the Asia Book of Records for composing the Longest Love Poem in the region. There was never a better time to become an author—or to plan to become one.

The former national badminton team player says that the poem was inspired by a close friend.

In the year 2015, she wrote her first poem entitled Flawed Ballerina, for her close friend whom she knew for years. She was a ballerina and had twisted her ankle. The poem depicts her injuries and how she has worked on to continue dancing.

The 21-year-old poet discovered a gentleman in Britain who wrote 100 stanzas for the longest love poem. Selinaah thought she could do better than that and completed the poem in January. Surprisingly, she had never taken any creative writing courses before.

In April 2019, Selinaah made a name for herself by setting a new record for writing the Longest Love Poem (English) in the world in the Malaysia Book of Records (MBR).

However, owing to some paperwork concerns, Selinaah’s quest to be accepted by the Asia Book of Records in February was denied. In August, she re-applied and last month received the confirmation via email. On the other hand, she has plans to qualify for the World Records Book, too.

Selinaah published her first poetry book entitled, A Hundred Thoughts in the year 2018. Not afraid of dreaming big, the young poet is in the midst of preparing content for her next poetry book, which revolves around her favourite subjects’ in life and its complexities.

Beaming with joy, her parents S. Muralitharan, 59, and Dr Parimala Devi Kalalingam, 55, were unable to contain their happiness and joy on the victory of their youngest daughter.

Congratulations Selinaah, and we extend our best wishes to you in your all your future endeavors. 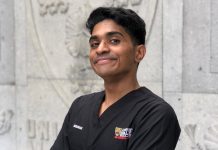