Defying the odds to become a doctor! For most people, the thought of going through medical school is daunting, but what if in the midst of your studies you were struck with a major accident that rendered you severe Traumatic Brain Injury (TBI)?

Yes, that’s Parrvinaa’s unfortunate fate. The writer is beyond amazed with her determination, who dealt a blow by fate and fought the obdurate bureaucracy to complete her Bachelor in Medicine and Bachelor in Surgery, fulfilling her childhood dream of becoming a doctor.

As a Public Service Commission (JPA) scholarship recipient, the 28-year-old young lass has now been thrust into the limelight as Dr. Parrvinaa Sonie Bhardwaj after graduating from Manipal University College Malaysia.

Exactly six years ago, on (1st December 2016) Parrvinna met with a major accident which caused her to experience severe traumatic brain injury. According to her Facebook post, it was a form of rebirth after the tragedy as she went through traumatic brain injury which involves the cerebellum, temporal lobe, parietal lobe and occipital lobe, fracture base of skull, fracture right femur, fracture left tibia and fibula and left bimalleolar fracture.

In her arduous journey overcoming these obstacles and achieving her dream, she gives credit to her Manipal family. Through the support of university lecturers, admins, family and friends, Parrvinaa has overcome many challenges that would have defeated most people.

According to the Star, Parrvinna stated that she was determined to pull herself up and complete her tertiary education. Rediscovering her motor abilities was another traumatic phase in her rehabilitation phase, as she had to relearn almost everything which begins with rolling over on the bed and progressing to sitting up with help.

At the early stage, she could sit up without anyone’s help and follow with standing by taking a few baby steps. Later on, she managed to relearn how to wield pencils, scribble, write, and finally draw, all of which she had to master from the start.

“A temporary physical limitation was not going to hold me back from achieving my dreams,” she recounted, choosing her words carefully, separating “limitation” from “disability”. – Parrvinna

Social media users flooded her comment section with best wishes. Here are some of the comments: 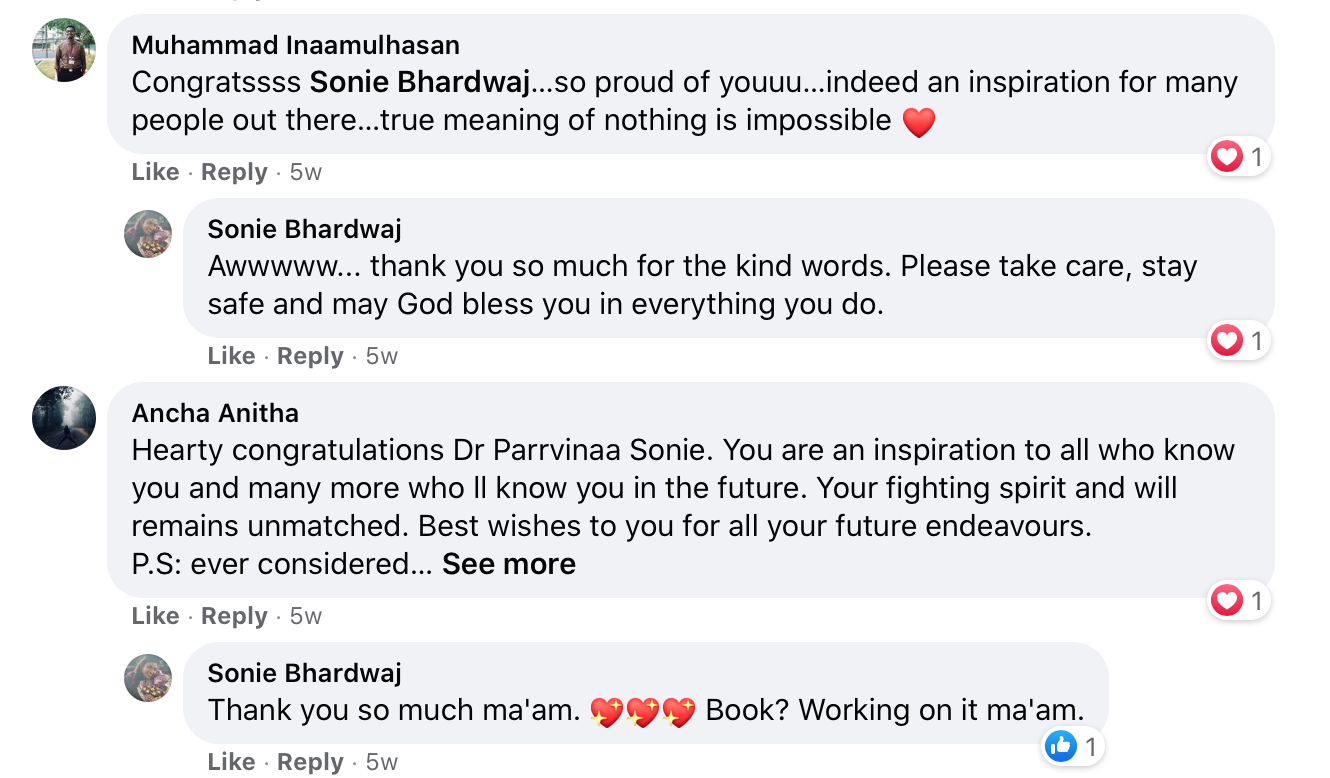 Having had her share of experience with life and death — Parrvinaa is an inspiration proving nothing is impossible.