(As the new moon shines, it cools my heart.)

Little did S P Balasubrahmanyam think as he sung these lyrics for the first time in 1982, that he would be traveling the world over to perform, and that he will visit Malaysia for a concert dedicated to his tunes with Illayaraaja by the same name.

SPB Live in Concert Illaya Nila – Ilayaraja’s Exclusive Hits will be happening on Merdeka Day, (31st of August) from 7pm onwards at the KLCC Plenary Hall in the heart of the nation’s capital. The organizers, Raaghav Productions, recently held a press conference to highlight the event at Ramada Suites KLCC. The event was attended by SP Bala himself, along with SPB Charan. Other speakers at the event were Ramada Suites KLCC General Manager, Mr Rajesh Daswani and Mr Ratnaguru, on behalf of Raaghav Productions. The event also hosted numerous Malaysian celebrities such as Yogi B, Punnagai Poo Geetha and Ananthaa in addition to the various media outlets. 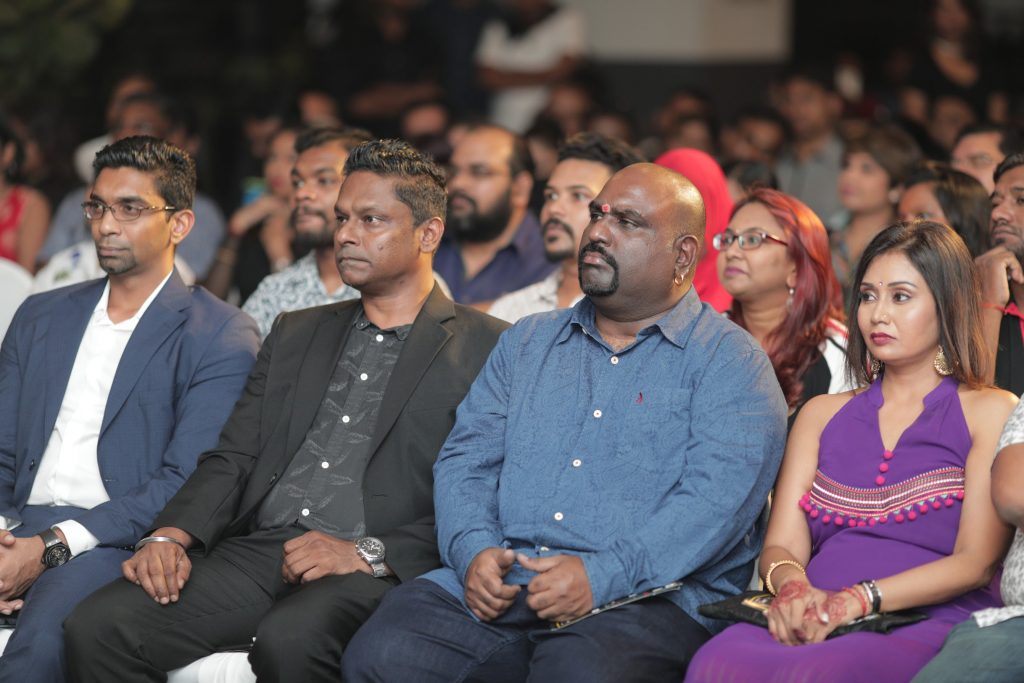 Although SP Bala began his career with Gemini Gansan, and has received the Padmashri and Padmabhushan awards, he starts off by humbly saying, “Please don’t call me a living legend, it doesn’t make me comfortable. Just call me SP Bala,”

The moment the floor was opened to questions, the attendees of the event were clamouring to gain control of the microphone for a chance to address SPB. The singer, though, had one caveat. “Please don’t ask me questions for which the answers are already known to everyone,”

Here are a few excerpts from the press conference.

On his separation with Illayaraaja 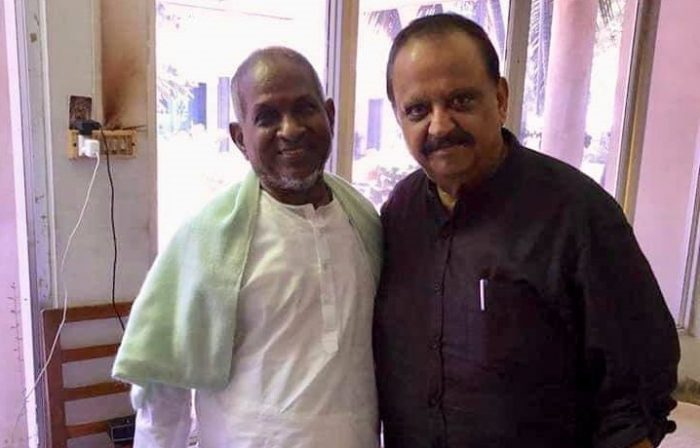 When he was asked how he managed during the phase of separation with his friend Illayaraaja, SP Bala explains what really happened, “In 2017, I was celebrating my 50 years in the music industry, and I was on a world tour. That was when Illayaraaja started asking for royalty. He sent a notice to many musicians, including me. And then he didn’t call me to work,”

SP Bala reveals that it all ended when Illayaraaja invited him to work on an upcoming project, “When he finally did call me to work, I went, and that ended it. When I met him in the rehearsals, it was exactly like how we had been for the past 50 years. There was no animosity at all,”

“These small spats happen in families and friendships, and only then we learn the value of each other.”

And when we bounce back, we do so with more love for each other. We were not together for about 2-3 years, at most. It’s not like we were meeting every day otherwise. He called me up, and we have sorted it out. Things are normal now,”

On returning to acting 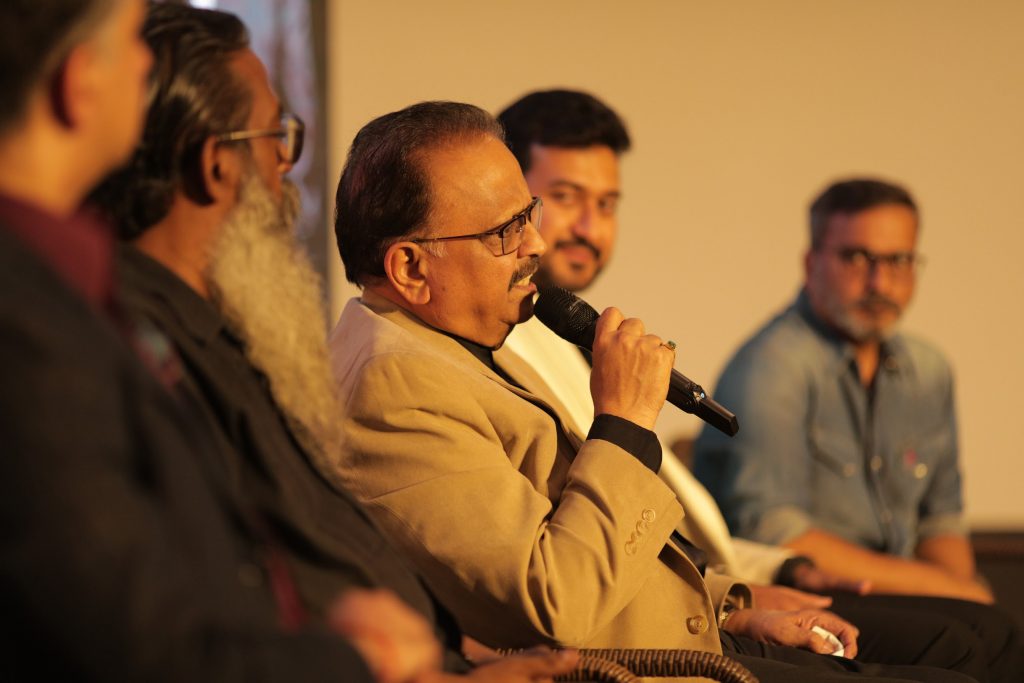 SP Bala may be a singer, but he has starred in numerous Tamil and Telugu films. He was asked if he will ever return to acting, to which the singer replies, “If I get a good role to star in, I will not hesitate, provided I have the time for it. In fact, you may soon see me in a Tamil movie!”

He also spoke highly of his co-star, Lakshmi. While she is younger to him, he reveals that he learnt plenty from her,

“If you want to learn, you can learn from anyone. Forget your seniority, get down to earth and you will be able to learn from every element around you,”

The singer may be one of the most sought after people in the Indian music fraternity, but he is adamant about upcoming talent, “New singers need to come up, if new singers don’t come up, I wouldn’t be sitting here. You would still be listening to TM Soundarajan and Sirkazhi Govindarajan!”

On singing a full song in one breath 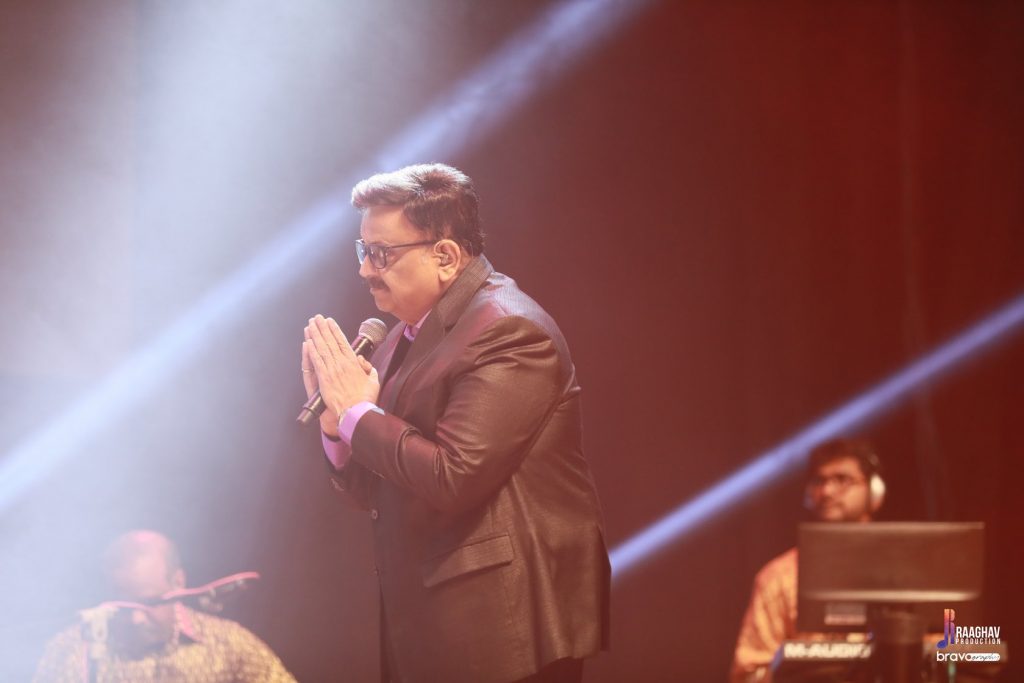 “On stage also, I reveal that I did not sing it in one breath, we are really cheating all of you, and if you didn’t realize that, you are living in an illusion!” he says as the hall erupts into laughter. 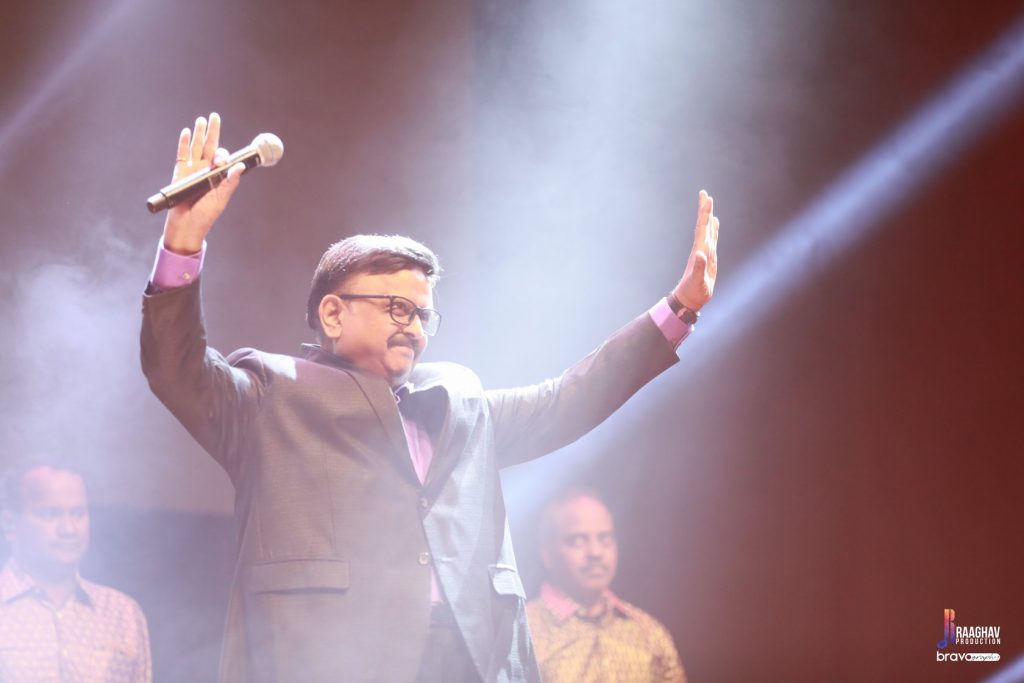 “Kamal Hassan is my younger brother. He loves and respects me a lot. He made me a producer in Telugu films. People are waiting in a queue outside his house to work with him, and yet he called me to ask to work with him,”

SP Bala reveals that he and Kamal Hassan are more like brothers than friends, “People always ask me why I don’t sing for him, or why I am not going into politics like him. We have our own preferences. We respect each other, and that’s the most important thing,” 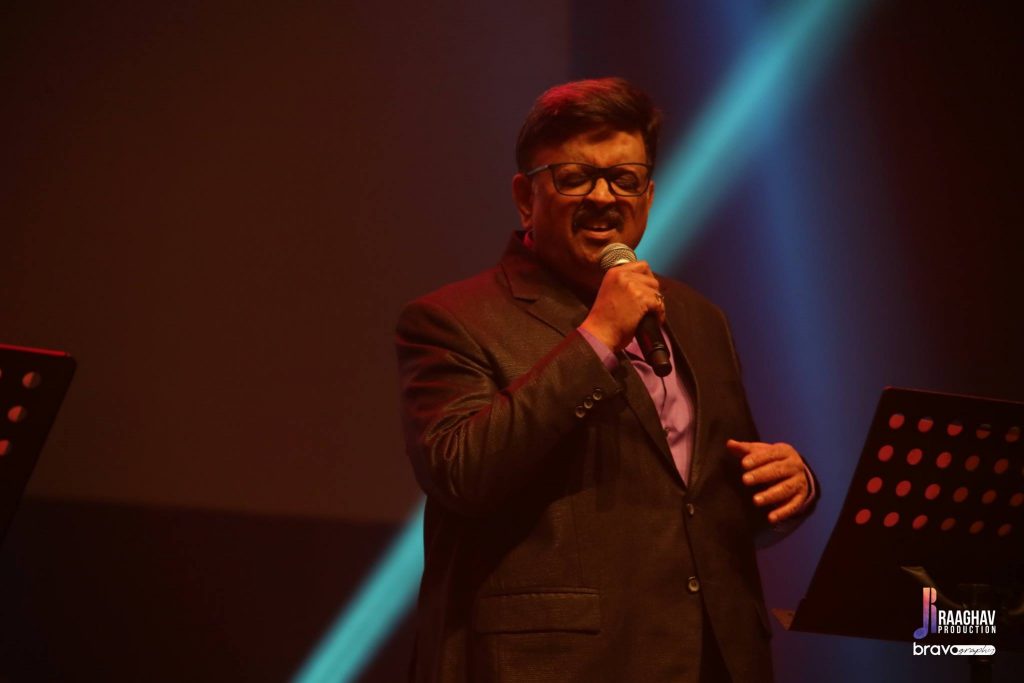 SP Bala reveals that he began collaborating with Raaghav productions thanks to SPB Charan and that is how it all began. Sure enough, Charan performed for Raaghav Productions first show, back in 2017, for a small group of 150 people.

Raaghav Productions have hosted SP Bala in 2018, for SP Bala’s Mettu Podu, a concert dedicated to AR Rahman’s tunes. Referring to this, SPB said, “Last year it was ARR composition. This year, only Illayaraaja. This makes our job so much easier! We don’t really need to think which song from which music composer we need to sing,”

The same organizers also conducted a sold out charity show earlier this year featuring SPB Charan, Swagatha Krishnan and local talents The Banditz. The entire Raaghav Productions team appears to be all geared up for SP Bala’s show in August this year, and the successful press conference was a testament to that

On being an accidental singer 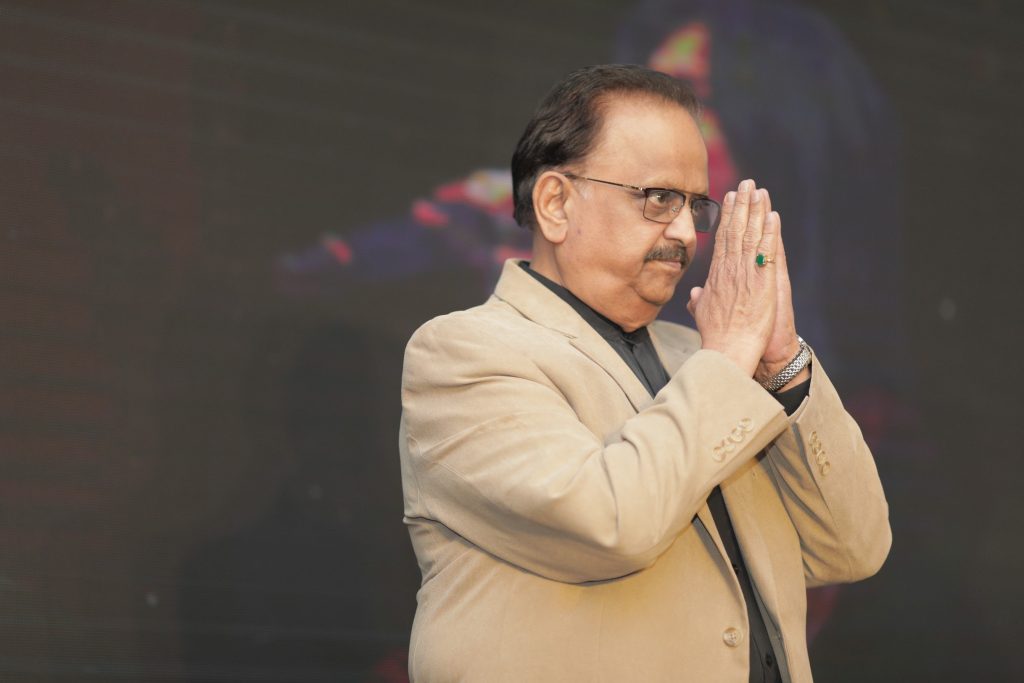 Revealing that he originally intended to become an engineer, SP Bala reveals, “I did not expect to come to this level when I began my career. I started singing to earn some extra pocket money, because I did not want to burden my father who was already supporting my studies,” He goes on to say that he became a singer by accident.

It goes without saying that Illayaraaja is an emotion. And to have a voice like SP Bala delivering those emotions to us over a four hour concert, with a talented bunch of singers and musicians – it is going to be a night that NEEDS to be experienced.

To get your tickets to SPB Live in Concert Illaya Nila – Ilayaraja’s Exclusive Hits, click here. Alternatively, you could WhatsApp DK at +6010 407 1526