Let’s face it, there’s only one reason why any one of us went to the cinema for Bhaagamathie, and the answer is Anushka.

There’s just something about Anushka Shetty’s presence on screen that is intense and overpowering. She commands attention with her despotic persona and she doesn’t need the help of a top male hero like Vijay or Ajith to help her carry the movie.

Rumour has it that director G Ashok waited five years for Anushka to do the movie – and it is clear why. I don’t think any other (existing) Tamil heroine could have carried the movie the way Anushka did. And Bhaagamathie, despite opening on Republic Day and having to compete with the highly-anticipated Padmavaat, recorded the best box-office openings for a female-centric film. 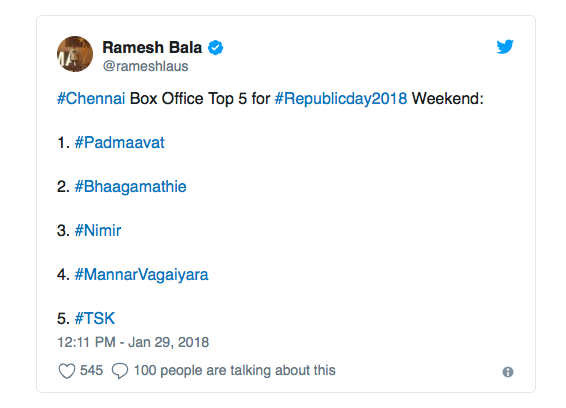 Here are 3 reasons to catch the film – if you still haven’t:

I think those two words are a good enough reason for you to march into the cinema and buy your movie ticket. Anushka has proven why she’s Tamil cinema’s reigning queen over and over again.

She displayed a laudable performance in the 2009 thriller, Arundhati, cementing her reputation as a competent actress who can carry a female-centric film all by herself. She then kicked it up a notch and wowed us with her kick-ass portrayal of Devasena in SS Rajamouli’s phenomenal hit, Baahubali.

In Bhaagamathie, Anushka is a IAS officer, Sanchala, who is in jail for reasons unknown to us. While the other characters kept repeating that she was jailed for murder – and for murdering the love of her life at that – we know that our quietly assured and noble Sanchala could not possibly have done that.

For the first two hours of the movie, Anushka owned the screen with her calm and placid portrayal of Sanchala, maintaining her composure as an IAS officer despite being a convict now. It left me impatient and wondering “Why? Why is Anushka reduced to someone so imperturbable when she is capable of much, much more?”

My questions were immediately crushed when she morphed into the powerful and supreme queen that is Bhaagamathie! When Sanchala turned into the vengeful queen (who supposedly possessed her), I felt goosebumps and quivered in my seat. Not because the scene was so horrific and scary, but because this was the Anushka I was waiting for. Her eyes were bloodshot red, her hair let down and fierce, and she stood tall, powerful, and enraged with vengeance as she declared that she was BHAAGAMATHIE. And I still can’t get over how she made that introduction.

Going back and forth as the composed Sanchala and the unforgiving and revengeful Bhaagamathie, Anushka has proven that she can play dual roles to perfection – very much like Jyotika in Chandramukhi and Suriya in Vaaranam Aayiram.

As a girl, I constantly look for positive representations of women in every movie I watch, which is why I was elated to watch Asha Sarath play a central role in the movie as CBI Joint Director Vaishnavi Natarajan.

Vaishnavi is in charge of interrogating Sanchala who supposedly has links to politician Eshwar Prasad (played by Jayaram), a minister who appears to be squeaky clean and genuine – but apparently robs temples as a hobby. Even though I was not quite impressed with Asha Sarath’s performance, she still did a good job as a passionate, angry CBI officer who is determined to rake out the truth from Sanchala.

Perhaps the casting director could have casted someone else as Vaishnavi, someone better suited for an authoritative role, but they probably didn’t because director Ashok didn’t want anyone to overshadow Anushka. In that case, of course, he’s terribly wrong because no one can possibly dim Anushka’s performance.

The movie starts out as a horror flick, the opening scene and background music score sets up an eerie mood that makes the back of your hair stand. We see Sanchala being interrogated in a haunted mansion that belonged to a queen who used to rule with glory and success – and then got betrayed by a man she trusted. The queen is now seeking revenge by taking over Sanchala and looking to avenge the man who was responsible for her downfall.

Although most of the movie felt like a Chandramukhi downgrade with the typical haunted bungalow and split personality approach, you still believe that it’s a horror movie, you want to see who did this powerful queen wrong, and how is she going to get her revenge.

However, I spoke to many of my friends and almost all of them said the movie isn’t scary at all. Which is quite embarrassing for me, because I was literally watching the movie hiding behind my hoodie (don’t judge me). And perhaps that was why I was even more disappointed when it all turned out to be fake.

Sanchala was not possessed. There is no Bhaagamathie. So wait, I spent the last two hours being scared over nothing? 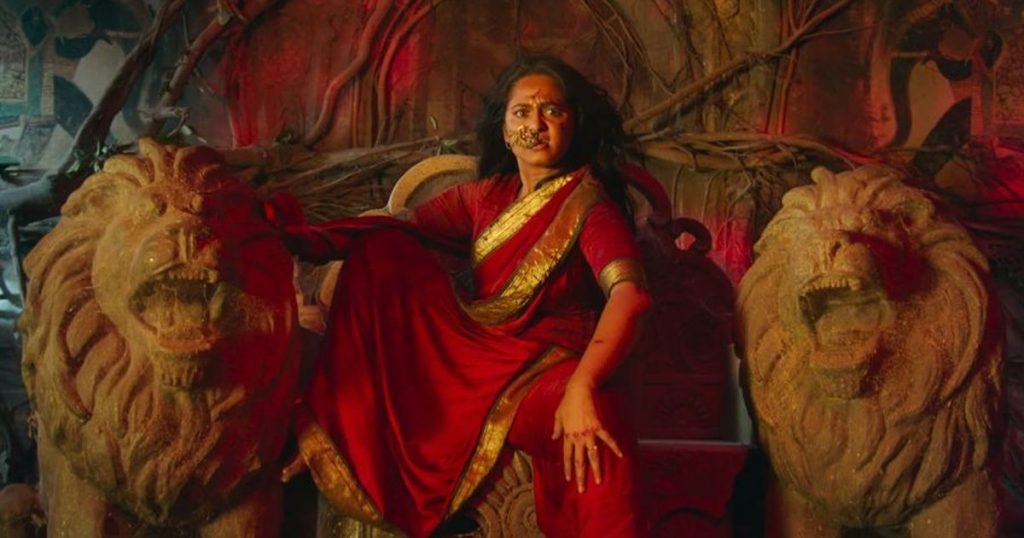 As it turns out, the whole thing about Sanchala getting attacked and possessed by the spirit of Bhaagamathie is all part of her elaborate, devious, plan to cover for minister Eshwar Prasad, and to get her cash reward from him. So Sanchala is also the villain? Hell yes! This movie just got a hell lot better!

But no, not really. It’s either that director G Ashok is not willing to commit to what he wants, or he’s just really indecisive. He worked on too many layers that in the end, the movie turned out like a stretched rubber band (my dad came up with that phrase, btw).

Just when we thought Sanchala and Eshwar Prasad are both corrupt villains who are money-minded, G Ashok presents the audience with another twist. Turns out Sanchala isn’t corrupt, she was pretending to be so she could trick Eshwar Prasad into confessing to his crimes – which involves stealing statues from temples and manipulating Sanchala to pull the trigger on her boyfriend.

The director should have just left it at the twist where Sanchala and Eshwar Prasad are both corrupt officers and politicians. If he wanted to give the movie a happy ending, he could get both of them arrested and exposed for their devious plans. But no, he couldn’t commit to that. But why not? Why can’t Sanchala have been an unpredictable villain?

After going through all the trouble to peel the layers of the movie and unveil the twists, we now know that this movie is actually about an IAS officer who single-handedly took down a corrupt politician. But no, there’s another twist.

The movie ends with Sanchala confessing that she doesn’t speak Arabic, which is one the languages she spoke while Bhaagamathie “possessed” her. There is also a gush of wind that swept through the creepy mansion again, before we saw the credits roll.

So what is this, G Ashok? What do you want this movie to be?