Hariharan’s KL Concert – A Missed Opportunity To Showcase A Maestro

When the organisers of ‘Uyire Uyire: Hariharan Live In Concert’ announced that Padhmashree Hariharan was returning to Malaysian shores after many years, fans rushed to purchase their tickets and cleared their Malaysia Day weekend of any existing plans to witness the maestro. I made sure the Hariharan playlist was playing in loop days before the show in anticipation for the concert. 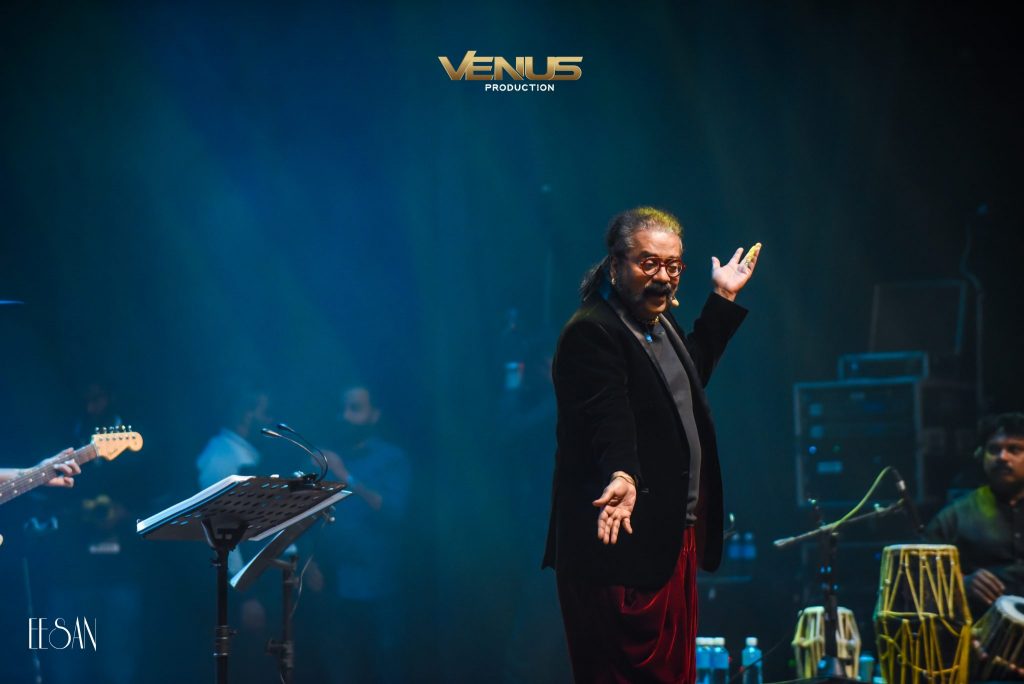 But, was it the concert everyone had hoped for?

A Full House For Hariharan

Uyire Uyire: Hariharan Live In Concert was held on 14 September at the KL Plenary Hall. The crowd was very well managed and shown to their seats in an orderly manner. Venus Productions picked a brilliant venue for this concert as the KL Plenary Hall has been built to deliver acoustic perfection to its audience no matter which tier or seat you are in with its technologically-advanced audio visual, sound and lighting systems. 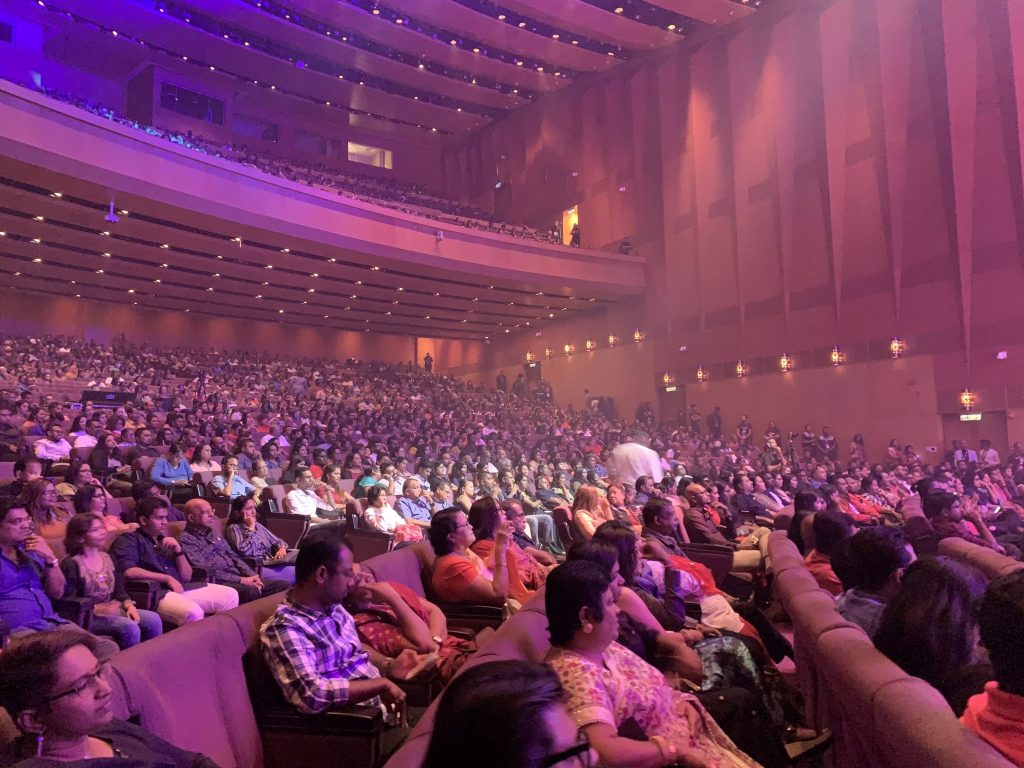 I had a good seat a few rows from the stage in the right corner of the hall, with a clear view of the stage. Unfortunately, no amount of brilliant acoustic engineering could have saved the evening from the unpreparedness and mismanagement of the sound system.

For a concert goer, there are only 3 things that matter: the singer, the music and the sound.

Unless you are at a rave, even visual and lighting effects are just added elements. During a concert, the sound technicians have the biggest responsibility of ensuring the singers, musicians and audience are in synchronicity and harmony. It was unclear who was to be blamed for the faulty sound system but the sight of sound technicians running on stage to fix microphones and mic packs were far from appeasing. 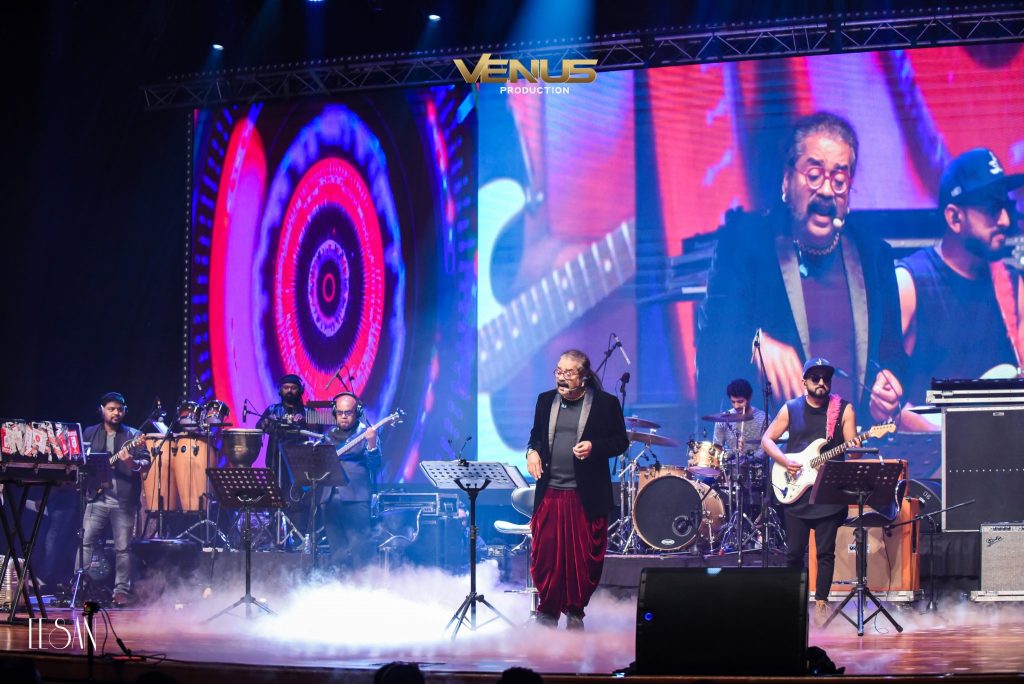 The singers were also clearly disturbed by the frequent technical mishaps that was happening. At one point, when the musicians started playing, singer Chinmayi had to interrupt the song and said that she was not receiving any feedback on her earpiece. She deliberately said, “If I can’t get my cue, I can’t sing this song”. The musicians were stopped halfway and had to restart the song after her earpiece was fixed.

In another episode, after a huge thud occured during ‘Telephone Manipol’ (most of us were actually confused and thought it was part of the EDM segment.. read on to know more), Hariharan jokingly said that he almost got a heart attack with the sound. Observing technicians running in and out of the stage, Hariharan said in much dismay, “So, this is what it has come down to.” Chinmayi Sripada In All Her Glory

Chinamayi Sriprada is definitely a force to be reckoned with, especially with how she has been spearheading the #MeToo movement in the South Indian cinema industry. On that night, Chinmayi reminded us of her immense talent and the mellifluous vocals that brought magic to the silver screens. 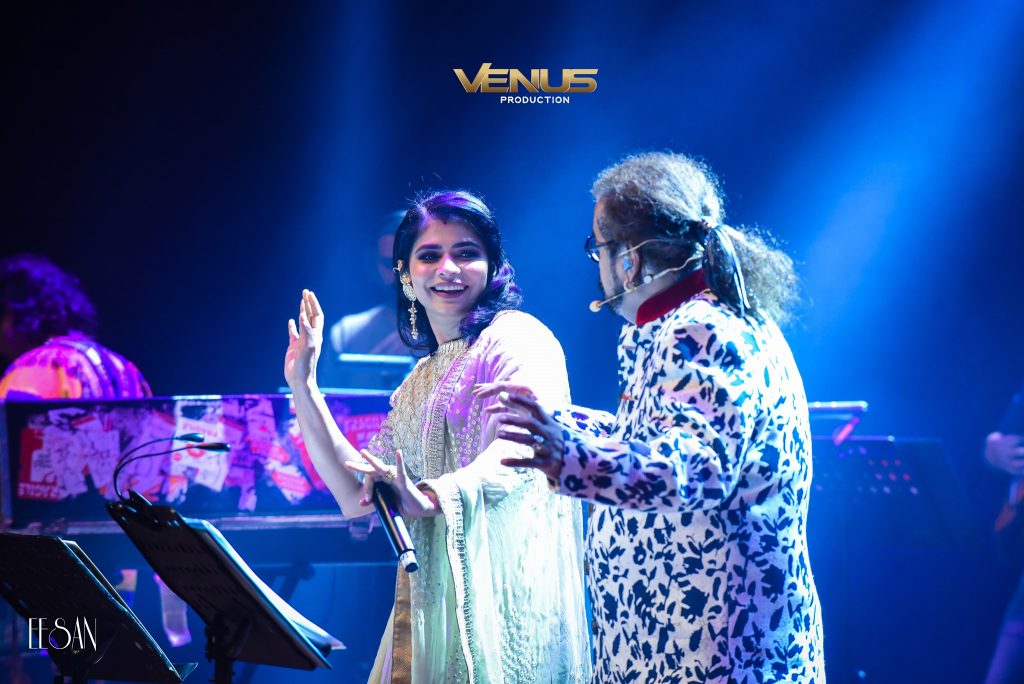 Dressed in a blush and mint lehenga with soft curls, she was relaxed and jovial on stage. It almost felt like she drew up everyone’s energy and focus with her stage presence. When she sang the 2002 hit Kannathil Muthamatil, the crowd swayed in reminiscence and nostalgia to her pitch perfect rendition of the AR Rahman masterpiece. Chinmayi effortlessly complemented Hariharan for the duet numbers such as Kurukku Siruthavale and Malargale Malargale and delivered an impeccable rendition of K.S. Chitra and Mahalakshmi Iyer’s verses. 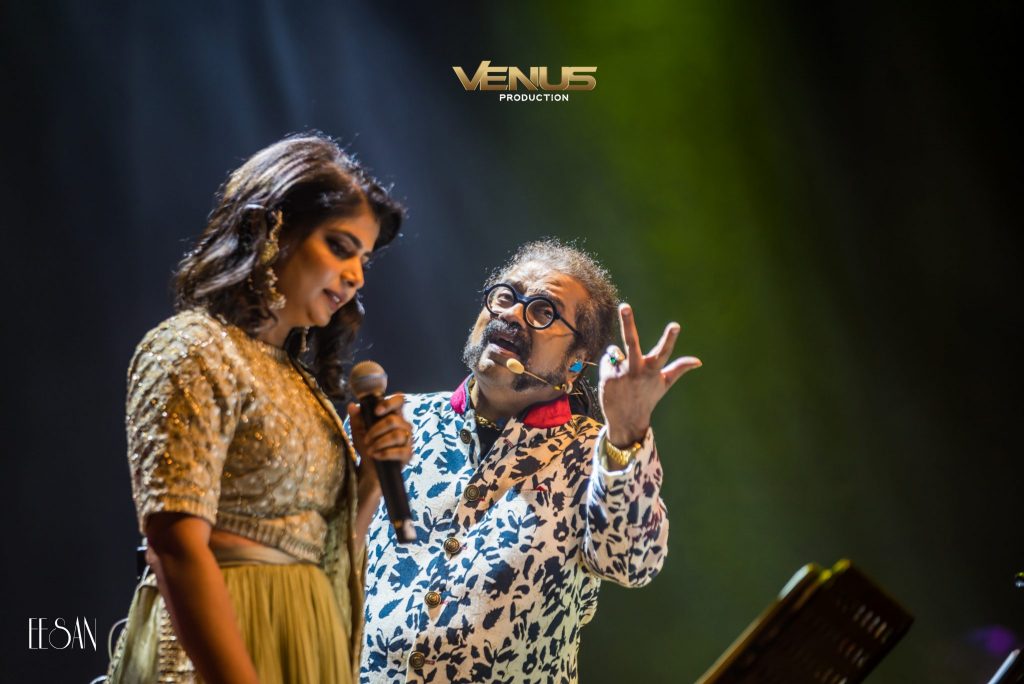 Naveen Kumar, The MacGyver Of Flutes

Everything about flutist Naveen Kumar had great vigour and panache; from his entrance, enthusiasm on stage and colourful outfits. The flutist’s segment was divided into two; one with him playing incredible tunes such as Ennavale Ennavale, Anjali and Vaseegara and the other segment, I would like to refer to as, the MacGyver of Flutes. 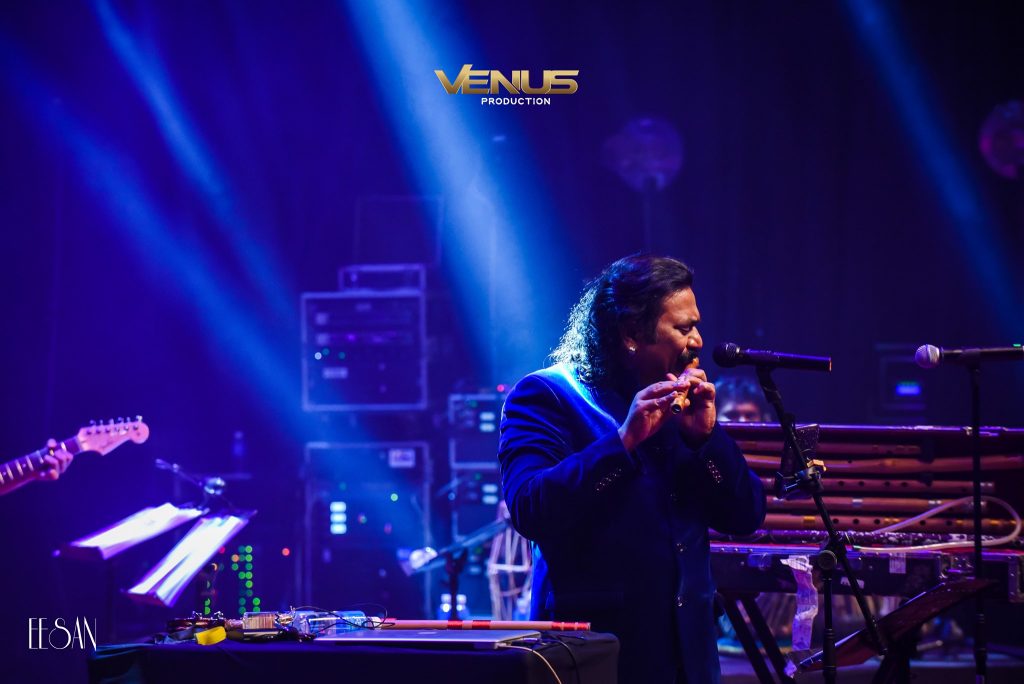 Naveen showed how everyday items such as a PVC pipe can be turned into a blow instrument and displayed many oddly shaped pipes and flutes that created a myriad of tones and sounds. The crowd was engrossed in the whole segment but the only problem was that it was already 10.20PM and very little of Hariharan was seen till then.

As people started anxiously checking the time and shifting in their seats, the emcee made a few weak attempts of ending the segment and moving the evening along but Naveen decided to stay put on stage.

A chameleon of conversations. A wizard with words. 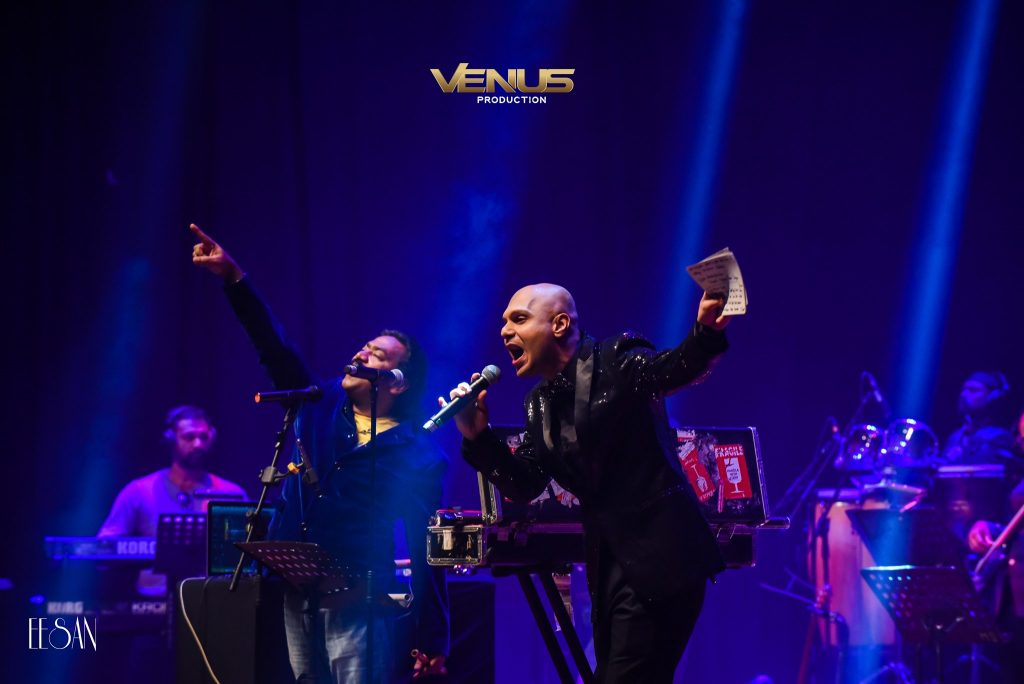 In more than one occasion, I have admired the warmth and linguistic breadth of MK as an emcee. MK was mostly entertaining and did very well at managing the thousands of people in the auditorium. It was clear that he had a following of his own as the crowd started chanting his name during an intermission and requested for him to sing a few songs.

MK was not spared from the reckoning of technical issues as his mic was turned off at the most awkward moments on stage. He tactfully managed the shortcomings of the show but unfortunately was a let down at moving the event along. As master of ceremony, I wish he had a stronger grip of the flow and transition between segments on stage. Perhaps, then, we would have seen more of Hariharan.

… And Suddenly It Was An EDM Concert!

At this point, I was so happy I didn’t bring my Patimma to the concert. I would have had to make sure her pacemaker was still working well.

Hariharan has always been experimental with music. The only problem with experiments is that, sometimes you fail at it, like this segment.

Hariharan introduced his son, Akhsay, in a special segment and humbly took centre stage to say that he hoped that the audience would give him their blessings as he just started his career in EDM. Unfortunately, it was apparent that Akshay did need lots more practice. Masterpieces like Telephone Mannipol and Romeo Aatam were butchered with tacky electro beats. The sound technicians were clearly underprepared for the vast difference in audio output and so all we heard was a rough bass exploding through the Plenary Hall speakers. I had buried my face in my palms. Whyyyyyyy?

I remember choking on tears in the cinema when I watched the 1995 film Indra. It was not when Indra was asked to marry a random guy from the neighbouring village. Not even when Indra’s father was stabbed to death. I cried when Hariharan’s voice flowed out of the speakers in a gentle, defeated version of Nila Kaigiradhu. When Hariharan opened the show with Nila Kaigiradhu, I knew that it was going to be a brilliant evening of tune and time. Hariharan performed his hits impeccably and his voice was no different than in the movies or stereos. His stage presence was both vibrant and ecstatic, as he broke into little dance moves and celebratory gestures throughout the playlist. 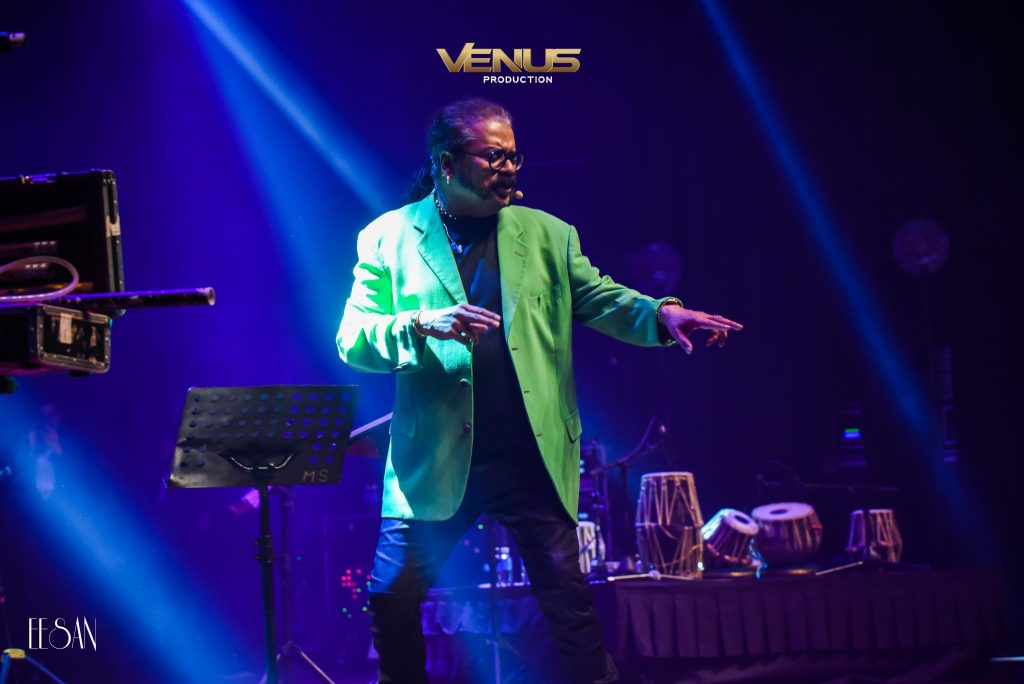 The auditorium was illuminated with swaying phone flashlight when Hariharan performed the 1999 Taalam hit, Kalai Maane. The crowd clapped and cheered on as he defied lung physiology by holding a note for over half a minute. The magnificence of his performance of Malargale Malargale moved the crowd to tears, as people sang along and were lost in the voice of this Ghazal extraordinaire.

As the evening unfolded, small mishaps turned into noticeable inconveniences. The poor time management gave Hariharan very little opportunity to be on stage. Two Malaysian movie trailers were played unnecessarily during the eleventh hour and you could see people sigh in frustration. It was almost 11PM and we had not heard some of his greatest hits such as Ay Hairathe*, Vaaji Vaaji and Thamizha Thamizha.

Hariharan ended the concert in a hurry to catch up with time by picking up tempo for Kurukku Siruthavale and ending the night with a performance of Uyire Uyire.

At the end of the show, I sunk in my seat, head hanging low and sighed in disappointment. This is NOT the Hariharan show I was looking forward to.

Hariharan, in all his eminence and lustre, needed more meticulous management and a commitment of perfection. It was a shame that an opportunity to showcase such incredible talents slipped through in the name of technical errors and time management. Perhaps in the future, things will look better. If there is one thing that is apparent in the Malaysian Tamil concert scene is that things get better with time and repetition. 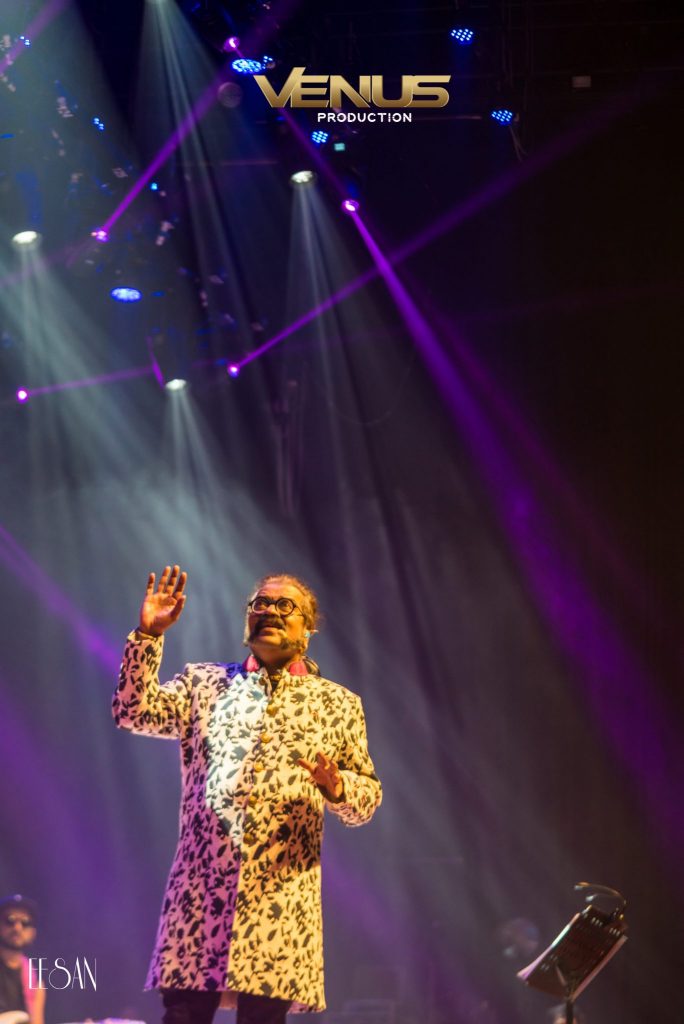