It’s pitch black, except for the small ray of light from your headlamp. You are trying to run, but it isn’t easy, as every stride is hampered by a thick layer of snow. You try not to think about the -15 °C temperature you’re in.

In spite of your base thermal layer, T-shirt, down jacket and windbreaker, you feel the chill in your bones. The wind picks up, and your headlamp keeps knocking onto your forehead. You look ahead and there is an obstacle, the monkey bars. You know you need to complete this, in spite of the cold. You know that you have 24 more obstacles to go. You know that once you’re done, you need to repeat this 8km run and 25 obstacle loop five more times, over the next 24 hours.

This is unimaginable to most of us, but Malaysians Thayaparan Sithambarapillai and Jayakumar Tharmalingam experienced this as they took part in the Spartan Ultra World Championship 2019 last month, in Åre, Sweden.

The annual race is one of the most grueling endurance events held. It is a 24 hour race, which saw athletes from more than 40 countries participate. The race consisted of six 8-km course loops, each of which had 25 obstacles including the Spear Throw, Monkey Bars, Rope Climb, Sandbag Carry and Tire Drag.

Varnam speaks to Thayaparan and Jayakumar about the race.

Thayaparan, fondly known as Thaya, had been aiming at the world championship, “This year, I went for the Southeast Asian series of the Spartan race, and I qualified for the world championship. I decided to take my chances and gain as much experience as possible by competing with athletes from around the world,” he tells us.

Before that, Thaya was all about marathons. He came across obstacle course racing one day, “I knew that I wanted to work on my strength training. This was really my kind of activity, so I went for it,”

“I decided to take my chances and gain as much experience as possible by competing with athletes from around the world,”

The Klang-ite completed the Spartan Ultra Championship in Åre within 22 hours. “Although I have encountered extreme temperatures in the past, like when I scaled Mount Kilimanjaro, this was a totally different ball game,” he says. “Thanks to the snow, I couldn’t move as quickly as I usually would. Also, the waterproof gloves I was using occasionally compromised my grip, and I had difficulty completing the obstacle,” 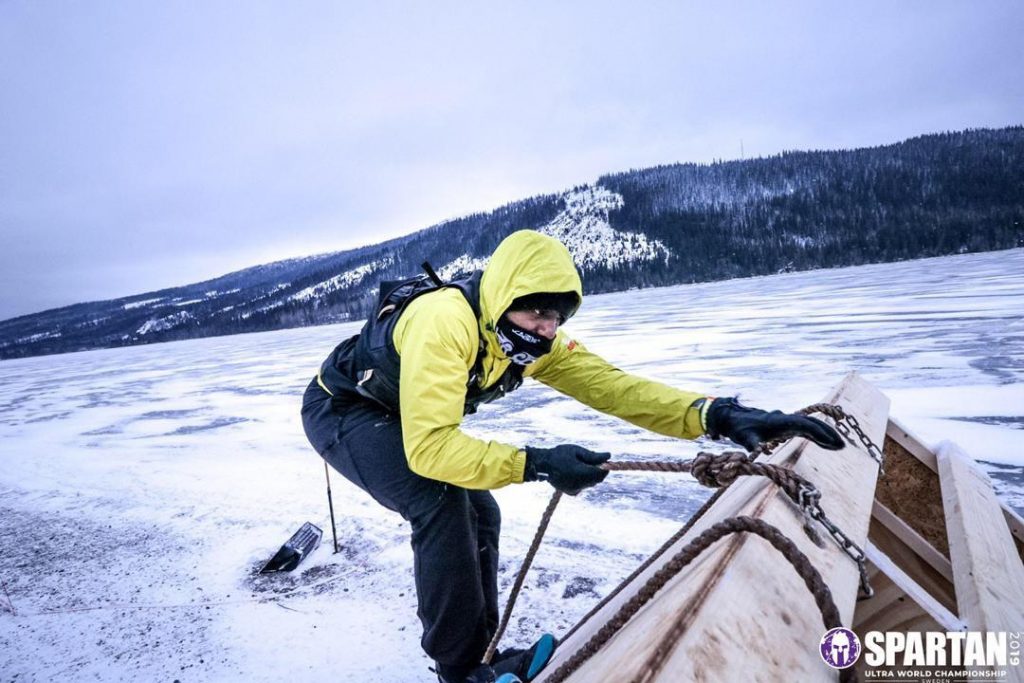 But none of that stopped Thaya. “I thought to myself, I am already here, there is no way I’m going to give up,”

There are a few types of races under the Spartan banner. “There’s the Sprint, which is 5 km with 20 obstacles, Super that’s 8 km with 25 obstacles and Beast which is 20 km with 30 obstacles,” Thaya explains. There is also the Spartan Ultra race, and the Spartan Trail.

“To qualify for Trifecta Championship held in Greece, a participant needs to complete a set of Sprint, Super and Beast races in one calendar year,” he tells us. This was no issue for the 33 year old. He has been joining Spartan races since it was introduced in Malaysia, back in 2015.

Thaya then journeyed to Greece with the other two Malaysians, where they completed the Trifecta World Championship which consisted of the Sprint, Super and Beast races over a period of two days. Thaya tells us that this has been his dream, “I have always wanted to do the Spartan race in Sparta, and it was fantastic,”

“I thought to myself, I am already here, there is no way I’m going to give up,”

Each race earns the participant a wedge, and three wedges add up to one medal, an X. Thaya is now an X6. “I have completed 18 races all over the world, this includes twelve Sprint and Super races, three Beast races, and three Ultra races,” he tells us.

“The Spartan race is held four times a year in Malaysia, but none of them are 24 hour races. Only the World Championship is,” Thaya tells us. 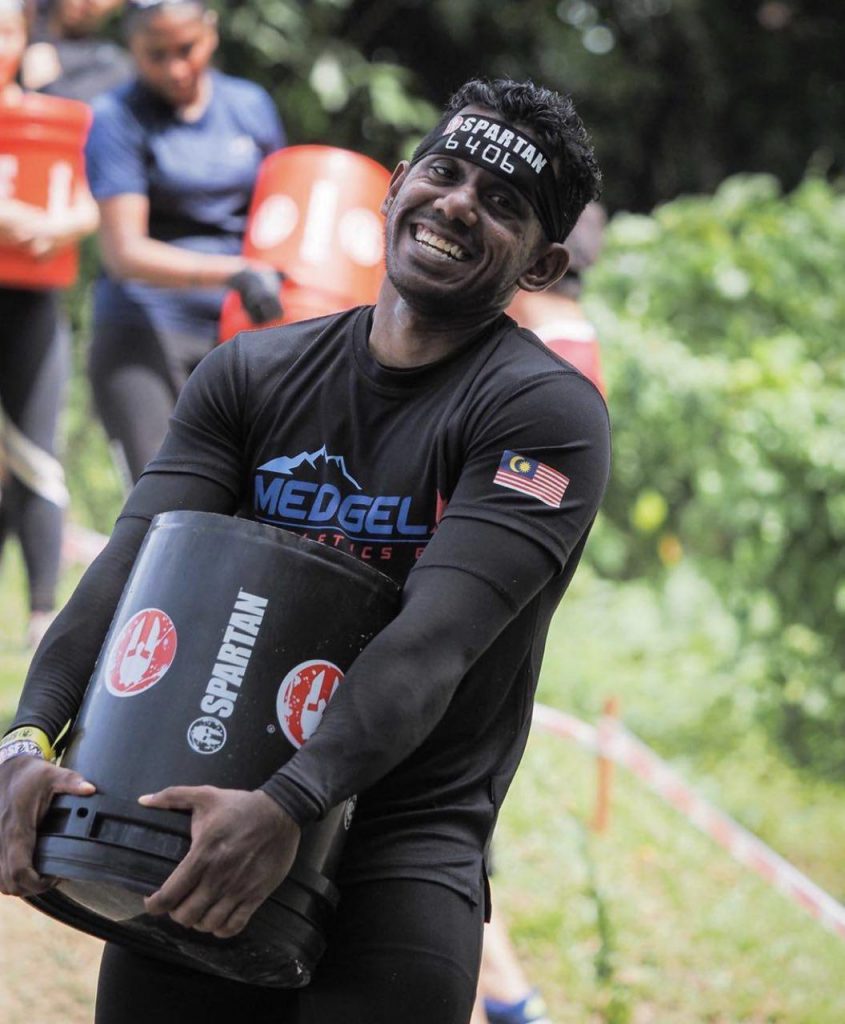 Thaya’s motivation comes from his surroundings, “My family encourages me a lot, especially my dad. I also have made some good friends in this community, and we motivate each other, which is great,”

He occasionally has to sacrifice family time, “This Deepavali, I was on a race in the Philippines. Thankfully, my loved ones are supportive. I mean, it’s not like I’m doing anything wrong. But I know that if I keep missing celebrations, I will end up homeless!” he laughs.

As for his training, Thaya relishes his time in public parks. “I enjoy running in the parks, and I use the bars and equipment to train,” he says. “I usually spend my weekends training there. During the week, I head to the gym,” 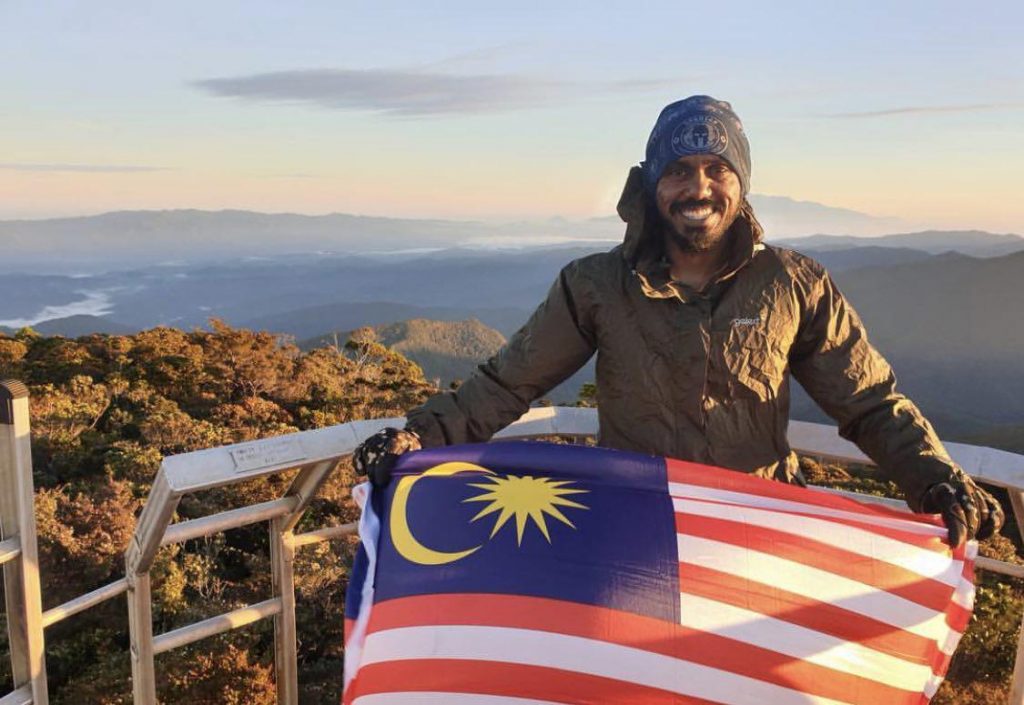 Thaya cleverly balances his day job in the finance sector with his passion for fitness, while he does work remotely when he travels for extended period of time, it is something he can handle. He has an understanding boss to thank for that. “My boss is so supportive, and she encourages me too. She once asked me, “Don’t you ever take annual leave for relaxation?” I suppose this is what relaxes me!”

The fitness enthusiast may travel around the world for races, but his true Malaysian comes out the moment he lands in KL. “After I get back from a race, I’ll have a heavenly banana leaf meal! Either that, or nasi lemak,” Thaya gushes.

Penang native Jayakumar, better known as Jaya, has always been into obstacle course racing. But he stumbled upon it by accident. “After a decade-long hiatus from fitness, I saw the Viper challenge in Malaysia, and without any research, I signed up for the 20 km race. I didn’t even prepare, and for the first 2-3 km I was cursing myself in all the expletives I knew,” he laughs. 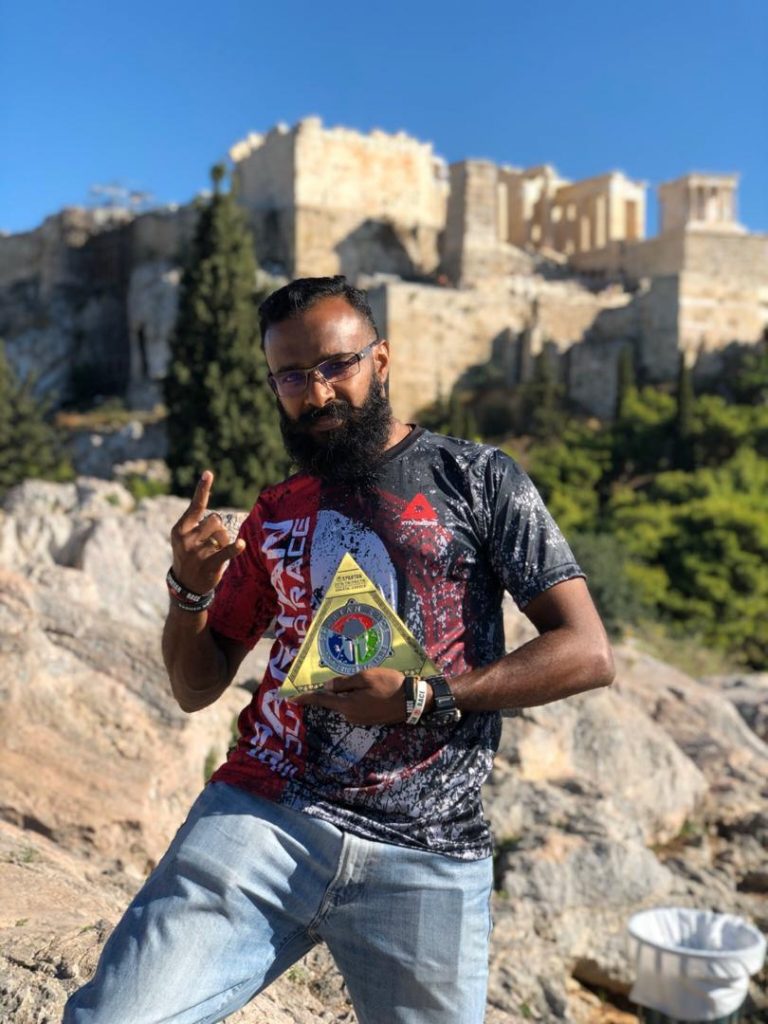 “At the end of the race, I told myself that I am not going to do this anymore. That didn’t last, obviously. I saw another race come up, and I signed up again. It became an addiction!” Jaya tells us.

In spite of completing the Viper Challenge, the 36-year-old was shocked when he saw the intensity of the Spartan race. “It was brutal. And I had signed up for two races, one on each day of the weekend. I didn’t have a choice! I had already paid, so I just went out and did it,”

It was love at first race. Jaya then decided that he wanted to do something out of his comfort zone, “That’s when I came across the Spartan Ultra World Championship. So I did what I needed to to qualify for the race,” Jaya is now at the level of X7 on the Spartan Race. Jaya’s biggest competition is himself. “I like to keep challenging myself. It began with Viper, and progressed to Spartan. I have even completed the Tough Mudder Australia Mud Run!”

Having been vegetarian for the past 12 years, Jaya’s training has never wavered. “I train every day for about 3-4 hours. I only run for 5km each day, though. Then I will work on workouts such as the battle rope, monkey bar and cycling. Some people prepare for the snow by undergoing ice baths, and things like that. I didn’t. I just trained as per usual,”

“People always ask me, how do I attend and complete so many races with such a simple training routine?” Jaya laughs. “I tell them, it is all in your mind. If you want to do something, you’ll do it, by hook or by crook. If you keep saying nevermind lah, it will be nevermind forever,”

If you want to do something, you’ll do it, by hook or by crook. If you keep saying nevermind lah, it will be nevermind forever,”

In spite of experiencing snow for the first time in Sweden, Jaya completed the race in 22 hours. “I have completed a 24 hour race before, but this was the first time doing it in such extreme weather conditions,” Interestingly, Jaya never wanted to throw in the towel. “At no point did I feel like giving up. I knew that I could complete it,” 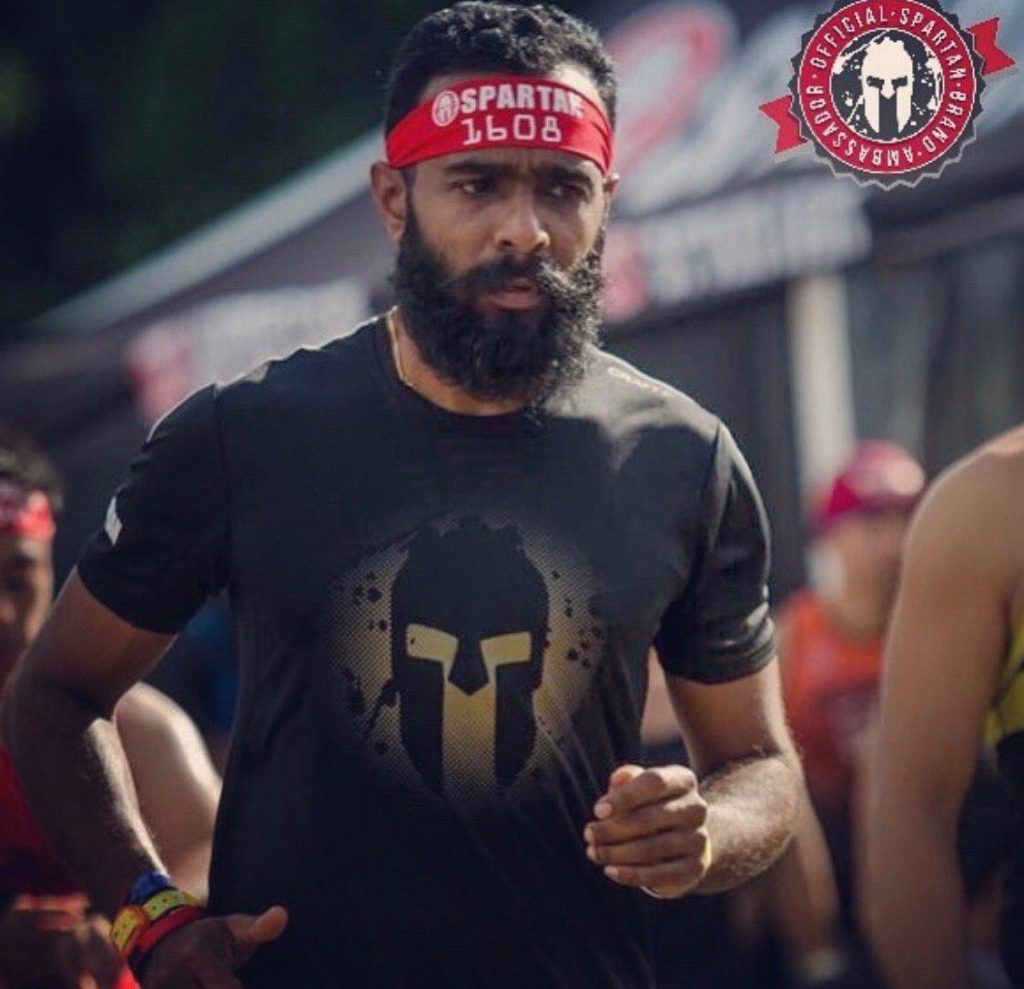 “We did rest in between laps, of course. We can push ourselves to the limit, but if our bodies shut down in the middle of the course, that’s it. There’s also a rule that says if you do seek medical attention for more than 30 minutes, you’ll be disqualified,” Jaya tells us. “So resting and pacing yourself is important,”

“resting and pacing yourself is important,”

His biggest motivation, however, is himself. “I usually go on my own for races. I don’t really wait around for a group to join me. Last year, I was the only person from Malaysia who attempted and completed the Trifecta Challenge in Sparta, Greece,”

“As for 2020, I’m definitely going to participate in more races. I have plans to try out some of the hardcore races like the Tough Viking (the toughest obstacle race in Scandinavia),” Jaya also has his eye on the Obstacle Course Racing World Championships.

Keep up with Jaya’s obstacle course races on Instagram here. Thaya’s passion for the sport is chronicled on his Instagram profile here.

Jaya and Thaya are open for sponsorship for their upcoming obstacle course races. Their contact details are on their social media handles.