“Ada get up and dance, it’s a darn new chance, un kayil ellame irukkudhada,” It was as if Benny Dayal was dancing to these very words, he commanded the stage and commandeered the audience.

When PettaRap Mashup Live was announced a few months ago, we flinched. Arena Global International, yet another first-time Tamil concert organiser? Their lineup, however, piqued our interest. Only Andrea Jeremiah and Benny Dayal with their respective bands over a period of four hours. 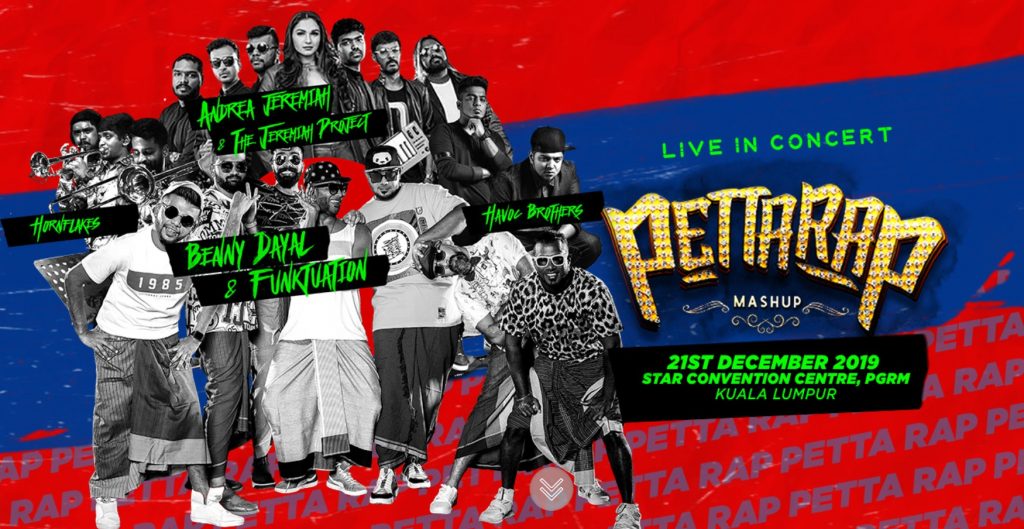 This was a risk. Most first time concert organisers would have brought over veteran singers or a young singer with a stupendous following.

Don’t get us wrong, both Benny and Andrea have their respective fan bases, but bringing two singers who don’t have a Sid Sriram-like following during the year end holidays is asking for trouble. Arena Global International went forward with it. And boy, did it pay off.

The venue change from StarXpo Centre to PGRM hall was a welcome move. We didn’t have to walk through the horribly dilapidated KWC Fashion City, nor traverse through a carpark.

Multiple working lifts greeted concert goers within a few feet of the entrance and before we knew it, we were at the foyer of the concert space. The exchange of tickets for a stamp on the back of our hands was a quick process. 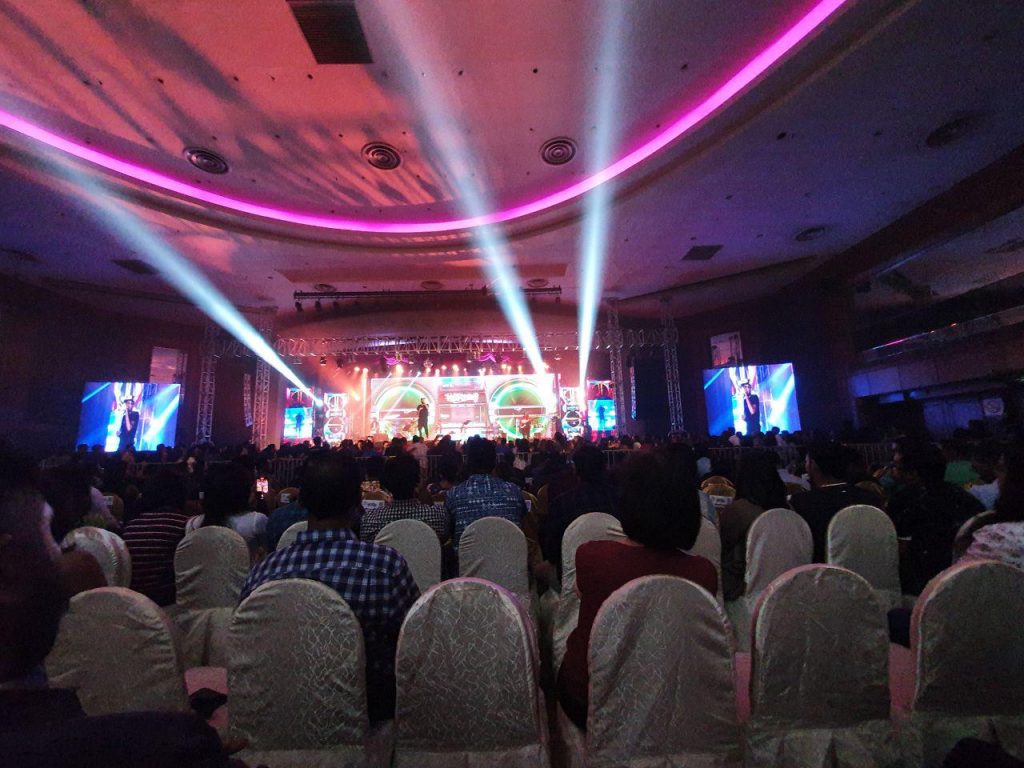 In spite of a venue space that resembled a banquet hall, the stage was at a good height. The crowd was significantly smaller, but that worked fine, as we were closer to the stage, plus the air conditioning was on full blast. The food sold outside was reasonably priced, with beer only allowed inside the hall in plastic cups.

Usherers were aplenty, and they had been briefed clearly about what is where. There were so many of them that it was almost impossible for someone to not find their way around.

The backdrop of PettaRap Mashup comprised of five LED screens. There was the main one, a wide screen extending the entire stage, as well as two shorter panels on either side. In addition to this, there were two screens on either side on which the performance was projected on.

The visuals on the LED screens were some of the best we had ever seen in a Malaysian Tamil concert. Big Show Asia deserves a standing ovation for that alone.

There was the initial confusion of the starting time. On the Airasiaredtix website, it was stated to be 7.15 pm, whereas on Arena Global International’s social media, it was 7 pm. A few hours before the event, the organisers updated their social media channels with a post saying the event begins at 6.30 pm. This was quite alarming to those of us who had planned our journeys.

Nevertheless, hosts Theyvekgan and Revathy announced that the concert will commence at 7.20 pm. The first act walked onto the stage five minutes later. 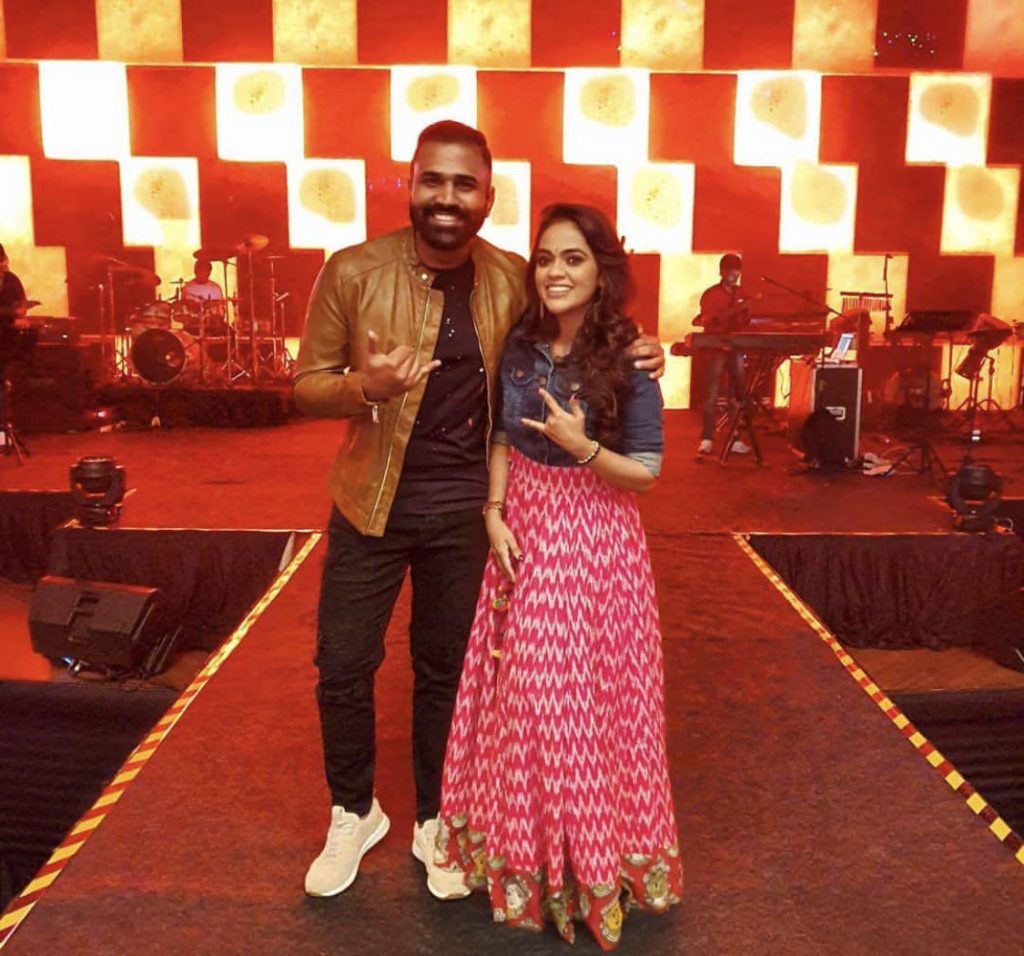 The hosts were an amalgamation of Astro and RTM. Theyvekgan was absolutely brilliant as the emcee. It is puzzling why he doesn’t handle more live shows. Revathy did well too. The two were initially struggling to buy time between the performers, they eventually were candid with us, and told us what they were tasked with. Things were a lot smoother from then on. Well done, both of you.

Havoc Brothers opened for the two big names. It came as a pleasant surprise that Naven and Mathan were excellent on stage. Their stage presence was great, and they interacted well with the audience. Most importantly, their rapping skills were on point.

Their 8 tune set, while a little longer than expected, saw the two of them giving it their all, to the point that they had to be handed tissues as they were perspiring uncontrollably. They ended with their tune Karat, which had a fantastic visual backdrop on the LED screen.

Tiamo Dancers then came in for a brief fire dance in their glittery costumes.

In a gorgeous glittering blue minidress, Andrea started off with a beautifully rearranged Idhu Varai. The sound system began a little loud, but it was quickly rectified.

Andrea’s energy levels never wavered throughout the one hour set, with rock version of the classic Vaa Vaa Pakkam Vaa, followed by Crazy Minnal, Kalyana Vayasu and Kannum Kannum Nokia. The slow numbers, too, were close to perfection, especially her rendition of Ennadi Mayavi Nee.

Her sensuality was in full form as she performed Aasai Adhigam Vechu, much to the audience’s delight. There was a moment during the song, where all we could see was Andrea’s silhouette dancing against the neon striped background while Keba strummed his electric guitar. We were momentarily transported to musical heaven.

The music transitioned into a kuthu beat seamlessly as she began to sing Who’s The Hero, and her final note took the concert up a notch.

The popular Nee Partha Parvai received an incredible rock facelift thanks to Andrea and her band. She was evidently comfortable performing with The Jeremiah Project. Comprising of Leon James on keyboard, famed guitarist Keba Jeremiah, Navin Joseph on bass as well as David Joseph on the drums and Krishna Kishore on percussion, the band certainly didn’t disappoint.

Andrea’s well-paced set list, which balanced high-energy numbers with slower breathers, ended with her singing both the male and female parts of Google Google.

As she ended her hour long set, the singer thanked the audience, “This is the best birthday present, I just love being on stage!” It certainly shows, Andrea.

It was then time for Theyvekgan and Revathy to buy some time as the next band set up. Luckily they stumbled upon a few people in the mosh pit who could sing. This is where the organisers faltered a little. Why not schedule a filler? The dancers would have worked too.

From the first note of Benny’s Taxi Taxi, the audience was swept into another world. With the funky background visuals on the LED screen, it is as if we were on a hallucinogen for the two full hours that Benny took the stage.

Clad in a funky multi coloured blazer with short pants and sport shoes, Benny launched into Unnakenna Venum Sollu. The audience knew that things are going to get crazy when Benny took his jacket off. Sure enough, he broke into Usilampatti Penkutti before chugging into Chikku Bukku.

He unabashedly flaunted his incredible vocal range, ending Omana Penne with a high note that we might never forget, casting a cozy blanket over the crowd. At one point, the music begins, but he stops the band, and sings, “Anbe…” As he holds the note, we swoon, knowing that he’s getting into into Ennai Kaanavilliye.

He also sang a few of his Hindi hits, including Bang Bang and the epic Badtameez Dil. Besides his tremendous voice, Benny’s hip hop dance moves and body waves were met with an avalanche of screams. 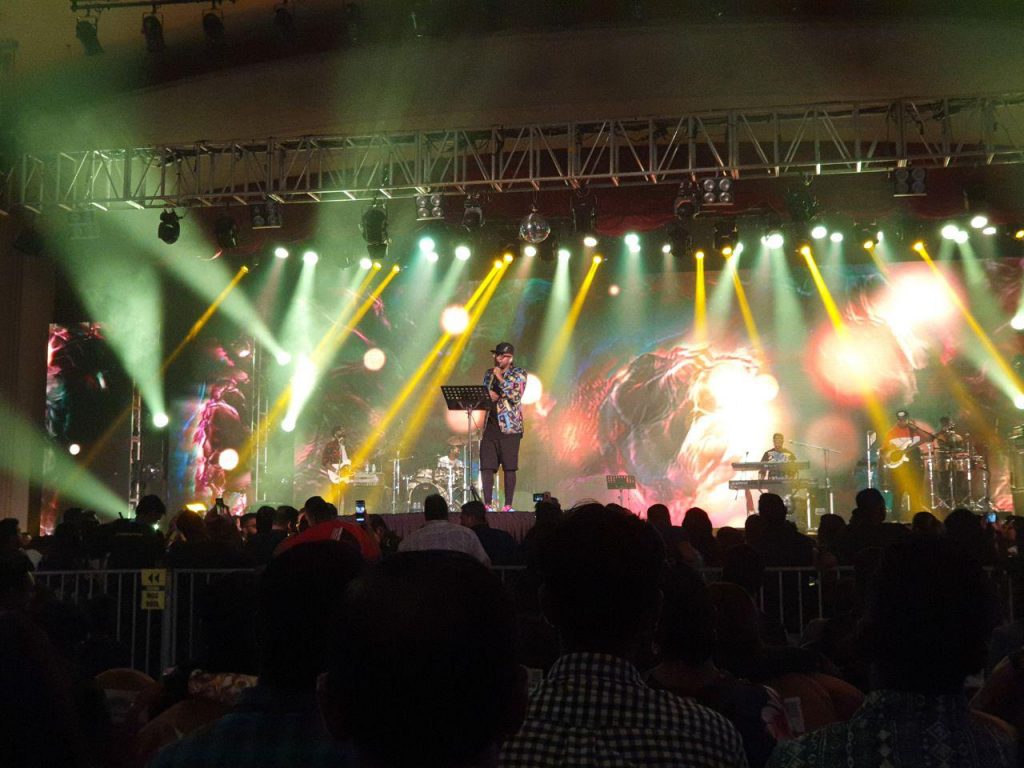 Remember the five LED panels we told you about? Benny’s live on-stage performance was splayed onto the smaller panel, a feat we have never seen before.

The insanity level peaked during Benny’s performance of Petta Rap. As he began to sing, he picked up a gun like object from the ground. The audience was left deliberating what this object does, but that didn’t stop us from rapping along with Benny for one of A R Rahman’s most iconic tunes. As Benny gets into the hook of Petta Rap, he shoots, and a steady stream of smoke is expelled from the gun, and we realise, goodness, this is a freaking smoke gun! At this point, we, the audience, lost ourselves, and were immersed completely in Benny Dayal’s awesomeness. We later learn that the gun is a carbon dioxide gun.

Benny’s set ended with the audience on their feet, dancing to Mukaala and his single, Tamil Fever, smoke gun in hand.

The Funktuations were the unsung heroes of the night, with David Joseph, Alok Merwin, Carl Fernandes, Joshua Satya and Alwyn Jeya Paul keeping the energy up the entire time. They were joined by trumpet and trombone duo, The Hornflakes, Rahul Joshua Thomas and Rakesh MS.

Benny Dayal is the antithesis to the cliched Tamil singer. He sings, he dances, he performs, and he makes you feel like he’s doing it all for you, not the others in the audience, just you. His charisma and vocal versatility shine bright with every song. Benny is undoubtedly one of the best Tamil performers of our time.

Going home after PettaRap, it was as if we finally had a super satisfying session of something that we’d been deprived of for a long time.

Let’s call the PG version of this a cupcake. You enjoy cupcakes, and you’ve had some pretty good ones in the past, but the moment you took a bite out of this Arena Global International creation, you realised that it’s a game-changer. You aren’t going to be able to have another mediocre cupcake, because this one was so damn good.

The layers of music, visuals and vocals resulted in a rich, eargasmic experience one might never forget. The competitors need to up their game if they want to match the first time organiser. That night, we went to bed satisfied. Fulfilled. The orgasmic, I mean, eargasmic performance that Benny had put out is something that will be difficult to top in 2020.

I dare you to prove me wrong.