Suthasini Rajenderan has been a familiar face on television for close to a decade now. After winning the prestigious Vasantham Star 2011, the Singaporean crooner went on to participate in the Malaysian singing competition, Astro International Superstar 2015, before making it to the finals of the Indian singing contest, Singing Stars.

Suthasini recently made headlines when she created a Tamil song out of the hate comments she has received on social media. She released her hate comments song on YouTube, and it was a hit. Suthasini successfully named and shamed the many cyberbullies hiding behind their keyboards who didn’t hesitate to leave nasty comments on her previous videos.

Varnam catches up with Suthasini to discuss the dark turn social media has taken, and how her spirit remains unshakable throughout.

Varnam (V): What made you create a song out of the hate comments you’ve received?

Suthasini (S): Actually, I first created a video in response to all the hate comments I’ve received. There wasn’t much reach with that, but people began asking me for a part 2. I figured, why not do it in song? I’ve seen American YouTubers do it in English, but nobody has ever tried this in Tamil, so let’s give it a shot!

V: You’ve been in the industry for about a decade now, and you’ve witnessed the rise of cyberbullying. What are your thoughts on this recent phenomenon, and how did it affect you as a person?

S: Back in the day, there were platforms like Facebook, but people weren’t as nasty on there as they are now. Slowly, they became braver.

I’ll be honest, at first, it did affect me. They began commenting negatively on my appearance instead of my talent. YouTube has been the harshest platform for me, and as a young artist, it was challenging.

Not everyone will have the confidence to continue what they are doing when faced with comments like that. Many stop, because it creates a lot of self doubt.

I think I was lucky, because I have my immediate family and friends. There were also so many people who supported me across the board on social media. And the most beautiful part is, I receive so much more love than hate.

What really encourages me is the love and support I receive from young girls.

What really encourages me is the love and support I receive from young girls. I want to set an example for them, and help them build their self esteem, so that the negative comments don’t affect them. 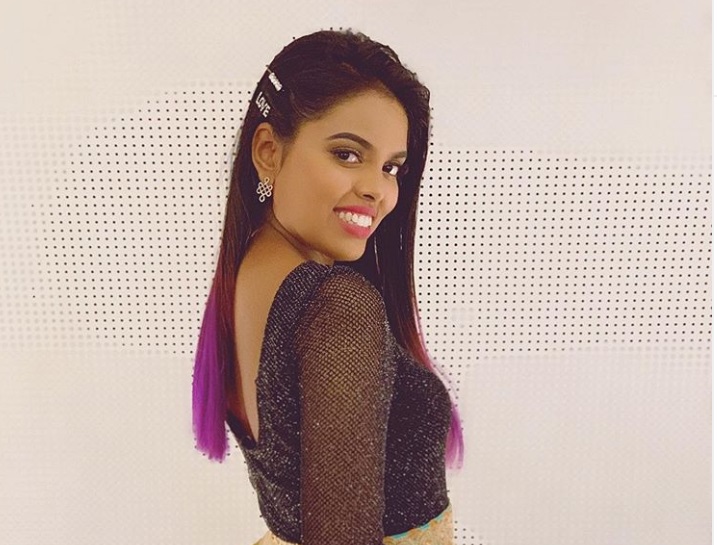 V: People have taken the most harsh decisions as a result of cyberbullying. Late last year, two South Korean popstars committed suicide. Do you think this has effect on the cyber bullies themselves?

S: Honestly, the world doesn’t have to be so mean. If you are taking so much effort to be this nasty to someone else, it might be time to sit down and think, why are you doing this, and how will you feel if something like this is done to you?

There are two types of criticism. One is constructive criticism, from which we can learn and improve ourselves. The other is to make the criticiser feel superior by putting others down.

Cyberbullies have a self esteem issue, and they really need professional help. If your friends are bullying others on social media, call them out. Don’t laugh and join in the fun. What good is it really going to do in the long run? It’s totally fine to make jokes, but come on, not at the expense of someone else’s feelings. 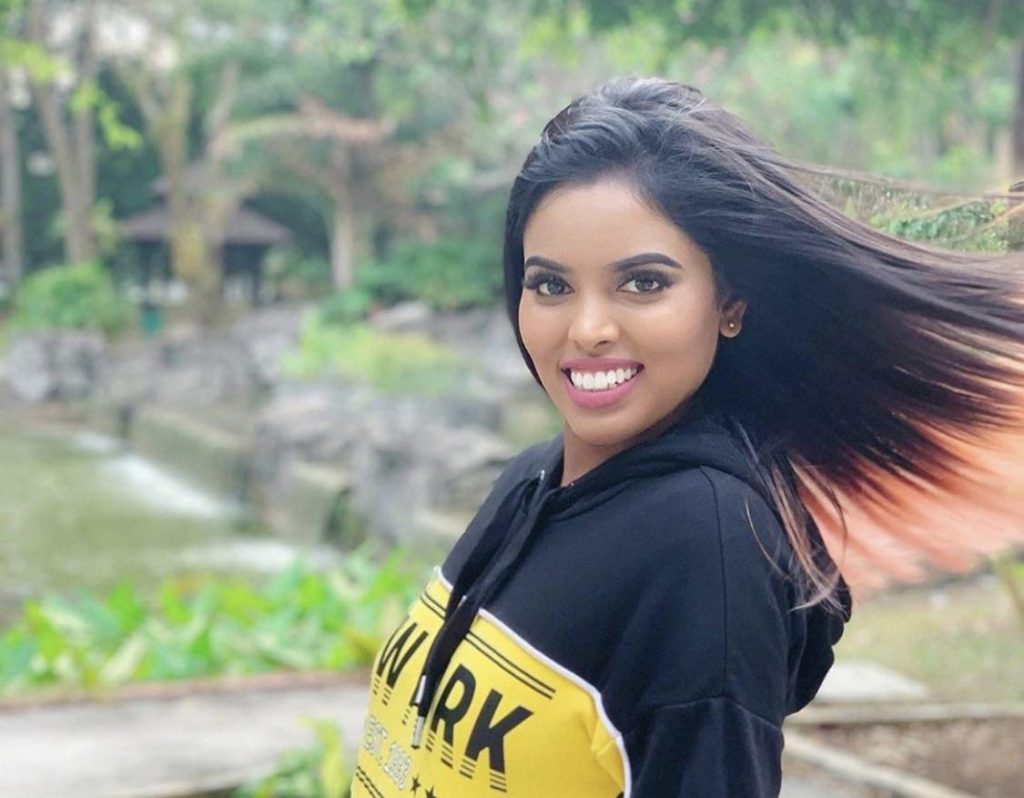 V: Moving on to your singing, anyone who’s seen you perform knows that your stage presence is unparalleled. How did you build on this skill?

S: Thank you! When I took part in the Vasantham Star singing competition back in 2011, I was so new to the television industry. There I was, surrounded by all these amazing talents who could sing and dance. I realised very quickly that I needed to do more than just sing. Every week, I would learn a new skill, and I slowly built my stage presence there.

If fact, every time I participate in a new competition, I take it as a learning curve. I learn not only from the judges, but also from my co-singers. One thing that all these experiences have taught me is that it is NEVER just about singing. It is about how you entertain the audience. This ranges from how you project your voice to how you interact with a camera.

every time I participate in a new competition, I learn not only from the judges but also from my co-singers

V: You’re a performing artist as well as a recording artist. Where does your calling lie?

S: My real calling is definitely as a performing artist. I love being physically present with my audience. And you know, when you’re singing live, the scene and the feel is totally different. You also get to receive people’s response immediately. It is that energy that keeps me going. 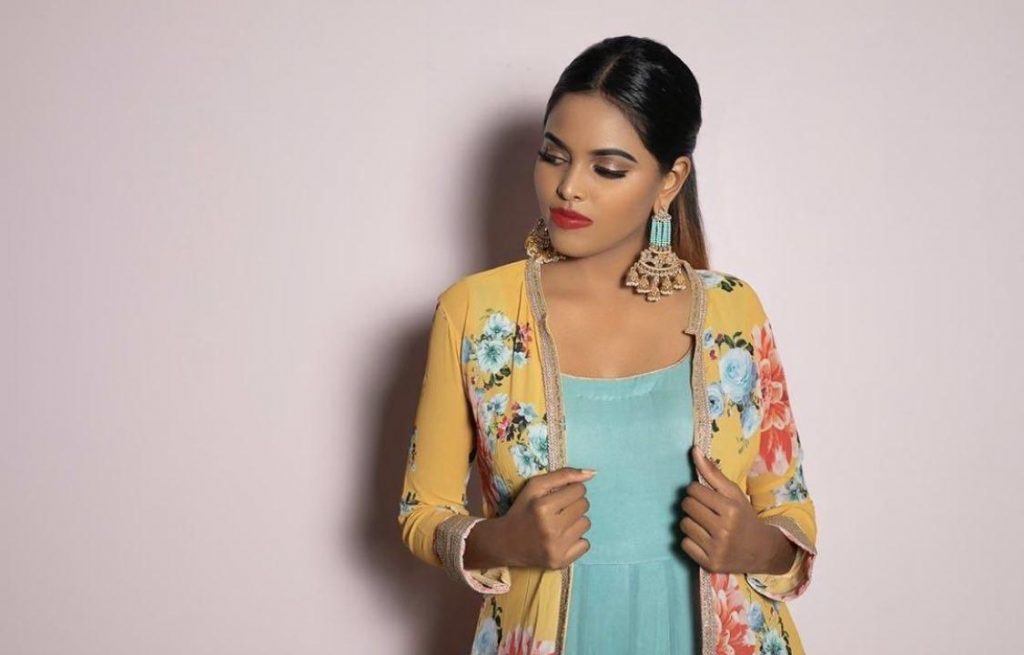 V: Tell us about your all girl Tamil band, Girls Empower.

S: I’d love to! When it comes to musicians and live bands, women are the exception. Occasionally, there will be one girl playing the guitar. There certainly aren’t as many female musicians in the Tamil sphere across Asia. There also isn’t one all girl Tamil band. Which is ridiculous, because there is no rule that only men can be in bands.

Creating this was challenge, because it was not easy to find women who played the instruments and had performed before. I was able to connect with a few, and I even went online to look at YouTube musicians.

as a singer, I think it is imperative to bring up instrumentalists.

As a singer, I think it is imperative to bring up instrumentalists. Right now, people only look at a song by the singer, for example, they’ll say, this is a Sid Sriram song. But the truth is, so many people have worked on that track, not just Sid. It isn’t right to only identify the singer because he is playing the main role in expressing the song.

I also want to encourage the band culture, so that more people will be supportive of independent artists.

V: You came from a regular household in Singapore, and there are so many aspiring Tamil singers who want to reach the heights that you have. Any advice for these budding Tamil singers?

S: There may be many stereotypes out there, many unwritten rules. Ignore all of these! Don’t even think about what people would say, because that’s what will stop you. Go out and work towards your dream.

It’s a great time for us musicians. Indian media is now focusing on the Tamil diaspora, and people like Mugen Rao have attained success on a different level. If you work hard enough, the possibility of being an international artiste is definitely achievable.

If you work hard enough, the possibility of being an international artiste is definitely achievable.

V: What is your dream, Suthasini?

S: My dream is to be an international artiste, for people around the world to listen to my music, and in doing so, hear the message that I’m trying to get across. I want this to impact someone’s life positively. Ultimately, I want to be an independent artist who is appreciated for their music and lyrics.

Keep up with Suthasini on her Instagram here. Her latest tune, Dark & Lovely, releases tomorrow!