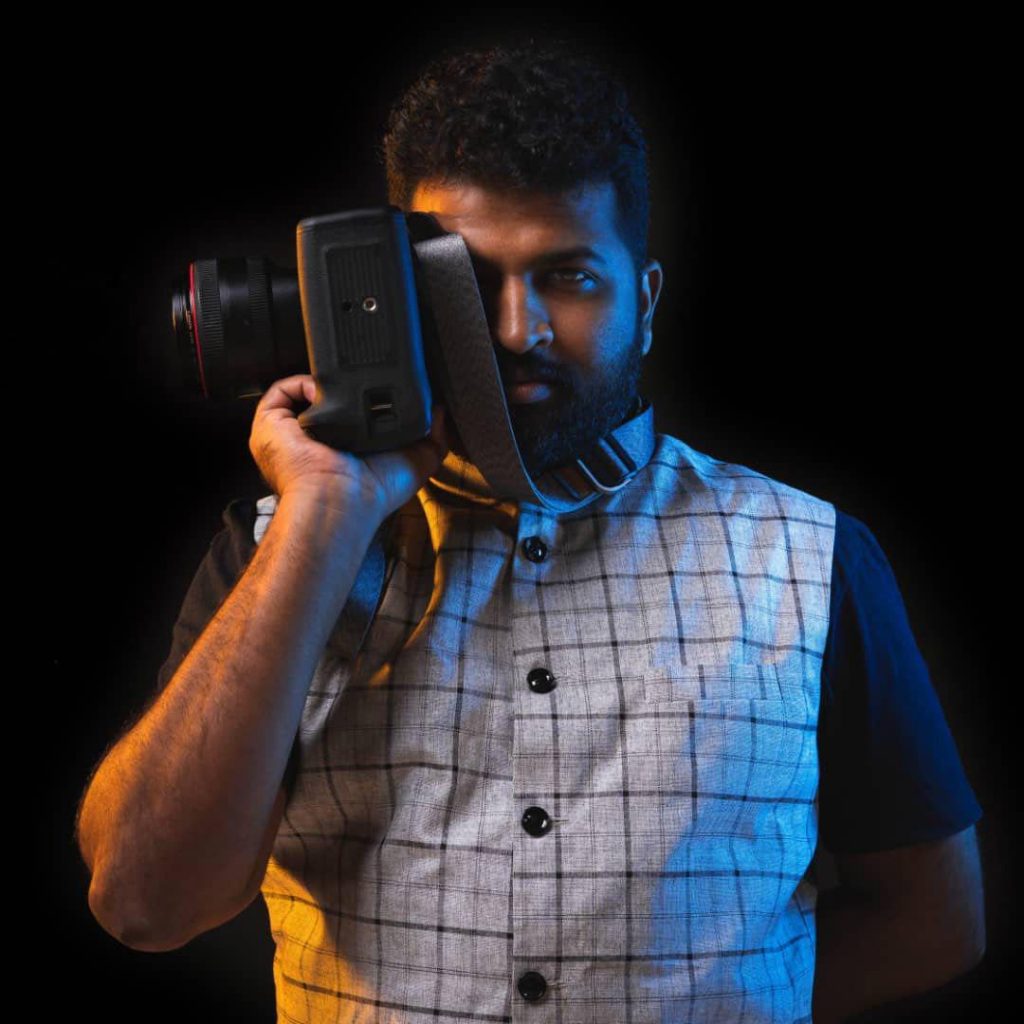 Anyone following Barathan Amuthan on social media would know that he has three passions. Music, photography and hairstyling may be completely unrelated, but Barathan’s journey has fused his three loves, with a pretty awesome result. He was recently awarded the Canon EOS Youth Ambassador position for the second year in a row. 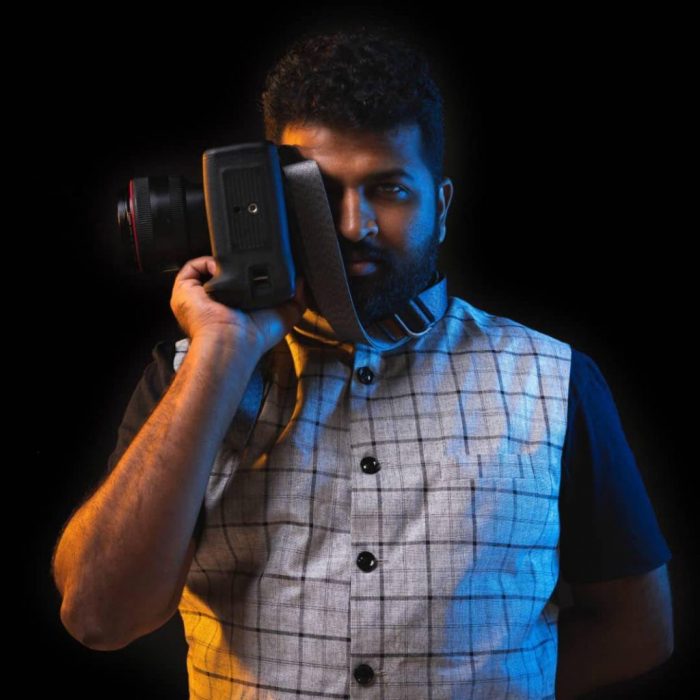 The Varnam team catches up with Barathan to talk to him about his fierce adoration for the three fields and how they all tied together to create the life he lives now.

Varnam (V): One of your passions is hairstyling, we hear you have your own hair salon as well. Tell us about that.

Barathan (B): I’ve actually been styling hair from a young age. My father is also a hairstylist and photographer.

For the past decade, I’ve been running my own hair salon in Petaling Jaya, it’s called Shaktees Salon. It’s something I’ve been doing for a long time, from school actually. My classmates will be my mangsa usually! (Laughs) I would cut my friends’ hair and the teachers knew this, because they’d never confiscate my scissors!

In my salon, my techniques are different from other hairstylists. I haven’t straightened any of my clients’ hair for more than 8 years. I tell them to grow their hair out and I’ll teach you how to maintain it.

V: How did your passion for hairstyling turn into photography?

B: I always say that hairstyling is my profession and photography is merely a passion.
I recall how when my father and I watched Tamil films together, he would to tell me about good cinematographers like PC Sreeram and Santosh Sivan. That left a huge impression on me from a young age. 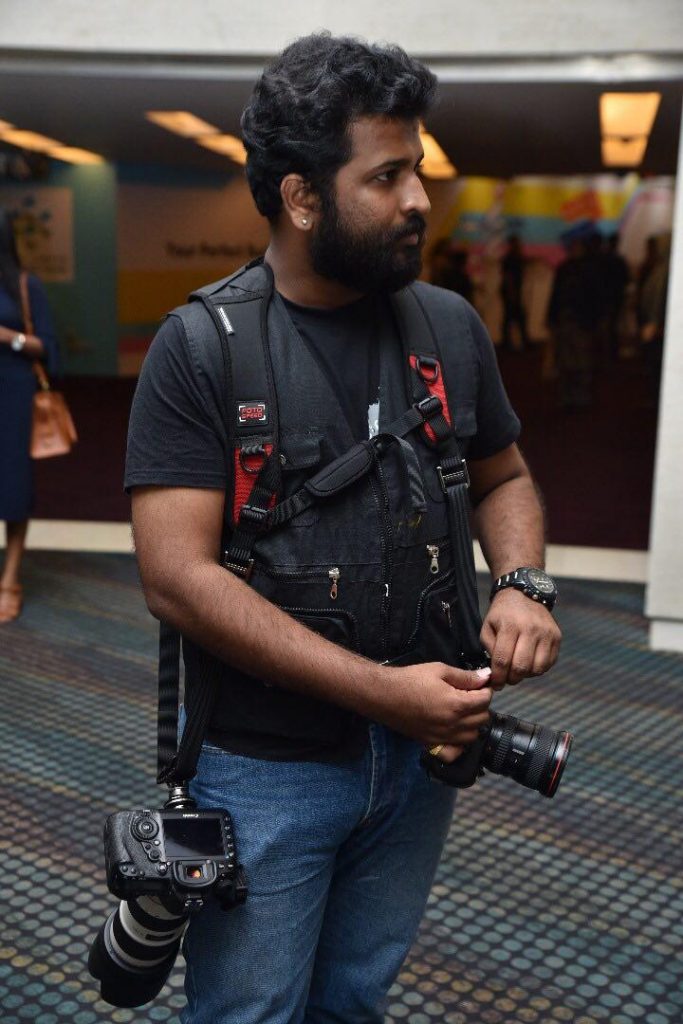 Photography itself began when I decided to help a friend photograph a wedding back in 2012. It was purely experimental at this point. Slowly, I started taking pictures of my clients, some of whom were celebrities.

I began shooting their portraits. For some of them, I would accompany them to concerts and do their hair backstage. There I would take shots of them, dolled up, with their permission, of course. I began posting my pictures online and received lots of positive feedback.

I decided that I needed to do this properly. So with my earnings from the wedding photography, I invested in a camera and lenses. And with practice, I became better.

But to be completely honest, I still have a lot to learn. It is really never ending. I love taking portraits, probably because of my love for hairstyling.

V: How did the Canon EOS Youth Ambassadorship come about?

B: Canon has an annual photo marathon that they conduct. It’s quite an interesting challenge, each photographer is given three themes to capture over a few hours. One of my clients worked in Canon, and he encouraged me to join. He said, “Not many Malaysian Indians are part of this, why don’t you take part? Don’t let go of this, and then cry that Indians don’t get anything here,” (laughs)

In 2017, Canon announced that they were coming up with their Canon Youth Ambassador programme. I submitted my application along with all my photos blindly, without knowing how they would judge the photos. At the end of the year, they announced that I was shortlisted. True to my client’s words, I was the only Malaysian Indian.

The following year, the 26 shortlisted candidates had to attend classes for 6 to 8 months. In every class, we were taught the different types of photography. 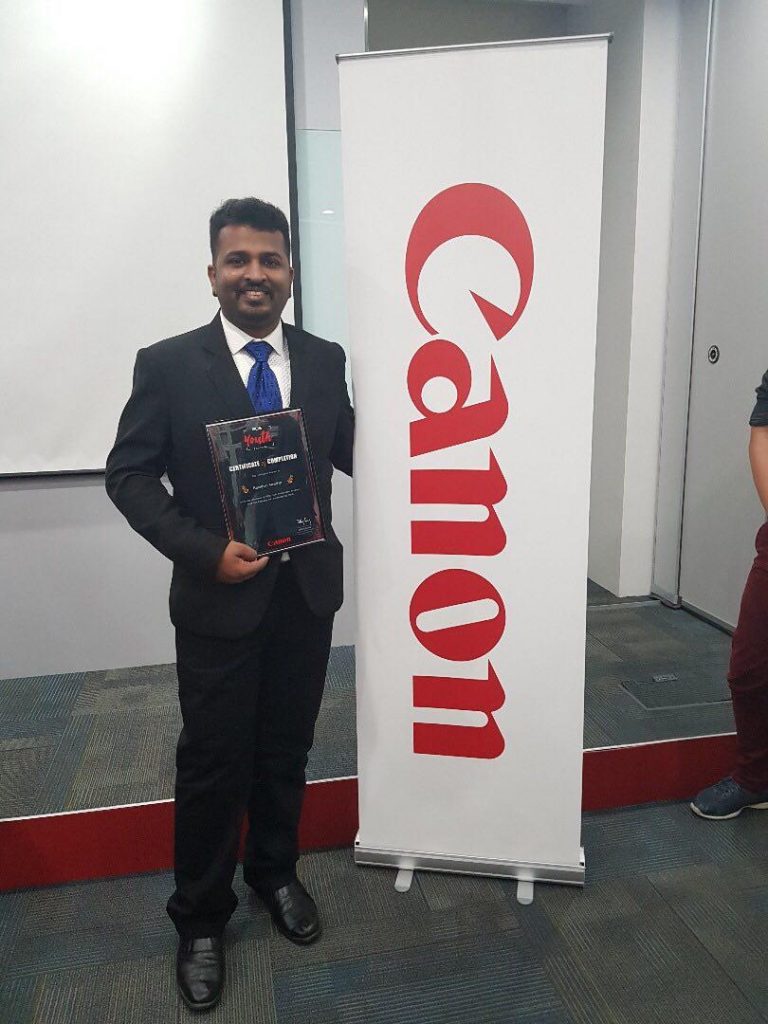 I had to close my salon to attend these classes, and I thought that it was a good investment. We were taught so many different types of photography – landscape, printing, journalism, street photography and many more. This was my chance to learn in detail from the experts at Canon and I made the most of it.

We had an evaluation, my entry was 3 portraits of Indian women in sarees. I was the only one with such vibrant colours, so my photos stood out. The organisers then spoke to us about our plans if we are chosen as the youth ambassador. Within a week they announced that 6 of us, including me had been selected.

V: A scroll through your social media betrays that you have built a network with some pretty prominent names from the Tamil film and music fraternity. How did you do this?

B: From late 2013 up until now, I’ve shot almost 95% of the Indian concerts in Malaysia. The thing is, when you shoot for artists and celebrities, they want to connect with you as they want to see your photos.

When they reach out to me, I talk to them about their work, their songs, and tell them how much I value it. I suppose it started there. Eventually, I got to meet their friends. I wasn’t interested in taking a selfie with them or anything like that, I just spoke to them about their work. Ultimately, they know me and respect me because of my genuine love for music.

I also travel to India every year. The first two weeks of my year is usually in India, as it is the musical month of Margazhi. I will attend katcheris daily and spend the whole day shooting. That’s also how I connected with some of the artists.

V: It’s no question that you’re a AR Rahman fan and you’ve studied most of his work in your own capacity. You’ve also photographed him, what was it like working with the Mozart of Madras?

B: I have almost 98% Rahman’s CDs. This includes his old jingles, of which I am just missing a few across the languages. And yes, I love to buy CDs. The experience of listening to a song on a CD and in MP3 format is totally different.

I reached out to him and he knows that I’m a collector. I used to shoot for his concerts and we would talk about the pictures I took. You know, people say he’s humble. But they often leave out that he is also very straightforward. He is crystal clear about what he wants. He would often explain to me about which angle of my pictures wasn’t the best and all of that. 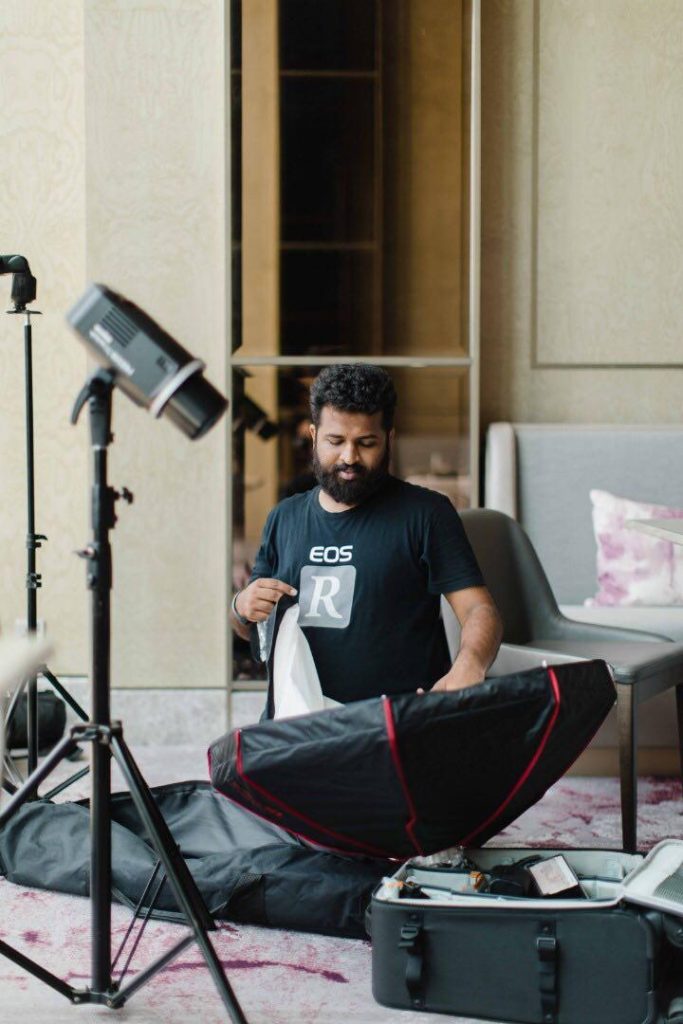 V: As you’ve photographed many Indian concerts in Malaysia, and as a fan of music, what are your thoughts on the industry?

B: Honestly, right now there are so many investors coming in, not knowing much about music itself. They are just looking to make money. There are very few Tamil concert organisers in Malaysia who actually understand music.

So many excellent singers and composers are not brought to Malaysia. Why? They’re just taking the safe route by bringing the popular ones, to fill their pockets.

It is sad, I sometimes think to myself, that the people in Malaysia cannot listen to the fantastic music at the katcheris and concerts I attend in India.

V: But is there even a market here for katcheris?

B: The market has to be created. When Starbucks first came to Malaysia, nobody knew about it, only after people began buying and tasting premium coffee did they realise what they were missing out on. The market exploded.

Until we bring down really talented singers and musicians, Tamil music fans will be seeing the same performers, the trendy, popular ones. A few superb singers in India who I feel deserve a chance to perform here are Pradeep Kumar, Vidyasagar and even Ramesh Vinayagam.

Ramesh Vinayagam has the ability to dissect and explain MS Viswanathan’s songs, down to the most minute technical bit. His knowledge in the field of music is simply superb. If he were to attend a concert here, people will know more about music.

Vidyasagar too, for that matter. For me, he is equal to Rahman. Sadly, nobody understands me when I say that, probably because Rahman’s fame knows no bounds. People like Sean Roldan and Ghibran are just brilliant. You need to listen to Ghibran’s songs from Uttama Villain, Vaagai Sooda Va and Adhe Kangal. Terrific.

If only talents like this were brought to Malaysia, people will be more aware about what good music is, instead of flocking to concerts just because the singer is cute.

V: How do you think we can change this?

B: Two things. Firstly the Malaysian government needs to get involved. People want to invest in a concert but they are afraid to bring musicians like Pradeep, fearing they won’t make money. With the government’s backing, these performers can be brought over, and a new market for Tamil music will be created.

Secondly, we need investors who understand music. Not only that, they also need to be willing to bring these people down and promote it in a proper channel. It’s about time Malaysians get to listen to good quality Tamil music. It is sad that rubbish music is expanding as people who are commercially famous are the only ones being appreciated. 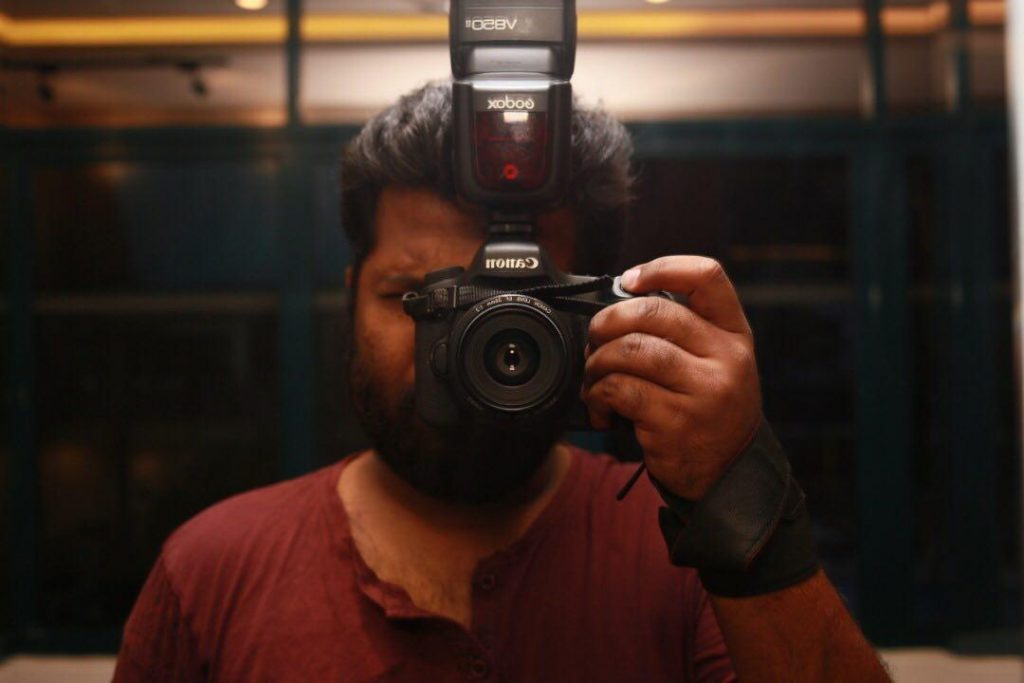 V: Although this is going to ruffle some feathers, we can see what your intention is behind saying this.

B: I know that I’m genuine in what I do. I’m not chasing fame or money and perhaps, that is why people like what I put out, be it hairstyling, photography or how I critique music.

When I conduct photography workshops, I often think, if there are 15 students who are better photographers than me, they will spread that knowledge to another 10 people in their circle. That way, the photography industry will grow to be better.

I want the future generation to learn and experience the good things I have. And I want to do my best to eliminate the rubbish that is out there now. Honestly, I’m not chasing fame, I’m only chasing my passions.