Did You Miss The Lunar Eclipse On November 19th?

Here are ancient myths surrounding the Lunar Eclipse that you may have probably heard over the years. 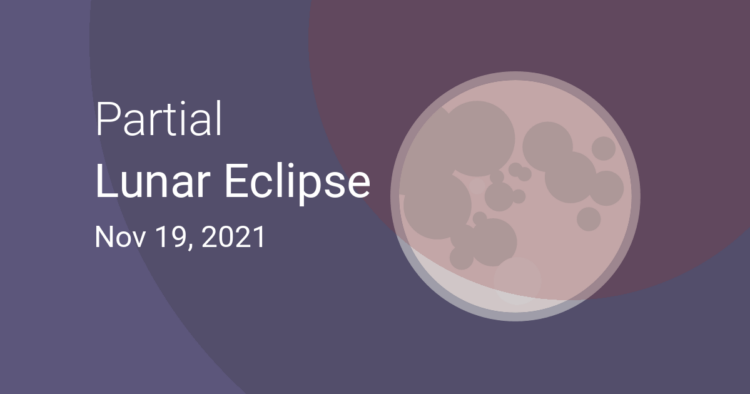 Nature and its sudden occurrences, particularly with planets and stars, have a significant impact on our lives according to Hinduism. In fact, Vedic astrology, which is based on the Vedas, India’s ancient system of knowledge, is based on the belief that the stars and planets have a powerful influence on our lives.

David Frawley writes in his book “The Astrology of the Seers” :

“What we call the planets are no more than points of light in a vast energy network, connected intricately by subtle lines of force, linking the entire solar system into a single organism. Though the planets appear like small points of light in the distance, their energy fields are present on Earth, and they are responsible for many of the formations of the Earth life and of our own bodies and minds.”

The eclipse, or grahanam, would be first on the list of natural occurrences that Hinduism deeply ponders. Consequently, on November 19th, there was a partial lunar eclipse, also known as a Penumbral Lunar Eclipse, which certain locations were able to witness in Malaysia.

A partial lunar eclipse occurs when the Earth moves between the Sun and the Full Moon, but they are not perfectly aligned. Only a portion of the Moon’s visible surface moves into the Earth’s shadow.

Were you able to see the eclipse on November 19th?

Partial lunar eclipses can be seen across the night-side of the Earth; however, because this type of eclipse is not as profound as other types of lunar eclipses, such as the Supermoon lunar eclipse, which appears larger than the normal occurrence, it is frequently misidentified as a regular Full Moon. As a result, some people may have missed it.

However, if you want to witness the cool occurrence (lunar eclipse) in the future, you don’t need any specialised equipment to see a partial lunar eclipse. All you need is the exact date and time of the next eclipse to be visible from your location.

Thanks to the weather forecast, all of the dates and times for the upcoming eclipse are just a click away. You may also require warm clothing and a chair to remain comfortable while watching the eclipse.

However, lunar eclipses are not a new phenomenon, especially in this era; most of us are familiar with eclipses as a result of our schooling. Regrettably, because there was no scientific knowledge of the eclipse in ancient times, people occasionally witnessed it and were perplexed by the event. People ascribed negative meanings to them because they were associated with darkness rather than light.

On that note, here are some myths that have been debunked that you should be aware of:

1. Watching the Lunar Eclipse with naked eyes can make you blind

2. Pregnant women should not go out during a Lunar Eclipse

Pregnant women are frequently advised to stay at home and avoid going out because lunar eclipses are thought to be harmful to the unborn child’s health and can result in deformity. However, all of this is a myth with no scientific backing.

3. Do not consume any food during a Lunar Eclipse

We’ve often heard our parents and grandparents tell us not to eat anything during the eclipses. Myths hold that eating and drinking during that time period can cause indigestion.

4. Immediately bathe after the Lunar Eclipse to wash away negativity

Another popular myth holds that bathing and washing hair immediately after a lunar eclipse will wash away the negative effects of the eclipse. However, if you haven’t bathed for the day, you should bathe whether or not there is an eclipse.

5. During the Lunar Eclipse, wounds take longer to heal

If someone is hurt or causes a wound during the eclipse, the effects are said to last a lifetime or take longer than usual. However, the recovery of any wound is dependent on the body cells, not eclipses.

So, did you get to see the lunar eclipse last Friday, and did you become a victim of the above myth by the elderly folks at home? Do tell us about your experience of this year’s lunar eclipse.