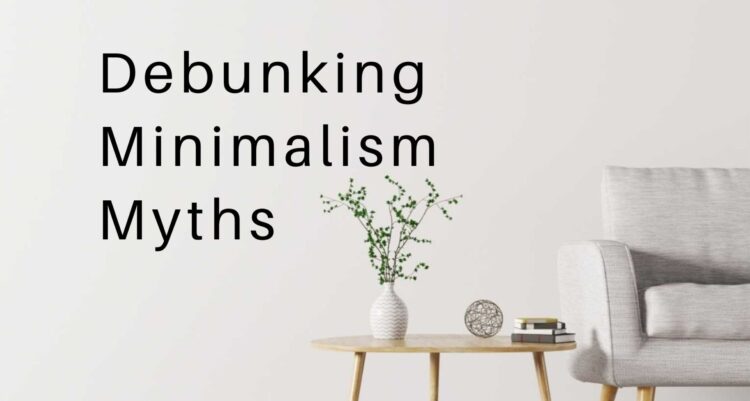 We saw last week how much of a destructive trait it is to be engulfed by material items to just clutter around with. That is the first step in contemplation before venturing into the world of minimalism. It is crucial to understand why minimalism is a better way to live by thinking on what we may be doing poorly.

This week is all about delving further into what minimalism truly is, and we’ll debunk some myths or misconceptions about it. Believe me, while I was learning this topic, I, too, had wrong perceptions about it since minimalism may be a tough concept to grasp all at once.

Minimalism means getting rid of all of your possessions.

Consider throwing away everything we own; we will not only discard the superfluous items, but even those that are essential. One explanation for minimalism is that it is the process of finding what is necessary in your life and having the courage to remove the rest. When you get rid of the unnecessary, you have more time and energy to devote to the things that are actually important in your life.  So, pick what is necessary and bring value to your life. After that, you might progressively toss or donate the rest of your belongings.

Minimalism means “minimalism” in every sense of the word.

Some individuals believe that minimalists live a lifestyle that is manifested not just in their possessions but also in their food, social circle, and so on. Even if this may be true, it is not necessary to implement minimalism in all aspects of your life. There are some minimalists who are not minimalists in terms of books and clothing. Some people have a large collection of clocks at home yet are still minimalists. It varies according to one’s interests and preferences. Even if you may be a complete minimalist, meaning “minimalism” in every sense, you can also select which area of your life you want to become a minimalist in.

Nope! It goes far deeper than physical things. What I meant by “you may choose to be a minimalist in a certain area of your life” was that you can be a minimalist in your diet, what you consume online, and how many friends you have. One of the simplest and most obvious applications is to material things. It might be an excellent approach to begin your path toward minimalism. However, in order to reap the full perks of minimalism, I strongly advise you to begin following some minimalist concepts in other areas of your life.

People may find minimalism uninteresting because they do not grasp what it truly entails. Again, it means to keep the things that offer value to your life and discard the rest. So, if social media, television, gaming, or having friends around would bring value to your life without negatively impacting it, why should you remove it? Also, if it is boring, why would anyone embrace minimalism?

Because of poverty, people choose minimalism.

Steve Jobs, a well-known minimalist, is certainly not lacking in this regard. Former Apple CEO John Sculley stated , I remember going into Steve’s house and he had almost no furniture in it. He just had a picture of Einstein, whom he admired greatly, and he had a Tiffany lamp and a chair and a bed.”  There are also some poor or middle-class folks who splurge on stuff. As a result, the distinction between rich and poor does not apply when deciding on a minimalist lifestyle. It is based on one’s own preferences rather than one’s financial situation.

There are actually a couple of more myths about minimalism but these are the common ones. There are plenty lying around on the internet and I recommend doing some research before jumping into conclusion about it. If minimalism is a beautiful understanding that less is more but please don’t misunderstand less with many layers of meanings.