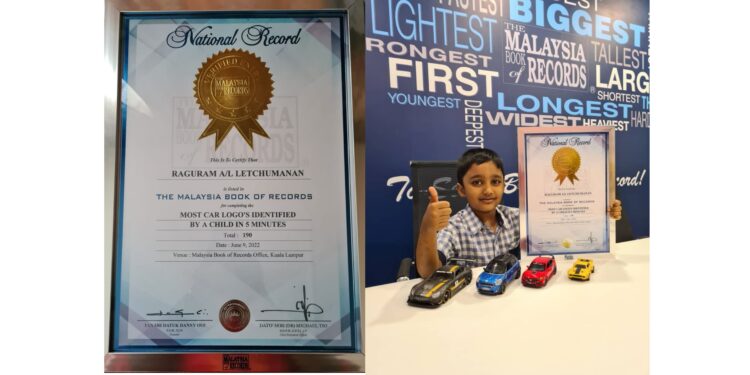 The majority of us are undoubtedly familiar with the logos and cars of Malaysia. Even though it seems straightforward, it is impossible for fully grown individuals to distinguish between the almost 190 different car logos.  A young boy of 6 could distinguish it in a matter of minutes?

Yes… Raguram Letchumanan, a six-year-old genius, set a world record for correctly identifying 190 car logos in five minutes, according to the Malaysia Book Of Records. ​​ 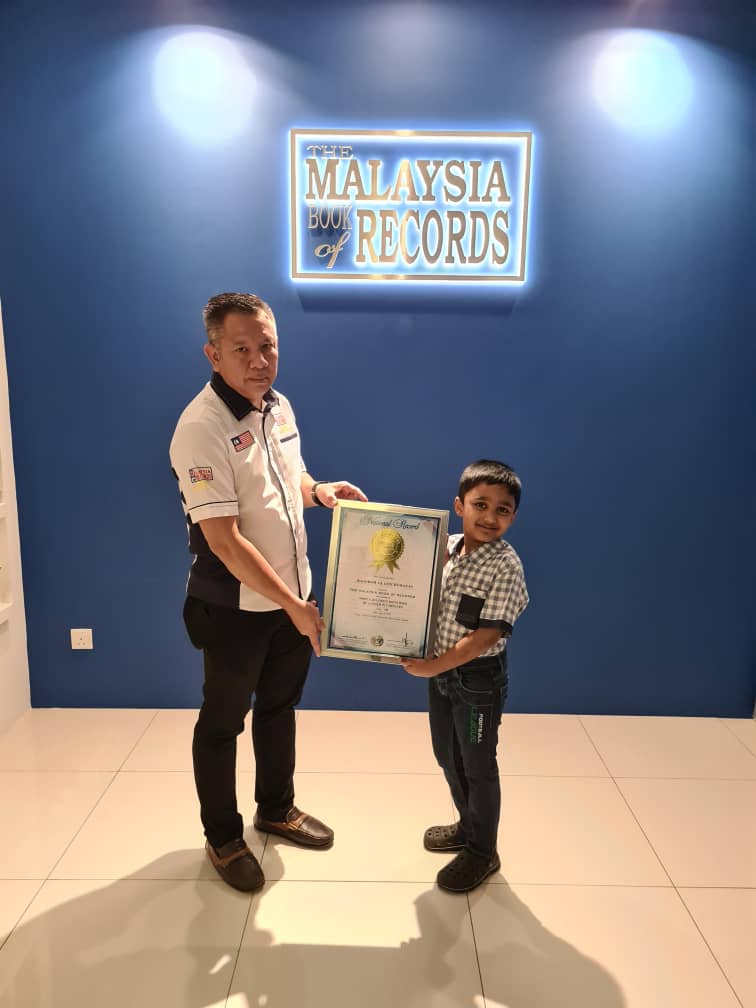 Varnam Malaysia had the pleasure to catch up with Raguram’s parents, L Letchumanan, an engineer, and PL Ranganayakidevi, a dentist. Realizing their son’s talent has been recognized and has gotten valuable recognition, the proud Johor native parents were ecstatic.

When Raguram was three years old, his maternal grandmother would spend plenty of time with him playing memory games. She taught some national flowers of other countries, for instance. Now, he knows at least 50 of them. At that point, their parents learned that Raguram has exceptionally sharp memory power to remember such things. 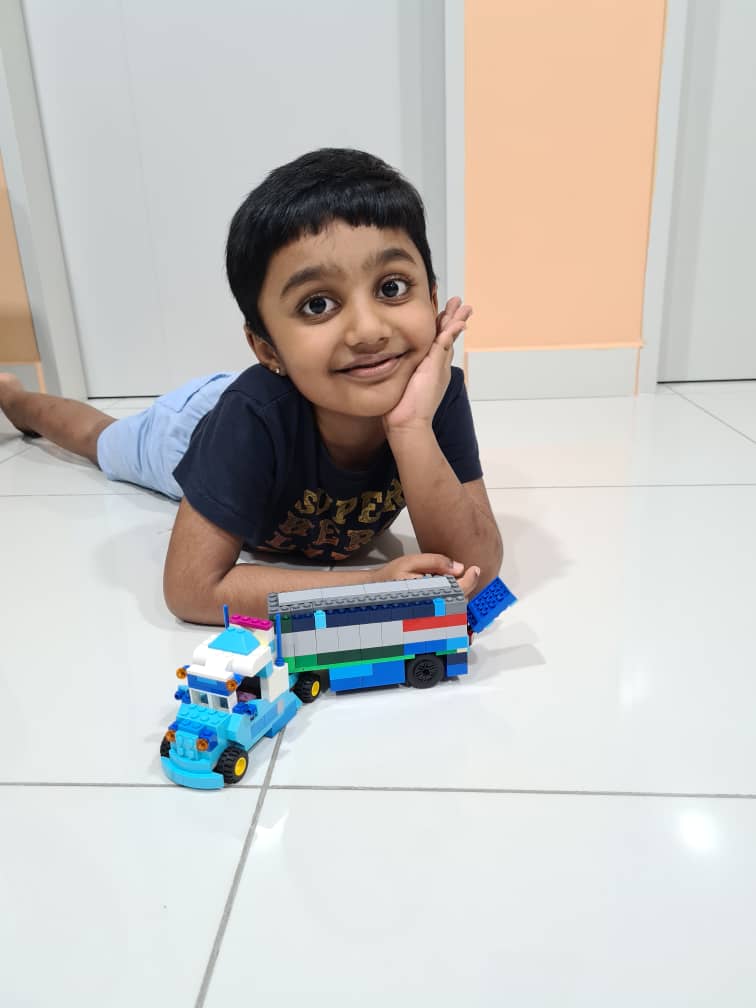 PL Ranganayakidevi, the boy’s mother, said that at first, he identified the Honda car logo, when he was gifted a toy car by his father’s friend.

“We make frequent trips from JB to KL as well as the other way around. He becomes enthusiastic as he watches the cars on the road as we travel. Additionally, it is crystal clear that his enthusiasm may have been passed down from his car-obsessed engineer father L. Letchumanan,” she added.

How did Raguraam’s fascination with car logos grow?

As Raguram’s memory power is mind-blowing he also observes the evolution of car logos as a whole. Since YouTube can now be accessed through television, this little boy usually searches for the shows or programs that pique his interest independently. “Of course, we keep an eye on him and offer him advice regarding the shows he watches. He usually finds himself watching automotive manufacturing plants in action. This is quite astonishing considering that a six-year-old often watches rhymes and cartoons, but Raguram is completely different” quoted Letchumanan,.

Raguram is also a punctilious person who notices fine details.

They only became aware of this when Raguram explained that the BMW 5 series and 7 series have various types of headlamps. Following their observation of his passion, this couple started adding the car logos to a PowerPoint display and frequently practiced with him. His photographic memory and obsession with cars has been gained him this recognition. 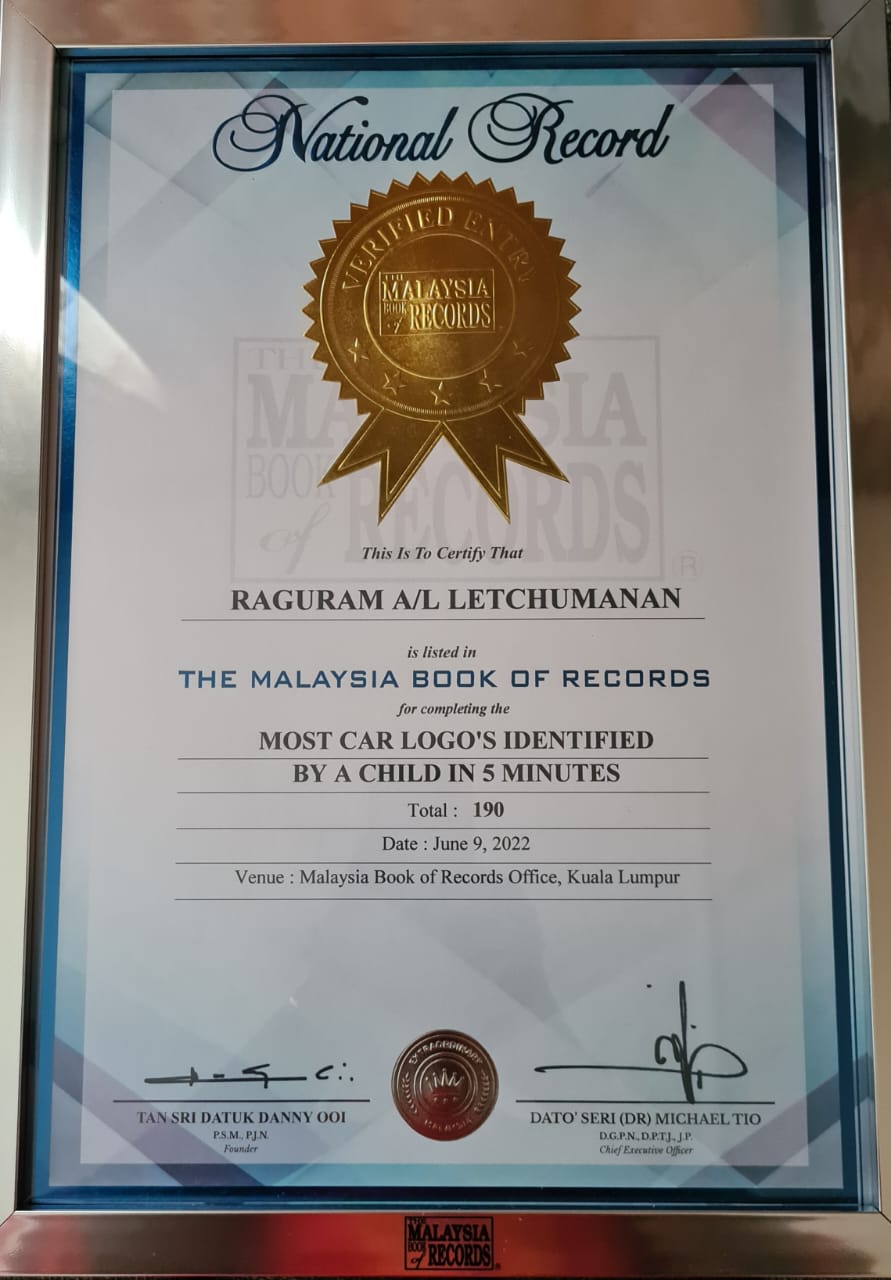 In addition to speaking Mandarin, Raguram, a student at a private international school; can identify numerous insects and animals. He has a thorough understanding of the names of the animals. This made the couple feel grateful to his grandmother for guiding him as a toddler.

Besides cars, Raguram also has a lot of interest in the historical NOKIA phones.

“About 20 old Nokia phones are in his collection. His grandparents and friends who are aware of his interest gave them to him. He would take the phone apart and examine the internal markings for specifications. He will inquire about the technical specifics afterward. His engineer father frequently provides answers to his queries,” said the boy’s mother. 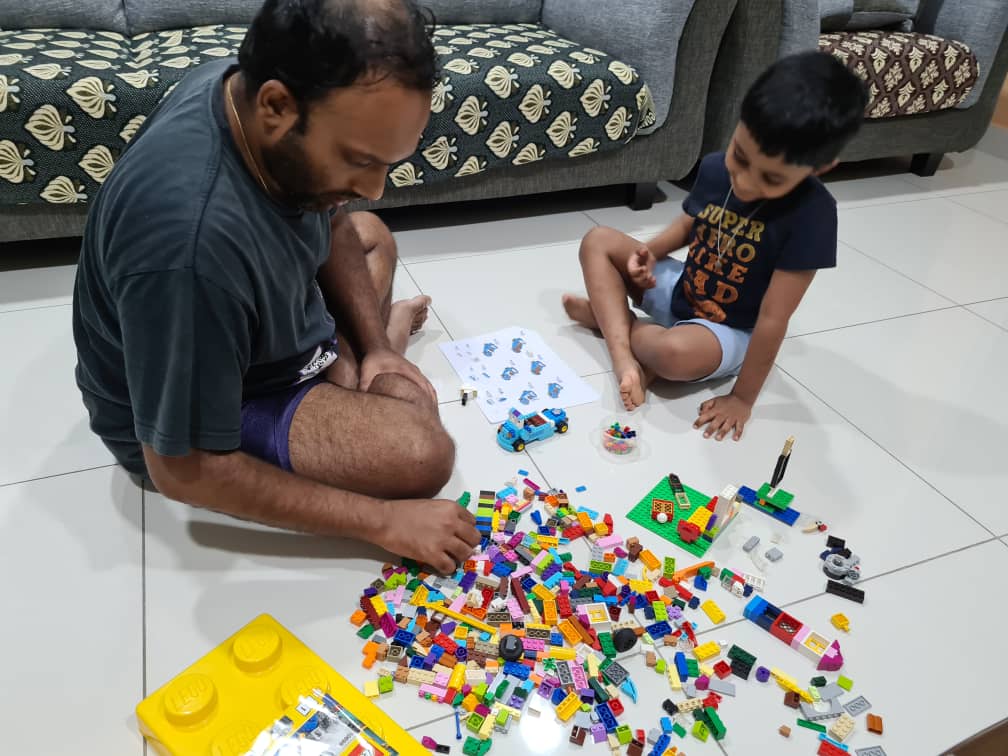 While asking about Raguraam’s plan, his parents stated that he wishes to become a successful scientist in the future and they will assist him in his respective field of interest.

“We shall support him with his interests all the way. We let him think for himself, pay attention to his ideas, and then direct and improve them. Perhaps this is what brought him to this point. And we will keep doing the same thing after this to fulfill his desire,” the couple stated divinely.

Congratulations and best wishes for your next adventure Lil one!