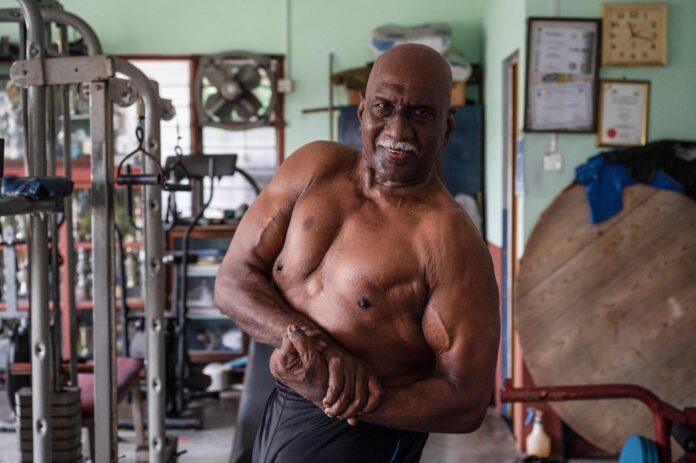 Get yourself ready to feel inspired!

Anyone who has tried to get buff – whether it is successful or unsuccessful – will tell you that it is not an easy journey.

It’s still a tough challenge for an introvert to strut confidently in front of everyone.

A. Arokiasamy, the 72-year-old Malaysian bodybuilder can stand tall and proud on his achievements throughout the years as the country’s most successful body builder.

“Bodybuilding is much like any other sport. To be successful, you must dedicate yourself 100% to your training, diet and mental approach.”

He won his first gold medal in a competition in his home state of Perak in 1968, and he went on to compete in Malaysia and internationally for several years after that.

His role model is actor and former Mr Universe Arnold Schwarzenegger, whom he always looks up to as an inspiration and role model. He began coaching aspiring bodybuilders in weightlifting and opened his own gym in his hometown of Teluk Intan, Hilir Perak district.

Arokiasamy’s gym, which is open to the public and charges the equivalent of one dollar a day, is a small building next to his home and run by someone from the local Indian community.

The father of seven children preserves his fitness by eating well in addition to working out daily. His gym is crammed with rusty weights and a number of other equipment, some of it scrap metal, and it’s still bustling with men pumping iron and receiving fitness advice from the seasoned bodybuilder.

Arokiasamy had a tumultuous childhood by dropping out of school at the age of 11 to work and support his impoverished family. He was trying to join a variety of games, including basketball, badminton, and football, but unfortunately none of the teams accepted him.

Hence, he decided to work as a firewood cutter to make ends meet before bulking up himself. Apart from that, he had a day job as a school gardener and now works as a security guard despite being a professional athlete.

Regardless of how big or little your health goals are, embracing a bodybuilding lifestyle will help you get closer to them, thus turning it into a reality. Arokiasamy has definitely inspired others in achieving their health and wellness goals.