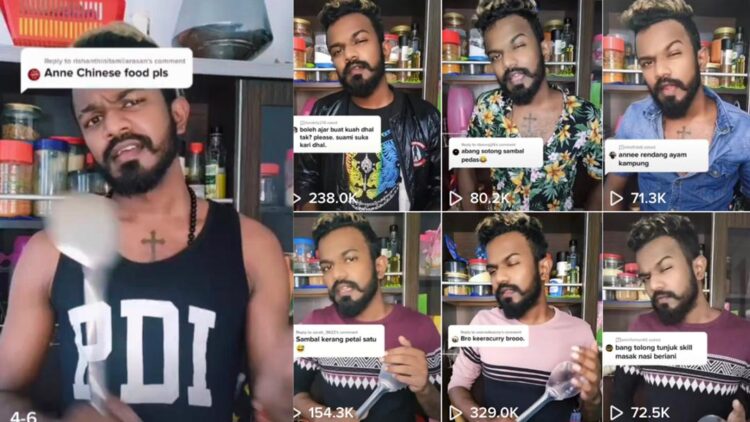 In these days of massive growth in social media usage, many people simply use the platform to post favourite images of themselves, which is often viewed as an aesthetic version of their gallery online.

But, aside from posting images, this platform is useful in a variety of ways. We see many users posting their talent, whether it’s singing or acting, and many have prospered as a result.

Similarly, another local TikToker has been using this platform to showcase his cooking skills and passion. Mathan Edward, like any other first-time user, began his journey in TikTok by doing the traditional lip-synching and opinionated videos.

However, at the beginning of May, he began posting more about his recipes, cooking and as a result, he gained even more followers.

Dried chilli chicken, Ayam Masak Lemak Cili Api, and Claypot Chicken Rice are among his authentic Malay and Chinese recipes. Mathan‘s Indian cuisine, such as Hyderabad Claypot Pudina Chicken, Kerala Crab Curry, and Mutton Curry, have also gained popularity among his followers. His recipes are not only simple, but they also look yummy.

His followers, on the other hand, are very supportive and frequently suggest or request recipes that he can show through his TikTok account. Some even suggest that he compete in cooking competitions because he has perfected a wide range of cuisines.

We live in a diverse country, and food is the major topic that brings all the races together. If you look at his comments section, you will notice that many followers from different backgrounds have joined together to be very supportive of his cooking journey.

Such talents should be acknowledged and valued more, and we wish this TikTok chef a bright future full of hope! Best wishes, Mathan Edward! For more on his mouth-watering recipes, do check out his TikTok account or his Youtube Channel.