Daniya Naidu: An Australian Degree-Holder Who Makes A Living Off The Dead

The mortuary business is a thriving one and she encourages more women participation. 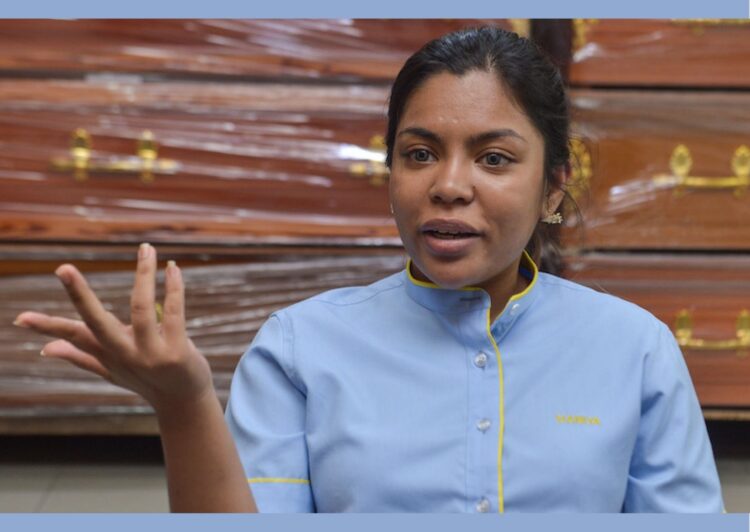 Talking about death is still pretty much considered a taboo subject, however it is part and parcel of life and whether we like it or not, one must discuss death, funerals and wills at some point in life.

While it may be a controversial subject, there is a growing demand for the undertaking and funeral industry and many have made a living off it.

It is not necessary for these tasks to be grim or depressing. Caring for the dead and those on the verge of death is a beautiful opportunity to live life to the fullest for many who are called to this field.

Let’s meet an amazing young lass who has ventured into a less conventional career path.

Seeing death up close may be discomforting for some, but for Daniya Naidu an undertaker, it’s just another day at work.

Daniya, an economics graduate from an Australian university, had no intention of following in her father, Parama Sarathy Naidu’s morbid footsteps.

Instead, Daniya reluctantly made the choice after the Covid-19 outbreak, leaving her jobless and unable to pursue her master’s degree programme in Australia as planned.

She had always seen herself as an “office woman” ascending the corporate ladder since she was a child.

“I passed my SPM in 2013, then proceeded to college and then overseas to the University of Queensland in Brisbane,” the 26-year-old said. Working there had always been a dream of mine. After becoming a statistician, I wanted to open a restaurant there as a side business.

Daniya, the eldest of four siblings, noted she has always been more intellectually oriented than her business-minded siblings, who joined their father’s company much earlier.

“So one day, my father told me to go to his office and work for him. He said I was simply idle sitting at home and that he wanted to divert me.” she continued.

“My father then offered me to work with him till I was able to find work. So I accepted his offer. Although there is some flexibility here, it is still work.

“For me, the pandemic changed everything, and I saw great opportunities here. Getting a job will be difficult in another two to three years, but death is inevitable, as it always is, and this pandemic shows no signs of abating, so I decided to stay in Malaysia and join my father,” Daniya explained.

“I became interested in this field and began working with embassies and foreigners,” she stated.

Daniya is taking the business seriously now and has come up with innovative plans and strategies to increase the value of the sector for women,  which she claims are still hesitant to join the industry which is growing and thriving.

“A lot of difficulties arose. My brother died during my first semester of university. I was anxious and disoriented. I found it difficult to maintain my CGPA. I concluded my studies in December 2019 and returned in February 2020. I was going to return for my graduation in June 2020, but the lockdown dashed my plans. To make matters worse, our house caught fire due to an electrical short circuit.

“I’ve seen a lot of scenarios when families will request whether we give female embalming services or if we have female personnel care for the deceased. Then it dawned on me: why am I incapable of doing it?

“Because there is a demand for this and many women do not want to work in this field, I began to learn from our workers here. “My other brother is a certified embalmer, so he taught us and I started learning,” Daniya, who is now pursuing her certification, explained.

She and her sister, Danija, seek to transform the industry’s perception among the general public and inspire more women to participate in the sector.

She noted that for those who aren’t used to getting out of their comfort zones, it’s important to remember that each body she cleans was once a living person.

Daniya Naidu says, “I see them as a family member, a person helping another person.”

When families requested female embalmers, the fluent Mandarin speaker felt it was difficult to say no.

“In comparison to Australia, which has many women in this profession,” she continued, “Malaysia is a rare example in this issue.”

Some family members refuse to bathe their loved ones and rely on them to do it for them. This is decent work that also provides dignity.

Daniya said “I want their final trip to be a dignified one. I haven’t received my embalmer’s certification yet, but I’m almost done with my training.”

“This isn’t a job to feel embarrassed of.” I’m a graduate of economics, and I’m not afraid to admit that I work cleaning and embalming the dead for a living. We are the industry’s largest exporter.” she expressed.

Daniya’s goal is to attract more females to this line. It is one of her most important goal because the funeral industry is a complex one that is both professional at the same time fulfilling, despite the stereotypes that some people have about the industry.