Can You Believe It’s Been 20 Years Since These Movies Released?

1999 saw some exceptional Tamil movies hit the screens. We recollect some of the classics of the year, two decades later. 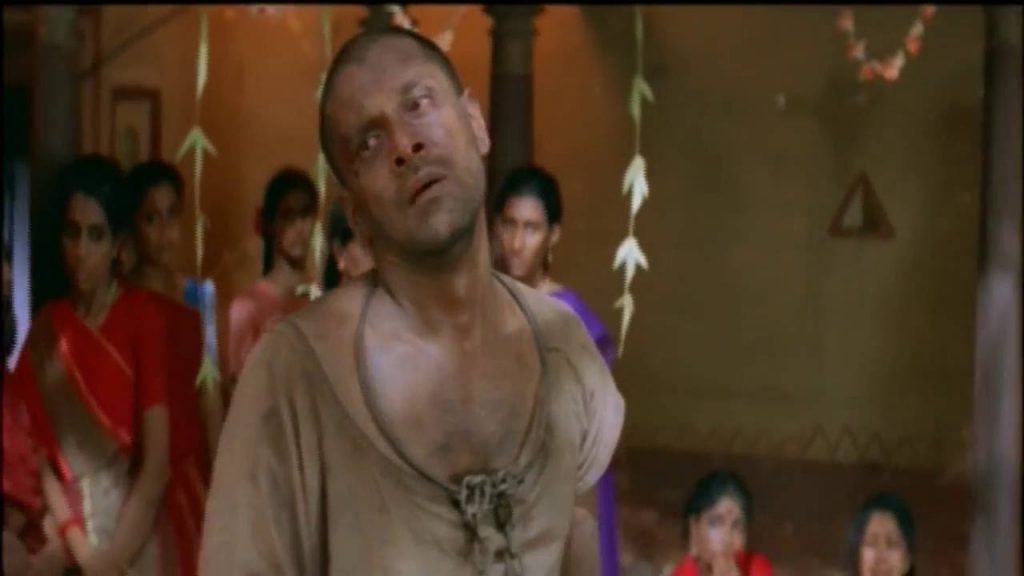 Vikram can probably classify his career into two. Before Sethu and After Sethu. Before Sethu, he was doing supporting roles and dubbing. He dubbed for Prabhu Deva in Kaadhalan, and Ajith in Amaravathi. There just weren’t good roles coming his way. He even turned down the role of Swarnamalya’s fiancée in Mani Ratnam’s Alaipayuthey.

And then, Sethu happened. Directed by Bala, Sethu had Vikram shave his head, lose 21 kg, and grow his nails long. And it paid off. While the film struggled to find a distributor due to the climax, Bala and Vikram persevered. Sethu finally released in 1999. Vikram’s performance won him accolades from Tamil film fans around the world. Sethu won the National Film Award for Best Feature Film in Tamil.  Ever since, Vikram has been unstoppable, thanks to his versatility that began with Sethu.

A film with a soundtrack as good at the movie itself, En Swasa Kaatre celebreates its twentieth anniversary this year. Written and directed by KS Ravi, the Arvind Swamy-Isha Koppikar combo has not seen another romance fueled by such lilting music up until the days of OK Kanmani, perhaps. Prakash Raj’s performance in this film is unforgettable.

Interestingly, this film was one of Rahman’s most loved albums of the late 90s, with tracks like ‘Jumbalakka’, ‘Kadhal Niagara’, ‘Chinna Chinna Mazhai Thuligal’, ‘Thirakkadha’ and the title theme, ‘En Swasa Kaatre’, all composed by Isai Puyal, AR Rahman. 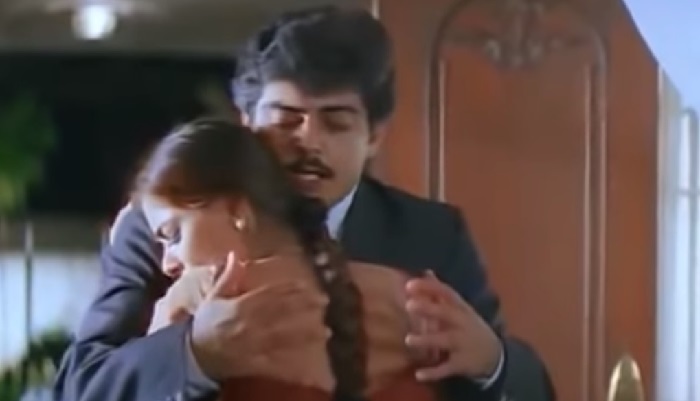 Many might remember Vaali for Ajith’s dual role, for Jyothika’s introduction to Tamil films, or for the steamy scenes involving Simran. The same people would be turned off to know that Vaali  was SJ Suryah’s directional debut.

A pair of twin brothers, one who’s deaf and mute, another who lands a bombshell of a wife. Do you really need SJ Suryah to tell you what happens next in a Tamil movie?

Vaali received an A certification, indicating that it is available for public exhibition, but with restriction to adults.This psychological thriller not only had excellent acting, but also an engaging screenplay with bloody realistic dialogue. Vaali went on to win multiple awards for Best Actor and Best Actress in the Filmfare Awards South that year. 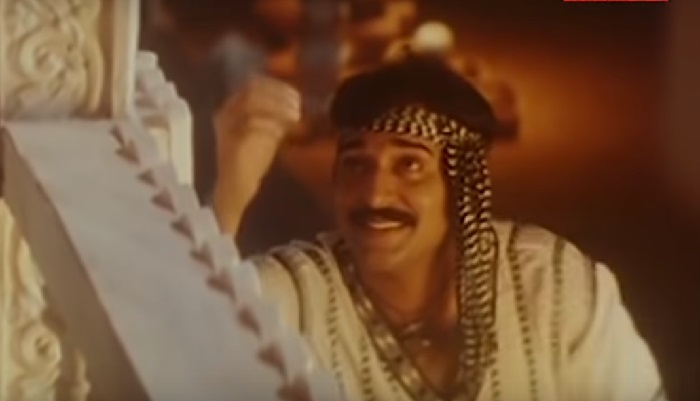 A fantastic tale of friction between two forms of dance is the crux of Sangamam, and that’s what makes it so damn good. An ironical sub plot of the story is the progeny of two opposing dance factions falling helpless in love, that results in a climax with music and dance like never seen before. Sangamam was eons ahead of its time, and the performance of lead actors Rahman and Vindhiya did the story justice. 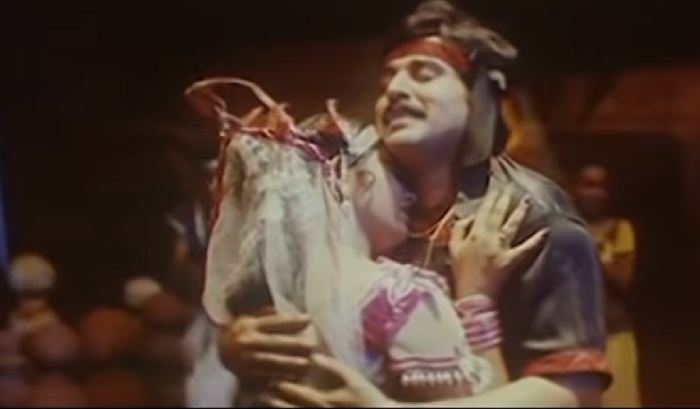 Such a musically contingent film, Sangamam had AR Rahman compose the lovely tunes that serenaded us like ‘Varaha Nadhikarai’, ‘Sowkiyama Kannae’, ‘Margazhi Thingal Allava’, and the one that we can never get out of our heads no matter how much we try, ‘Aalaala Kanda’ sung by Hariharan.

Side note: Who knew that Rahman (the actor) could dance so well?

Ah, the good ol times when Vijay wasn’t championing a social cause with every movie. 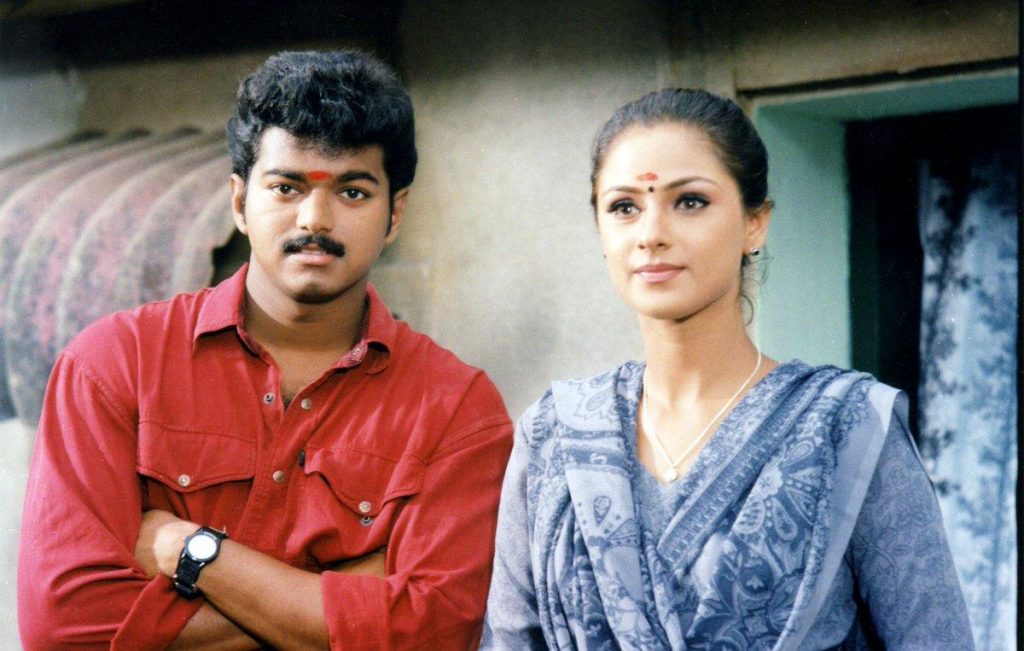 This movie should just be renamed to Innisai Paadi Varum, the theme song of the film. Yes, we know you can hear the intro to the song right now, that sequence of sounds caused by a range of oddly shaped bells, thanks to SA Rajkumar.

But the film itself is more than that song. Rukku (Simran) thinks Kutty (Vijay) is a neighbourhood rowdy, but she doesn’t know that he sings like an angel. When Kutty inadvertently causes Rukku to lose her eyesight completely in a logic defying chemistry lab accident, he decides to atone for his sins by helping her every step of the way, without her knowing that he made her blind. 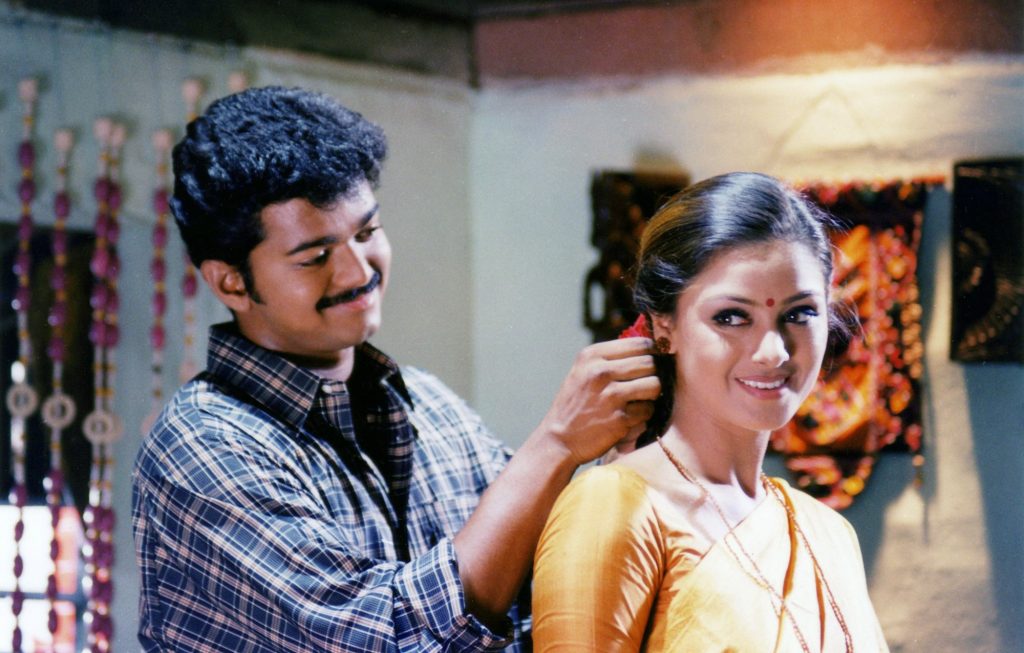 What is interesting about Thullatha Manamum Thullum is the respect that Kutty and Rukku show each other that eventually blossoms into love. A scene that many will remember is when Rukku’s bra strap is showing, and Kutty struggles to articulate it to her, before telling her in a very decent way. And mind you, this was 20 years ago.

Of course, Rukku eventually regains complete use of her eyes but loses Kutty for many years. How does she finally locate and identify Kutty? Innisai paadivarum ilam kaatruku uruvam illai… 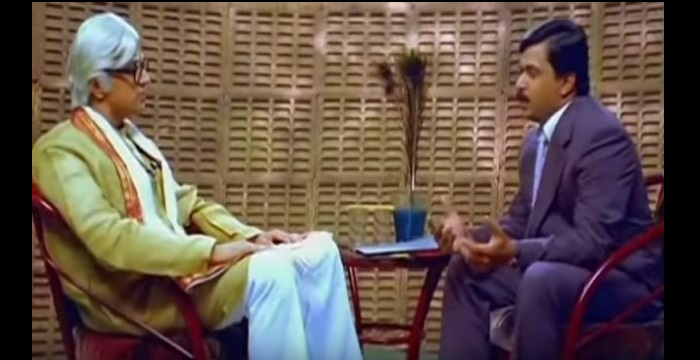 Uppu karuvaadu, oora vecha sooru aside, Mudhalvan was and is one of the best Tamil movies ever made. The Shankar directorial with Arjun and Manisha Koirala in the lead shed light on the blatant corruption that devours the Indian political strata from within.

Mudhalvan was also possibly Raghuvaran’s magnum opus. How Pughazhendhi cleans up Tamil Nadu starting with the public administration, and ending his day with the arrest of the antagonist is what makes Mudhalvan so damn brilliant. 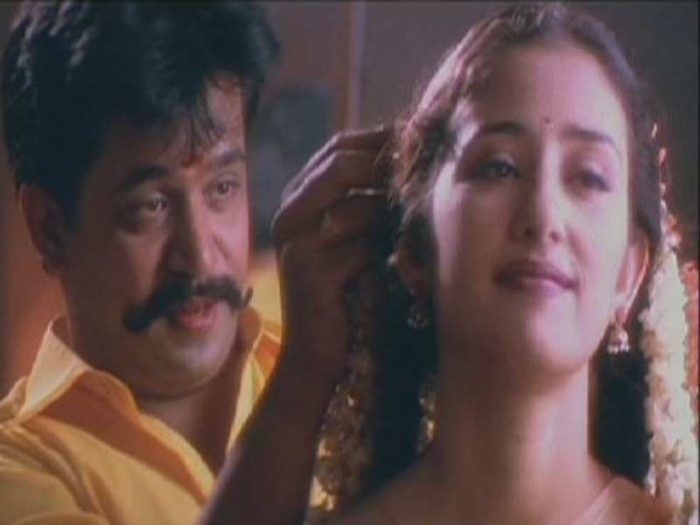 AR Rahman’s musical composition for Mudhalvan deserves a post of its own. More than the tunes like Shakalaka Baby and Kurukku Chiruththavale, the background score of the film itself was what buoyed the viewer into the era of unscripted television interviews and what it could result in.

Yes, it is incredibly misogynistic. Yes, he mansplains the hell out of the movie. Yes, he literally tells women how to be women. But still. This Rajinikanth-KS Ravikumar masterpiece is one that will live on in the hearts of Tamil movie fans for another century, simply because of Rajinikanth’s magnificence. The ‘samantham’ marriage ritual at the village Murugan temple. The shy, timid Vasundhara. His father dying at the pillar of his house after being kicked out. Neelambari’s vehemence for Padaiyappa. Saving all the women in red from the same bull that is colourblind. The granite hill that he didn’t know he had. The eventual millionaire he became. From dilapidated shack to a resplendent mansion within the span of Vetrikodi Kattu. Neelambari watching the same video for 16 years in a dark room. Abbas, looking at Rajinikanth in awe saying, “What a man!”

Who needs logic when you have the Superstar AND Neelambari? Padaiyappa is a cult classic, and for this Rajinikanth fan, will always be the best thing that came out of the year 1999.