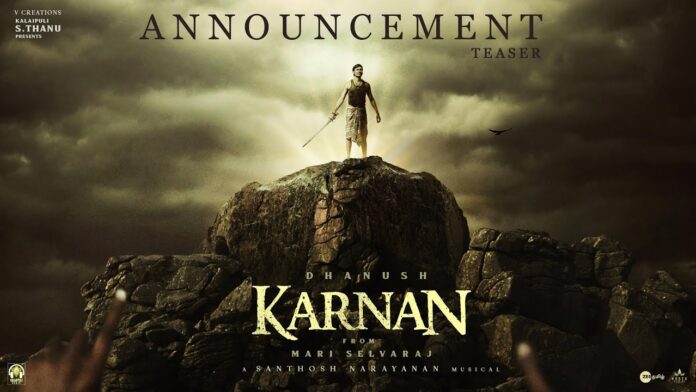 Karnan would be Dhanush’s new release for this year along with his other projects; Atrangi Re, Jagame Tantram and more. This news was anounced offcially via their twitter handles while also releasing the teaser of Karnan.

The shooting of the film was completed by Dhanush and the entire Karnan team in December 2020. Kalaipuli S Thanu is producing the film.

Dhanush climbs a hilltop in the teaser and strikes with a big sword in his hand. The entire teaser was set in black and white format.

This could be an obvious sign that this movie is an old rural drama tale.

The makers of Karnan also released a brand new poster of Dhanush standing on a hilltop with a sword in his hand similar to the teaser. Additionally, it also shows hundreds of people looking at Dhanush standing below.

The composer will be Santhosh Narayan and Karnan features Gauri Kishan of 96 fame, and the popular Mollywood star Lal is also part of the upcoming Kollywood film.

The whole team of Karnan is very much excited to bring this Kollywood rural drama to the audience and so are we!