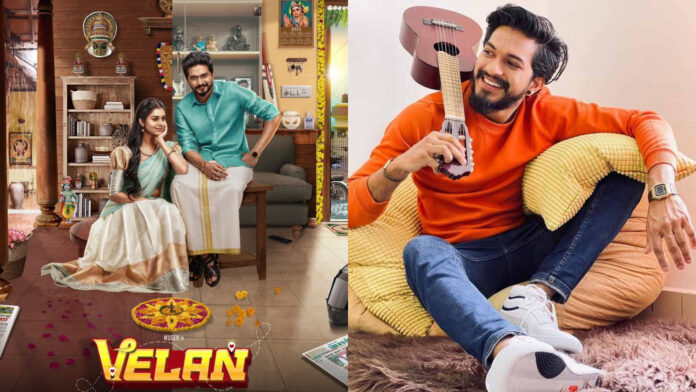 Mugen Rao thanks Dulquer Salmaan for launching his upcoming movie, Velan’s first look which depicts Tamil and Malayalam culture in the backdrop.

Director Kavin Moorthy shared that Velan would feature Mugen in two looks, one as a high school pupil and the other as a college-student, in an exclusive chat with Cinema Express.

Speaking of the film, It’s mainly a Tamil and a Malayalian story. It also touched the emotional relationship of a father and son between the character of Mugen and his dad.

The director adds that this story will also illustrate a 50 year relationship between Mugen’s family and the antagonist (played by Hareesh Peradi).

Cinema Express reported earlier that Soori was going to play Mamookka Dineshan, a Malayali named in the movie. Fans of the Bigg Boss fame would have witnessed both in a short clip that Soori posted on his Instagram handle.

Velan’s music director is Gopi Sundar, its editing is undertaken by Sarath and Gopi Jagadeeswaran’s cinematography.

The film is being dubbed in its last phase, with the directors trying to make a theatre release during the first week of June.