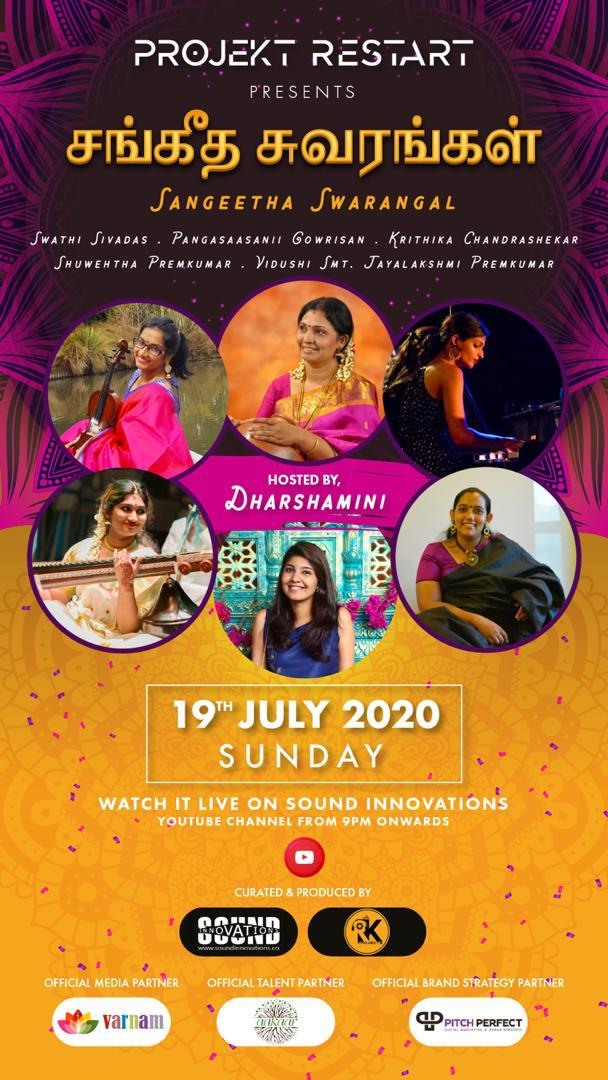 Carnatic music lovers out there… this is for you! After the massive success of 4 episodes of e-concert, ProjeKt Restart is back again, with a classical repertoire this week on Sunday, 19th July 2020 at 9 pm, closing the curtains for their first season. ProjeKt Restart started off with the notion to bring the music field alive during the Movement Control Order (MCO) by providing the platform for local independent bands and musicians to showcase their talent.

Their biggest belief and driving force to kick-start this project was that music had the power to help one get through any hurdle in life. The first virtual concert was aired online via You tube and Facebook live  on 24th of May 2020 and it instantly became a super success when it garnered over 3000 viewers!

This concept is the brainchild of RK Projects supported by Sound Innovations. The whole series of the first season consisted of 2 mediums, Tamil and English. The team has decided to end the first season with a bang by showcasing an all female musicians for the first time ever! 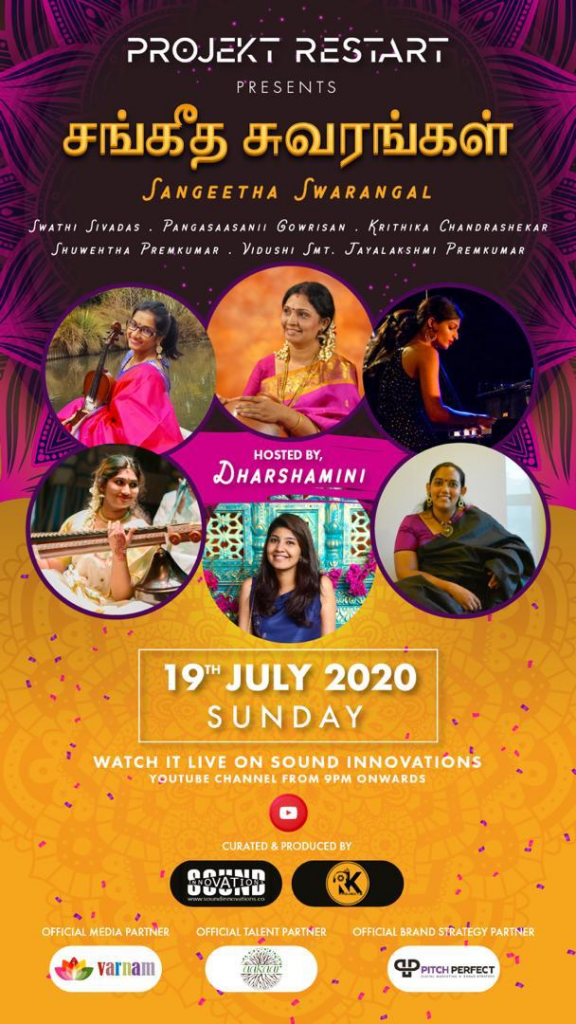 The main lead showcases a mother-daughter duo that has been in the Carnatic music field for almost 25 years. Vidushi Srimathi Jayalakshmi Premkumar, one of the few female ghatam players in the world, and the first in Malaysia, has her own music school with over 150 students. Her daughter Shuwehtha Premkumar, is a music school graduate. She has received many awards and is well recognised for her talent in playing the veena.

The talented duo have shared their music legacy in many languages such as Malay, English, and Mandarin. They have played many songs using the veena and ghatam. Shuwehtha emerged as a gold medalist in a Carnatic competition and has also been awarded the Youth Excellence by Astro. She was also honoured as Yaalisai Nayagi (யாழிசை நாயகி). Yaal refers to a stringed Tamil musical instrument, Isai refers to music and Nayagi means lady. Shuwehtha was also titled as Veenathari (வீணாதாரி) by Chakrapati from Andhra Pradesh.

The other performers featured are Swathi Sivadas, pianist, and Pangasaasanii Gowrisan, violinist, both music tutors at the Temple of Fine Arts Kuala Lumpur. They have been in the music field from a very young age. Both instrumentalists come from a family with strong musical influence.

Krithika Chandrashekar, the nightingale of this team, is an All India Radio artiste. The vocalist has her own group called The Samo’ Sounds which features Aanantha Rajaram, Priyanka Raman, Kumar Karthigesu, Selvendrah Krishnan and Kirubarasan Alexander. The women are very influential musicians, ready to bring you on a journey of Carnatic Music. This all female band is known as Sangeetha Swarangal. They have collaborated  with Aaakar multiple times, performing for most of their major concerts. Aakaar played a huge role in forming the team and is the main talent partner for this episode of ProjeKt Restart.

Melophiles, block your date and time and be ready to be wowed by the mellifluous tunes of Carnatic Music with a mix of Carnatic cinema songs this Sunday, 19th July 2020 with ProjeKt Restart.