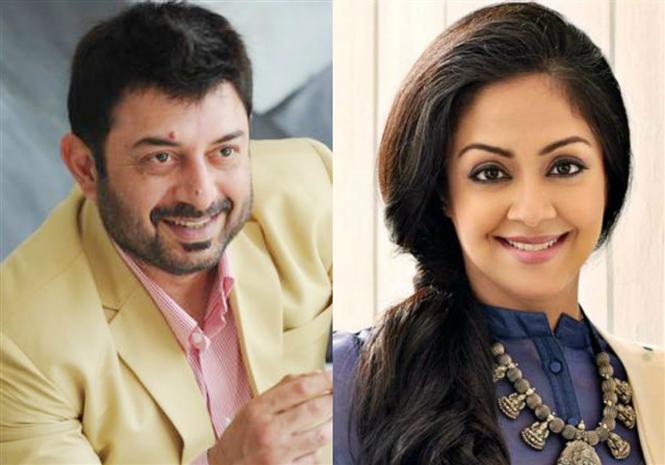 Everyone is looking forward to Mani Ratnam’s multi-starrer venture, Chekka Chivantha Vaanam. The film stars Simbu, Vijay Sethupathi, Arun Vijay (the villain from Yennai Arindhaal), Arvind Swami, Jyothika, Prakash Raj and many many more. Over the past couple of days, the film’s marketing team has been introducing some of its characters through first-look posters.

Check out the photo of Jyothika and Arvind Swami below:

Most of the details concerning the film are still kept under wraps. As of right now, all we know is that the film is reportedly a crime-thriller. But even in that regard, there seem to be conflicting reports — it’s billed as a drama on IMDb. That said, from the photo above, we can deduce that Jyothika and Arvind Swami will be playing partners in the movie, most likely husband and wife.

Chekka Chivantha Vaanam is helmed by industry veteran Mani Ratnam (Thalapathi, Nayakan) and will be lensed by industry veteran Santosh Sivan, who has worked on films like Thuppakki and Kuch Kuch Hota Hai. This cinematographer previously collaborated with Mani Ratnam on Raavan and Raavanan. A.R. Rahman will be the film’s musical composer. The film is set to hit the big screens on September 28 2018.