Digital artist Rames Harikrishnasamy has come under fire for an insensitive post on Black Lives Matter.

In an Instagram post depicting a statue of the Goddess Durga, a lion and a black dog, Rames tells a story about a lion, the pet of Goddess Durga who stumbles upon a black dog who was lamenting its blackness.

#conceptart: BLACK LIVES MATTERS ✊🏼✊🏽✊🏾✊🏿🖤 . . Full story: Maa Durga brought Her vehicle the Lion to one of Her temple in Tamil Nadu. Once arrived, She looked at the lion and said.. . . “Dear, this pooja will require me to be here for quite some time. Why don’t you go out and play instead of waiting for me here. I’ll call you once it’s done ☺️” . . “Oh! Ok Maa. That sounds good. I’ve never been to this temple before. Looks like I can use this time too look around 😄” said the lion before heading out for a sightseeing. . . While he was strolling at the back of the temple, he could hear a very sad voice. As if someone was crying. He followed the voice and was surprised to see a small black dog staring at Durga Maa statue. . . “Why did You made me black Maa?!😞. Why?? Everyone just hates me because I am black! But I didn’t do anything 😭. I don’t even have any friends because of my look. Every time I walk around the neighbourhood, people chased me away because for them, I bring bad luck 😣. Just take my life away Maa. Please. I can’t take it anymore 😞” said the sad little dog. . . The lion who was listening from the bushes was crying and lost for words 😢. He took sometime to calm himself down and said.. . . “Hi. I heard everything. I felt sorry for what had happened to you 😥🙏🏽✨. We should blame the society for judging people based on their colours. I understand that I will never understand. However I stand with you ☹️. We can do this together 🙌🏽. Can you accept me as your friend?” said the lion. . . The dog was so touched with what the lion just said 😣. And ever since then, the lion would bring him every where he go and introduce him to his circle of friends. Now everyone likes the black dog. Liking him not based on COLOUR but the KIND HEART he has ❤️. The End ✨. . . I am very sure you all know what’s going on in #America right now. To change all this, it’s starts from YOURSELF. Then, the SOCIETY will follow 🙏🏽. I really hope things will get better in the US very soon ✨🇺🇸 . #georgefloyd #blacklivesmatter #photoshop #blackouttuesday

Rames ends his post by correlating this story with the Black Lives Matter movement. It is an international human rights movement, originating in the African-American community in the United States of America, that campaigns against violence and systemic racism towards black people.

“Why did You made me black Maa?! Why?? Everyone just hates me because I am black! But I didn’t do anything. I don’t even have any friends because of my look. Every time I walk around the neighbourhood, people chased me away”

People from around the world have taken to his comments to express their dissatisfaction with the distasteful comparison, including African Americans themselves. 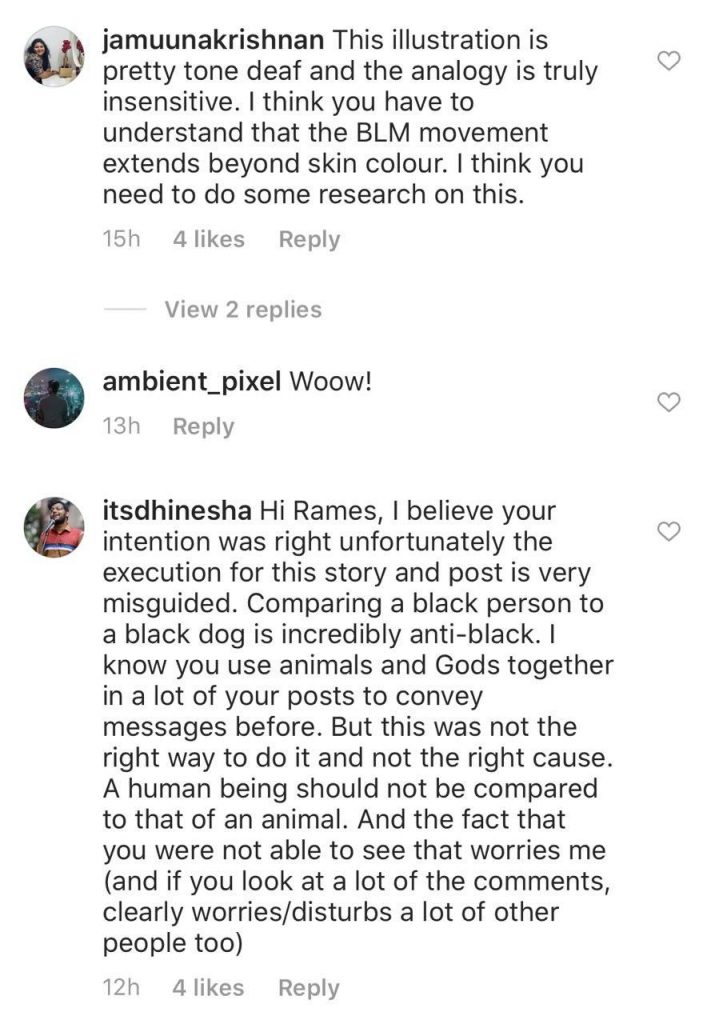 Rames, however, appears unfettered by these messages and chalks it up to a difference in opinion, reinforcing that he has no control over how people perceive his work.

The sheer number of positive comments on the post are part a worrying trend that most of these individuals have no comprehension of the term Black Lives Matter.

Many of those calling Rames out for this post have reinforced that they understand his intention was to mean no harm, but they are concerned that his insensitivity in keeping the post up is very inappropriate.

The Varnam team stands with those who have called Rames out. Equating the laments of a black dog to the Black Lives Matter movement, one birthed to decimate systemic racial oppression of African Americans isn’t just wrong, it is downright insulting.