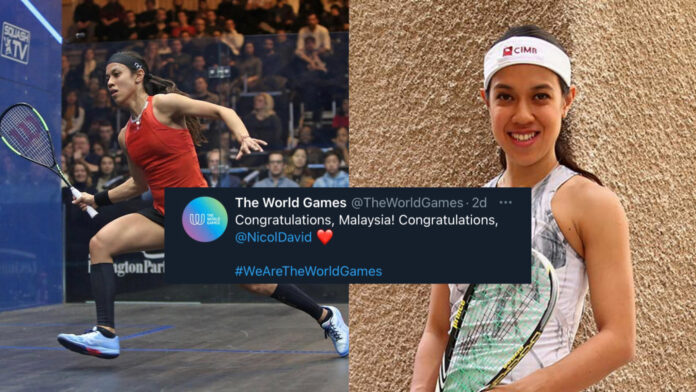 Datuk Nicol David, who had an extraordinary nine-year stretch as number one in the world, outclassed 23 other athletes from across all editions of the 40-year history of the World Games in a poll, representing their respective sports.

Nicol David 🇲🇾 is The World Games Greatest Athlete of All Time! With a huge number of votes, 318,943 she was voted as the greatest of the 24 sports legends that started the race in January. All in all, 1,204,637 votes were cast in the poll!#WeAreTheWorldGames @WorldSquash pic.twitter.com/po08clPfkT

In an online poll, our Squash queen was given the title of “Greatest Athlete of All Time” by the International Sporting Association, where she won a total of 318,943 votes, ahead of tug-of-war champion Jame Kehoe and powerlifter Larysa Soloviova by over 200,000 votes.

After the first edition took place in Santa Clara, California in 1981, the Greatest Athlete of All Time poll was held in conjunction with the 40th anniversary of The World Games.

Prior to her retirement in 2019, Nicol who is of Indian and Chinese descent had dominated the international squash scene, despite holding the world number one ranking for a record-breaking 108 months in a row.

To top it all off, her legacy has once again shone brightly in the eyes of the world.

In order to congratulate Nicol, Malaysians have since taken to social media platforms.

Congratulations to @NicolDavid for being voted the greatest athlete of all time! Proud of you as a Malaysian! It is my honour to be playing in the same time as you. Different racquet, same home, same flag. Nicole, truly the GOAT! pic.twitter.com/0kQPQIi2R6

You are truly the Greatest of All Time @NicolDavid!
Congratulations G.O.A.T. , From 🐔. pic.twitter.com/wTHjiuRoy3

Malaysia’s very own #SquashQueen received the #GreatestAthleteofAllTime title and we are LIVING FOR IT! 👏 A big hearty congratulations to Dato' @NicolDavid for keeping the Malaysian flag flying high and being an inspo to us all💛🇲🇾#DigiLetsInspire pic.twitter.com/tHxFb8WF5e

According to Borneo Post online, Nicol said when commenting on her win:

It came as a surprise to see me amongst these other top athletes and I’m grateful for this…hopefully it can elevate attention for the future of squash, and it’s a proud moment to represent my country and Asia.

The winners will receive an Athlete of the Year trophy and a branded gift from the official sponsor.

Datuk Nicol, you serve as an inspiration and role model to us all. Congratulations on this prestigious title!