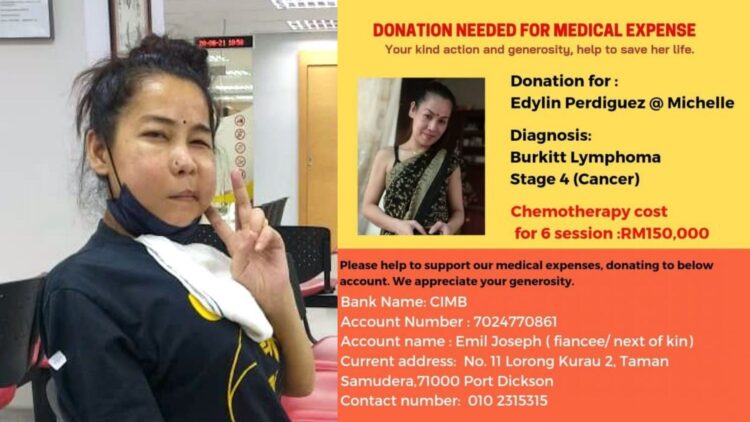 Apart from the horrifying pandemic, it’s been a difficult time for a foreigner who has lived in Malaysia for the past 11 years.

Edilyn Perdiguez, also known as Michelle to her friends and family, is a Filipina who worked as a scuba diving assistant and technician before becoming a caregiver to the elderly.

When the Movement Control Order (MCO) was announced last year, Michelle was out of a job and decided to move to Port Dickson from Kuala Lumpur to be with her fiancé, Emil Joseph, and they both started a home-based food delivery business.

Unexpectedly, Michelle discovered a lump on her right breast the size of a 10 cent coin in June, 2021. Though not alarmed at first, she decided to get it checked and was initially prescribed antibiotics.

This lump grew rapidly and she had to do some further tests to check on the lump. As she was a foreigner, making an appointment at a government hospital was nearly impossible but even then they were lucky to get an appointment, it was dated 3 months later.

But since her lump was growing very quickly, her situation did not grant her to wait any longer.

After getting her an appointment at a Chinese maternity hospital in Seremban, they discovered that the lump was in fact cancerous.

When such unexpected and unavoidable issues surface in our life, the first thought to strike our mind is money.

“I got on Facebook and started joining cancer support groups and asked around if anyone could help. Thankfully, we were able to get an appointment at Beacon Hospital in Petaling Jaya the very next day,”

The doctor there carried out a PET scan and more advanced lab tests.

“We found out she has stage-4 Burkitt’s lymphoma, which is a form of non-Hodgkin’s lymphoma,”

This type of lymphoma is rare and usually starts at the neck. In Michelle’s case though, it was too late as it had already spread to her breast, starting with the right and slowly to the left.

As the chemotherapy cost was very high in that hospital, they had to find some other hospital but once again as she was a foreigner, National Cancer Institute did not schedule an appointment for her due to the MCO.

Meanwhile, her condition was worsening making the left side of her face swell up. She could barely speak for three weeks. After much effort, they were finally referred to Tung Shin Hospital in Kuala Lumpur.

Joseph explained Michelle’s condition to the oncologist as well as their financial situation. It was finalised that  Michelle would need at least six sessions of chemotherapy, with each session costing RM15,000.

She would also require surgery once the tumour was safe to be operated on.

“The total cost, including surgery and aftercare, would come up to RM150,000,” Joseph says, adding that they were told they would be able to pay for each session individually.

He says he is working hard to raise the funds and has been sharing the news on social media in the hope of receiving donations to help them with the costs.

Joseph shared the good news that Michelle’s cancer has reduced by almost 80% from the first session alone.

“Though she experienced some side effects from the treatment and has lost about 6kg, we are very grateful that with just one session, we are able to see improvements and a decrease in the size of her tumour.” He continues to pray for his fiancé’s recovery while doing everything he possibly can to get her through this. He says;

“We truly appreciate any help we can get to raise money to pay for Michelle’s treatment,”