The gang were believed to tail for potential victims and rob them by creating public sympathy around the area. 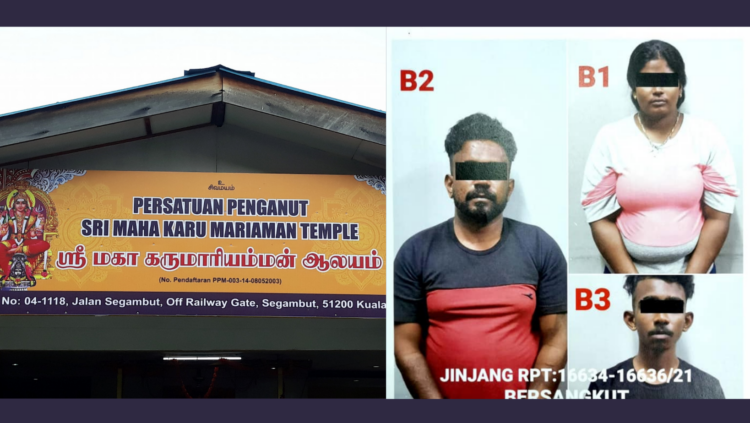 Cops have crippled a woman along with two gang members in connection with a heist that occurred at the Sri Maha Karumariamman Temple in Jalan Segambut.

According to the Sentul District Police media statement, the woman was unearthed to be the ringleader of a gang consisting of herself and two other male accomplices aged 16 and 35. The 27-year-old woman impersonated herself as a beggar and spearheaded the robbery at the temple. She thought her money heist plan was a success but it turned out to be a big time bummer when she was arrested at a residence in Sentul.

The gang were believed to tail for potential victims and rob them by creating public sympathy around the area. This time around, they had targeted the 51-year-old temple priest and assaulted him with a stick and hit him on the head. They relieved the priest of his gold ring, passport, RM500 and two mobile phones before they fled.

In a follow-up operation after the priest, an Indian national reported the incident and all three suspects were eventually arrested. Police recovered one of the stolen mobile phones, RM100, which was actually thought to be part of the loot, and the clothes worn during the robbery. According to the preliminary investigation, the woman has a criminal record for previous theft convictions and drugs.

Meanwhile, her accomplice, the 35-year-old man has 10 offences on record and is a member of a secret society. The suspect is also under the wanted list for drug offences and the other suspect is a school dropout.

The man is also being investigated under Section 52 (3) of the Societies Act 1966 for suspicion of belonging to an illegal society after he was seen bearing a tattoo believed to be a mark identifying the man to a gang. Currently, all three suspects have been remanded for five days at Jinjang Police station.

The cops have advised the public to be extra cautious when approached by beggars and urged anyone with information to call the Sentul police station at 03-4048 2222.