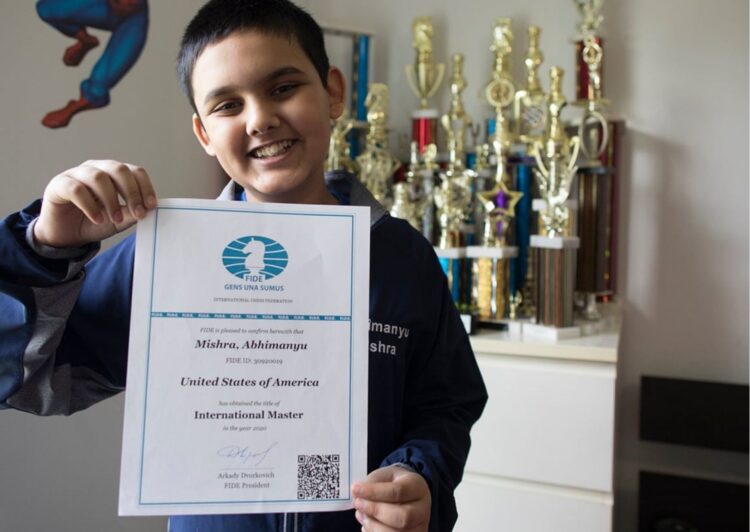 While the 23-year-old me who still struggles over a game of chess, an Indian boy on the other hand has shaken the Chess World by storm. Remember Netflix’s ‘The Queen’s Gambit’? Its reflects the series, there’s no doubt to it but this time around the chess world is swayed by a young boy.

The 12-year-old’s performance shattered the 19-year-old record held by Russian GM Sergey Karjakin, who accomplished it on 12th August, 2002, at the age of 12.

After defeating Indian GM Leon Luke Mendonca in the penultimate round of the Vezerkepzo GM Mix tournament in Budapest, Hungary, Abhimanyu earned his third and final GM norm.

With the black pieces, he defeated the 15-year-old Indian GM Mendonca, achieving a performance rating of more than 2600 over nine rounds, which is a GM norm.

He spent many months in Budapest, Hungary, competing in back-to-back tournaments for the championship and the record.

He earned his first and second GM norms there, in the April Vezerkepzo event and the May 2021 First Saturday tournament, both round-robins of ten players designed specifically for norm scoring.

Abhimanyu began competing in tournaments at the age of five with the guidance of Grand Masters Arun Prasad Subramaniam and Mahesh.

He became the United States’ youngest national chess master, having attained the title at the age of 9.

According to India Today, in 2019, he beat India’s R Praggnandhaa’s record to become the world’s youngest International Master at the age of ten.

When he became the youngest National Expert six months into his chess career, he was marked as a child prodigy.

Abhimanyu’s adventure in the chess world began when he was 2 years old after his father, Hemant Mishra, who originated from Bhopal, India  wanted him to focus on something productive rather than allowing his son to become hooked to the virtual world.

Abhimanyu didn’t receive any competition offers for over a year due to the pandemic which delayed his success, but his incredible dedication has now paid off well.