R. Jeganathan Doubtful Position As A Coach Made Ridzuan Emotional 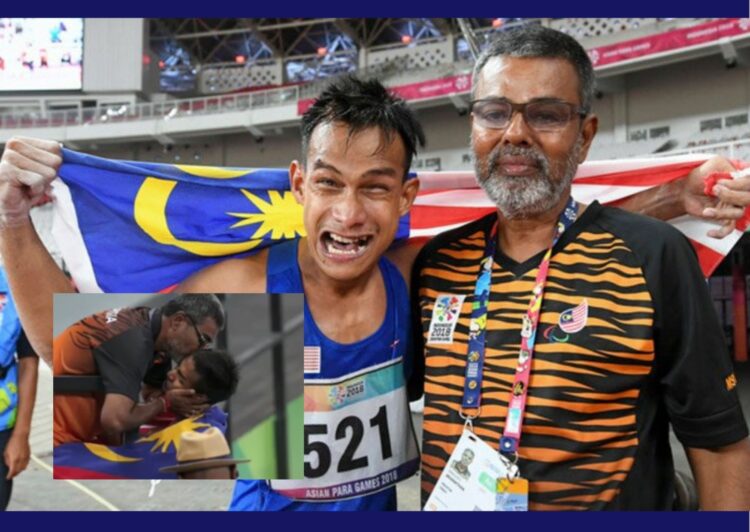 Budget cuts at the National Sports Council (NSC) and the practise with not hiring coaches beyond the age of 60 has left athletes in a dilemma.

Although the NSC has yet to decide which coaches would not have their contracts renewed, para-athletes are concerned about the situation.

Ridzuan Mohd Puzi, a national Paralympian sprinter, has made an emotional speech for R. Jeganathan to be reinstated as his coach as he prepares to participate in the 2024 Paris Paralympics.

“I’m hoping to continue my training with him.” That’s exactly what I’m wishing for.”

But, the fate of his coach R. Jeganathan, who is also the head coach of the Para Athletics, is uncertain, which has put him in a bind.

“Coach Jega, please come back to us… let us fight in the 2024 Paralympics in Paris.”

Most para coaches are currently negotiating with NSC, but financial cuts are likely to strike them hard, putting the national paralympic programme in doubt.

Coach Jeganathan and Ridzuan were previously the buzz of the town due to their true father-son connection.

A clip of Jeganathan hugging and kissing Mohamad Ridzuan after the latter won the country’s first-ever gold medal at the Rio Paralympics in the men’s T36 100m final (cerebral palsy) went viral, making every viewer weep.

Mohd Sofian Hamzah, the head of the NSC Paralympics Department, revealed that Jeganathan’s name was first omitted because the NSC does not extend the contracts of coaches above the age of 60, but they have now chosen to reconsider their decision.

“The dispute is still ongoing. We haven’t made up our minds yet. “We’re weighing the benefits and drawbacks and investigating what the athletes require,” said NSC Paralympics Department Director Mohd Sofian Hamzah.

“We’ve received an appeal letter and are examining it.”