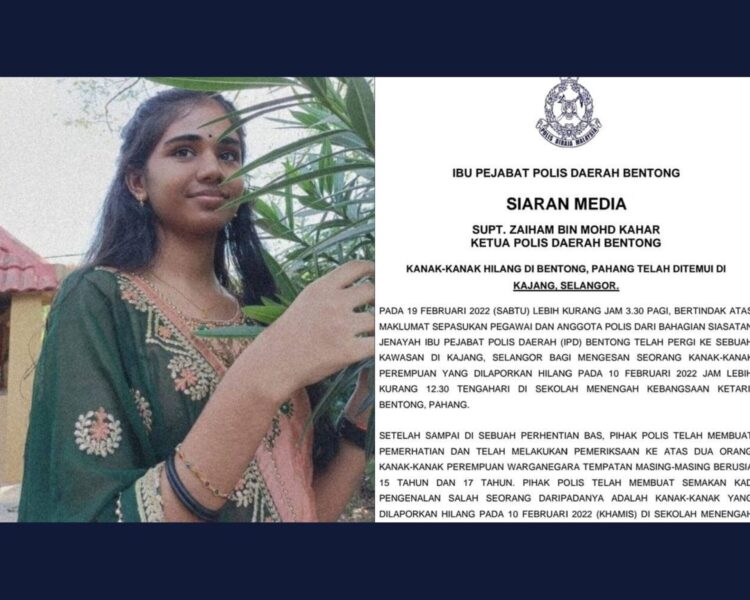 P. Pavitra, who has been reported missing on Thursday (10th February) has been found ‘safe and well’ at a residential area in Kajang. The 15-year-old girl was last seen at Sekolah Menengah Kebangsaan Ketari in Bentong, Pahang and her sudden disappearance creates a buzz around social media sites as cases of missing children have been increasing rapidly.

Her father realised she went missing when he received a call from the 60-year-old van driver when his daughter failed to take the ride home.

According to Bentong police chief Superintendent Zaiham Mohd Kahar, a police team from the district’s Criminal Investigation Department found P. Pavitra along with a 17-year-old female companion at a bus stop at about 3.30am yesterday.

“Upon checking their identification documents, one of them was identified as Pavitra while the other person is her 17-year-old friend.

Pavitra left Bentong in an e-hailing car and stayed at a friend’s residence in Kajang for nearly eight days.  The police team brought the girl back to Bentong and sent her to the Bentong Hospital for a health check-up,” he said in a statement today.

Zaiham encouraged students to communicate with their parents on a frequent basis if they were encountering any issues and to refrain from making hasty decisions that may put them or their parents in trouble.