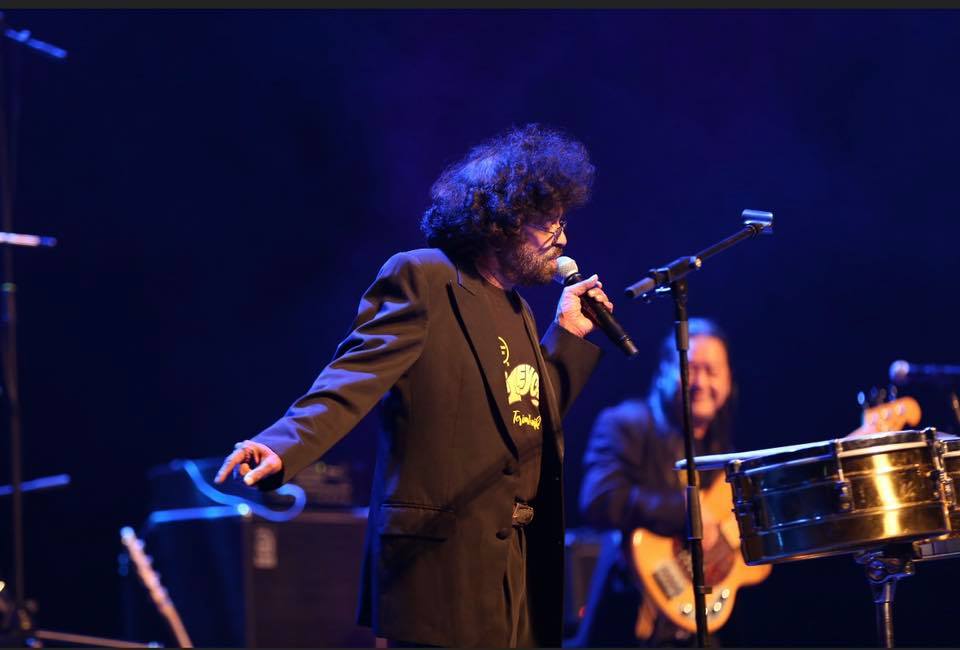 A woman in her mid forties, clad in a purple scarf, turned over to her unsuspecting partner and planted a big kiss on his cheek as Alleycats started playing Seribu Bintang. She then rested her head on his shoulder and the duo sang their hearts out to the ballad.

This was the mood at Alleycat’s 50th Anniversary Concert.

The state-of-the-art MES theatre in Singapore was bursting at the seams with a sea of fans eager to race down memory lane with the band’s greatest hits at Alleycat’s 50th Anniversary Concert organised by Jive Events & Entertainment.

For a millennial born in a time of seizure-inducing repetitive beats, autotune junk and boyband dominance, this was a surreal experience. No opening act, no distractingly flamboyant visuals, no hype emcee. Just half a century of music at its finest.

‘Music has the power to stop time, but it also keeps time’  – Questlove

The veil of time hung thinly over the theatre’s atmosphere. As hit after hit was belted out, everyone found themselves clinging on to nostalgia, reminiscing youthful days and rekindling lost emotions.

Datuk David Arumugam and the band stepped out on stage to roaring applause from an audience that were gripping the edges of their seats in anticipation. Datuk David, who has been performing on stage since his schooling days, cruised around the stage with such ease, as if it was home. By the end of the night, it was clear that the stage was home to him; one with open doors that warmly welcomed everyone to sing, cheer, dance and even shed a tear or two.

Dressed in a black suit with an Alleycats t-shirt underneath, Datuk David stood over a stand that held a hard cover lyric book. His signature afro caught the brilliant hues of stage lighting and his pitch perfect performance amplified through space and time. What a legend!

That was Datuk David’s response to a fan who yelled the signature sign-off “Terimakasihhhh!” from the second tier. Everyone burst out in laughter. The night saw many more ‘Terimakasihhhh!‘s, both from Datuk David and enthusiastic members of the audience. Fans left the evening remarking on how Datuk David ‘sounded exactly like on cassette’. Sekuntum Mawar Merah, Andainya Aku Pergi Dulu, Istana Pasir and  Hingga Akhir Nanti, were part of the list of over 20 songs performed that night.

Being the brilliant performer that he is, Datuk David ensured that the crowd remained entertained even in between songs, as he poked fun at audience members and even gave a quick Tamil lesson. He took so much pride in announcing that he was just 2 years shy from becoming a septuagenarian. “Saya sudah 68 tahun (I’m already 68 years old)”, he said to an impressed crowd.

Datuk David proved that an ageing physique will not stop him from being a brilliant performer and a star. The power of his emotion-steering performance and timeless music spoke louder that the number of trips he made around the Sun.

Dasha Logan glided with grace across the stage in a sequins black and silver gown, embodying the aura of a jazz queen. The ‘Cleverly’ singer has crafted a name for herself in the music scene in UK and South East Asia but this night did not feel like her other gigs. When Datuk David invited Dasha on stage, he referred to her as “anak Loga (Loga’s daughter)” before even mentioning her name.

The entire arena swayed in reminiscence, some even quietly wiping tears that trickled down their cheek, as Dasha sang the 1969 hit Jika Kau Bercinta Lagi. We watched Dasha bearing the legacy of her late father Datuk Loga Arumugam. In a heart tugging moment, a man in the audience yelled, “You are just like your father!” as he clapped loudly after Dasha’s resplendent performance. Dasha had big shoes to fill that night and she did it seamlessly, allowing her individuality to shine just as bright, as she performed Hatiku Kau Luka, Suratan, Berjuta Batu and a rendition of Ed Sheeran’s Perfect.

Saiful, a member of Alleycats, belted out some of their greatest hits with an inexhaustible joie de vivre. Saiful made Istana Pasir and Rayuan Di Puncak Genting his own with strong and elaborate vocals. In between the performances, Saiful was seen rushing off stage and returning with a phone that, we assume, had lyrics to the songs. But, technology can sometimes fail us and it failed Saiful on that night. It felt like an episode of ‘Don’t Forget The Lyrics!’ as Saiful stumbled between forgotten words and the betrayal of a mobile screen.

The audience members were kind enough to fill in the blanks for Saiful during the performance but they also hackled him mercilessly after the performance for forgetting the lyrics. One woman in the crowd put an end to it by yelling some words of encouragement from her seat, “It’s ok. You tried your best bro!”.

And everyone cheered for Saiful.

AB Shaik: The Emcee We All Need

The emcee of the evening, AB Shaik, who is a popular radio DJ on Radio Warna FM, kept the audience fully engaged even during long intermissions between the performances. AB Shaikh left everyone in stitches with his quick wit and nonchalant deliverance.

Alleycats delivered four encore songs, thanks to AB Shaik’s persuasions, long after the show had ended. He even ran into the crowd with a cordless mic to get some lucky fans to sing a duet with Datuk David. AB Shaik was the perfect choice as an emcee for this extraordinary evening; entertaining, insightful and probably the BIGGEST Alleycats fan in attendance that night.

The night was wrapped with the 1999 poignant ballad Layang Layang Terputus Tali. By the end of the evening, a group of women seated at the front row swarmed around Datuk David for a quick photo op and showered him with love and praise.

After a 2 hour long concert, over 20 hits and 50 years of musical excellence, Alleycats received exactly what they deserved.