Meenakshi Sundareshwar; Is There Anything Resembling A Tamil Cultural Film? 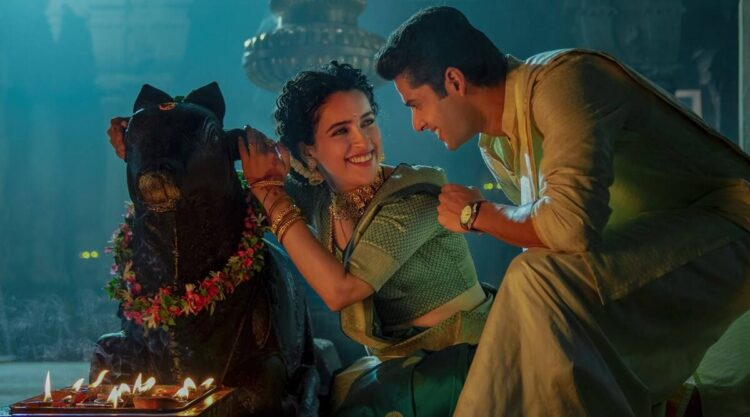 Meenakshi Sunareshwar, a Netflix original film, is not about the famous temple in Madurai, which is located on the southern bank of the Vaigai River but about a couple whose names coincidentally match the historic Hindu temple in the city of Madurai.

Meenakshi (Sanya Malhotra) and Sundareshwar (Abhimanyu Dassani) are the film’s main characters, as their names suggests and the plot does not revolve around them falling in love and marrying.

In fact, the storyline and tale begin after the two tie the knot.

Meenakshi and Sundareshwar’s personalities are quite different. Meenakshi regards Superstar Rajnikanth as God, reads books, is self-assured, and has aspirations to make a difference.

On the flip side, Sundareshwar is an engineering graduate who regards coding as a form of art, movies put him to sleep, and the only thing he does with a book is play “book-cricket.” He is a bit of an introvert, but he believes that his engineering background would make him a good husband.

Having that said,  his time management skills in the movie astounded me to such an extent that I will never forget if someone comes up to me and says anything with “2 hours” or “3 hours” in it. You’d understand if you watched the movie.

Their marriage began solely due to Meenakshi’s grandfather’s belief that Lord Sundareshwar himself had come to seek the hand of his granddaughter, Meenakshi.

Well, the plot line was okay for me because it wasn’t too boring, and I have a weak spot for romantic movies. As a result, the plot appeared to be very good to me. However, I found the movie to be far too perfect to watch.

Watching each scene of the movie feels like viewing a well-painted poster; what I see the film lacking is “realism.” Sometimes, imperfection is the key to a piece of artwork, and the filmmakers have chosen to ignore that aspect.

As a Tamilian, I couldn’t really connect to this film. I’m not sure why Bollywood movie makers believe we adore Rajnikanth. There are some south Indian Tamilians who don’t really favour Rajnikanth’s movies.

Then there was Chennai Express, and now there’s Meenakshi Sundareshwar. That’s it, no difference. I mean, the filmmakers could have completely avoided incorporating the part of Tamilian culture into this movie. Because the plot itself was enjoyable, and I believe many fans of romantic movies would have enjoyed it as well.

But their mistake was basically adding the Tamil culture, and doing so in a very stereotypical way. It appears that they did not conduct proper research on the culture in the real, present world.

According to @inquisitivekidd on Twitter, “South isn’t just Idli Sambar and Rajnikanth movies.”

I completely agree with that statement, and I hope that in the future, when Bollywood filmmakers decide to make a Tamil culture film, they do their research thoroughly or abandon the idea entirely, because they will be roasted regardless of how well the storyline goes.

Finally, I’d also like to touch on bits of the film that I actually liked. Long-distance relationships do not only occur in dating relationships; they can also occur in married relationships.

I can’t emphasise this enough when Sundareshwars says, “communication is like oxygen for relationships.” Because it is true, and it is what is lacking in today’s relationships.

Sometimes the digital world just kills the essence of proper communication in a relationship, but it can also be a saving factor. In long-distance relationships, however, being digital is the only option, despite the fact that it can be a difficult and sometimes exhausting task. In this movie, they discuss how this issue can be overcome even though it is a digital form of communication.