Is Suriya willing to lend his ears to any form of critical acclaim? 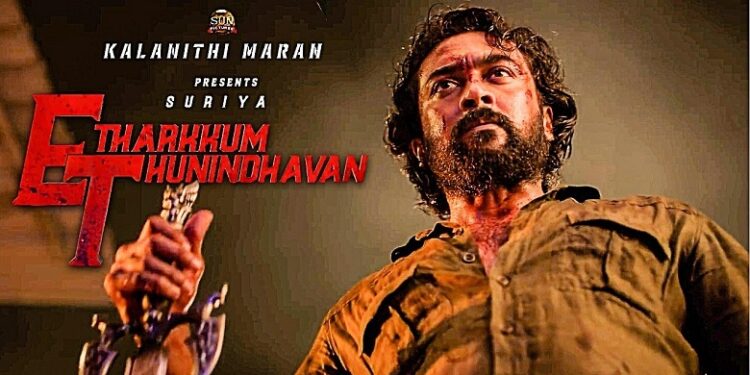 Loosely based on Pollachi’s sexual-assault incident, Etharkkum Thunindhavan is a Pandiraj directorial that sets aflame to matters concerning women’s dignity and safety in an ideal world.

The narrative sees Kannabiran (Suriya) play a righteous lawyer again, after Jai Bhim, but of a very different kind. Unlike Chandru, Kannabiran does not fight only in courts. He stumbles upon a network of men headed by influential politician Inba (Vinay) who dupe women into relationships and later harass them with intimate videos taken without their knowledge or consent. Unfortunately, Adhini (Priyanka Mohan) will end up with the same situation as the rest of the women faced. Will Kannabiran help them get justice?

Despite featuring a range of factors such as societal issues, action-packed sequences, and rom-com, the film’s execution is what it’s all about. A film with a strong social message against women deserves special mention, since the director’s purpose in highlighting this issue was noble, but what makes the film less impactful?

The plot was pretty intriguing, but the entire screenplay was not solid enough to have an impact. Predictability; the biggest issue Pandirajand despite the honest intentions, it’s not quite hard to guess as we delve further into the trajectory of the story. The monotony in the second half and the villain sequences get on your nerves beyond a point.

Does the screenplay serve justice according to the plot?

Well, a good question with an unexpected answer is a blatant NO as everything up to the climax was predictable, and the revealing twists and turns doesn’t surprise the writer.

Meanwhile, some of the dialogues which has impressed and left a huge impact to the writer was;

“When you’re not on the wrong side, why do you have to be ashamed of those irresponsible / uneducated men”.

Whilst retaining the flow, we won’t deny that the climax was executed with the fight scenes and the exploitation of women in the name of fake love was shown satisfyingly. Having said that, Suriya, on the other hand, puts up a brilliant performance in a mass-centric role that is also a strong hymn to women.

On the technical front, Rathnavelu’s cinematography stands out, thanks to the silhouette shots of temples, and fighting sequences, garnering the attention of the audiences.

Well, we wouldn't deny that crime thriller are always a treat to watch! Vilangu; Penned and helmed by Prasanth Pandiyaraj,...