Imaithidaathe Kangal; The Multi Award-Winning Malaysian Short Film Deserves A Round Of Applause

Penned and helmed by Ravindran Rajendran, Imaithidaathe Kangal (Voice of My Eyes) connects the dots between empathy, the place where we can step into the shoes of another person, and time – an individual’s worst enemy.

The multiple award-winning short film will tug at your heartstrings and leave you with a sorrowful yet joyful sensation that these tearjerkers are fondly known. Huumessh, Sureeta, Resh, Geoffrey, T. S Mogan, and Rathanasamy are among the talented cast who features in the short film.

Imaithidaathe Kangal, encapsulate the creative and unique vision of the filmmaker by coming up with a beautiful storyline.

With more than 25 submissions and 16 nominations, the short film has earned a total number of 24 awards – Ravindran Rajendran

All I would say is, this short film well-deserved for the awards! 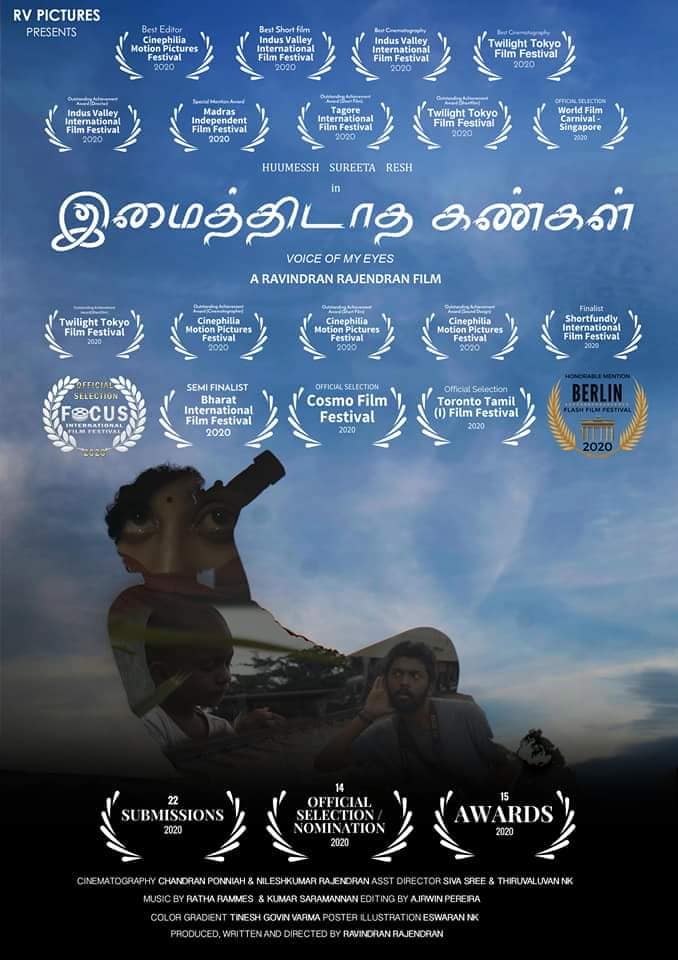 The 21-minute long short film portrays a young couple who abandon their new-born who was being uninvited, the baby grew up with hearing and speaking disabilities. He was then kidnapped and forced to beg by a gang leader. However, he still maintained his innocent smile, despite the fact that he had no idea that his life was about to be immersed in darkness. But, somehow his life began to shine upon him after he met a photographer. He observes life more closely, displays positive ideals via his eyeglasses, and educates people with whom he comes into contact with his innocent grins. One day when he was about to start his usual routine, he came upon an old lady who was sitting alone on an empty street.

She begged him for nourishment, which reminded him of his early days, so he brought the lady under his protection without realising it was his mother. As the film progresses, we would know who are the true handicaps, he made us wonder?

As you sow, so shall you reap –  Karma

On the music front, Ratha Rammes & Kumar Saramannan from OneSoul Records have made this short film more engaging with their creation of soothing music that captures the essence of rural life.

Kudos to the entire crew who made the short film plays with reality and fate in such a unique way:

A powerful, heart wrenching and excruciatingly realistic, this award winning short film will surely give you a new perspective on life.