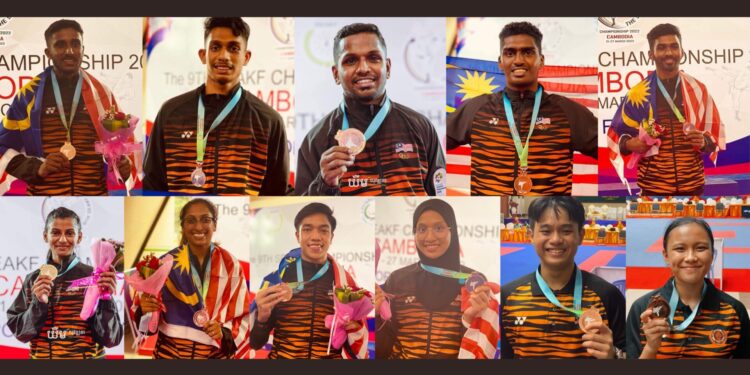 The squad which was led by P. Arivalagan, who was named technical director in January, returned back with 5 Golds, 3 Silvers, and 4 Bronzes from their first international competition of the year.

The highlight was the contribution of the prestigious gold medals to Malaysia by newcomers V. Kueggen and H. Sureeya Shankar.

The 20-year-old Kueggen hammered his way to a 12-3 victory in the men’s kumite under 60kg final, defeating Cambodian foe Ly Kouy Hav. Kueggen, who was called up to the national squad after the National Karate Championships in Serdang last month, is making his first international debut.

Meanwhile, the 20-year-old Sureeya made his name in the senior ranks with a powerful 12-4 triumph over Dang Hon Son of Vietnam in the men’s kumite under 67kg final. He has been a member of the national team for almost two years, and this is his first step into the senior rank.

The men’s kumite team of Sureeya, Prem Kumar, R. Sharmendran, S. Kathish, and G. Pillai won the fifth gold medal with a 3-1 victory over Vietnam on the final day of the championship.

Malaysia finished on the podium in all seven male kumite categories, which added to the achievement.

Prem, the team captain who won the first gold in the men’s kumite under 55kg on Saturday expressed that Malaysian karate has a promising future thanks to his junior teammates’ performances.

“We’re pleased with a strong showing in our debut international appearance. It’s a terrific start,” said the 28-year-old, who previously won bronze at the 2018 Asian Games in Indonesia.

“Competing at the international level at such a young age is beneficial to young athletes.  Because of the early start, I feel they have received great knowledge and will have a longer career in this sport.”

Prem went on to say that the team would concentrate on mending their mistakes in training before the Hanoi Games in May.

Congratulations to all of the winners and we are super proud of you.