The trailer of Ajith’s Viswasam was released earlier today. Ajith fans have been going crazy with the YouTube clip fetching a whopping 1.3 million views in 2 hours.

Viswasam stars Ajith, Nayanthara, Yogi Babu and Sampath. This Siva directorial looks to be a village don vs city mobster action film. No official release date was given, except for the vague ‘Ponggal 2019’ hint.

Ajith feigns a Madurai accent and is replete with the handlebar moustache extending as far horizontally as possible, in his trademark white shirt and matching veshti. The story is set in the town Theni. There appears to also be a ‘support the farmers’ element in the trailer.

The music is composed by D Imman, and the full jukebox has been released. The Ajith introductory song, Adchithooku and the Sid Sriram tune, Kannaana Kanney are hits already. 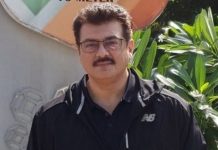