While people may be all abuzz about Bollywood actress Kangana Ranaut‘s role in “Thalaivi” and yes, we are equally excited to see her portrayal of the late J. Jayalalithaa in the film, but the one question we have is why was veteran actor Prakash Raj‘s role as M. Karunanidhi kept away from the trailer?

News had it that Prakash Raj is set to nail the late great Tamil Nadu Chief Minister in the upcoming new film set for its theatrical release on 2nd April. But as we watched the trailer, we did not come across the veteran actor’s role.

Why, you ask? Well, his role is actually replaced by one of the most acclaimed actor in south indian film industry, M.Nassar. 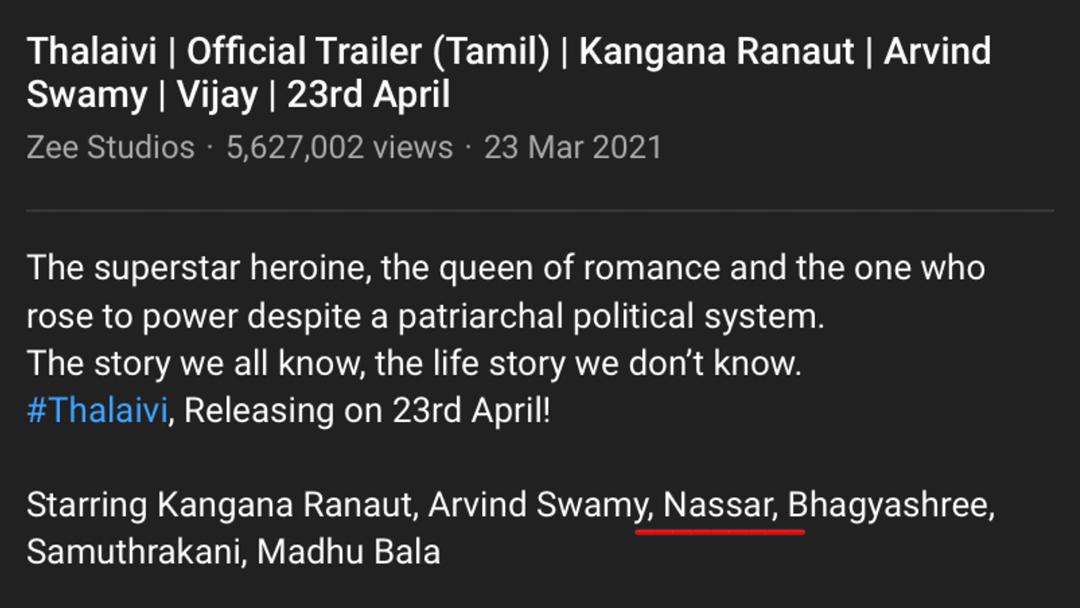 On a good note, movie buffs are now able to watch the newly released trailer! It was released yesterday to mark Kangana‘s 34th birthday, and it has been bombing all over social media ever since.

Kangana won the National Film Award for her roles in Manikarnika and Panga just a day before the trailer for “Thalaivi” was announced. This is her fourth time winning a National Award.

As we all know, The film “Thalaivi” narrates the tale of the late Iron Lady of Tamil Nadu who served for six terms as Chief Minister of the state, Jayalalithaa who is also affectionately known as ‘Amma’ and who was also once a legendary actress in the Tamil and Hindi film industry.

The multilingual film is produced by Vishnu Vardhan and Shailesh R. Singh and apart from the outspoken Bollywood sweetheart, it stars Arvind Swami as MG Ramachandran, M.Nassar as M. Karunanidhi, Jisshu Sengupta as Sobhan Babu, and Bhagyashree as Jayalalithaa’s mother Sandhya.

The trailer depicts Jayalalithaa‘s emergence in the film industry, as well as some politicians’ shameful act of almost disrobing her when the house was in session.

Jayalalithaa‘s disrobing is compared to Draupadi’s humiliation in Mahabharata, and Kangana‘s dialogue delivery during that sequence is probably the trailer’s most powerful scene.

Fans, on the other hand, are taken aback by Kangana‘s dramatic transformation in the trailer. The star gained 20 kilos to imitate the actress-turned-politician Jayalalithaa. She had a crazy busy plan to keep up with Jayalalithaa’s looks.

Fans who have seen the trailer have been impressed with the level of detail displayed in it. It was really close to perfection.

OMG SUCH LEVEL OF PERFECTION IS UNSEEN 💥🤩

And What's More? After Jayalalithaa, #KanganaRanaut is all set to play Indira Gandhi as well✨

What are your thoughts on the teaser, and how did our favourite Bollywood girl fare? Let us know what you think in the comments section below.