Kash Villanz a member from the Villanz rapping group happens to be one of the leading rappers in the Tamil music industry in Malaysia. The man that has received multiple awards for his rapping skills and catchy songs for Best Hip Song and Best Song Award has now been awarded with a Doctorate for his influence in arts and culture by the Malaysia South India Chamber of Commerce.

The rapper achieved fame after the success of his ‘Scooter Vandi’ video in 2012 featuring OG Dass and songstress Shamini. Mention ‘Scooter Vandi’ and it will sure ring a bell. 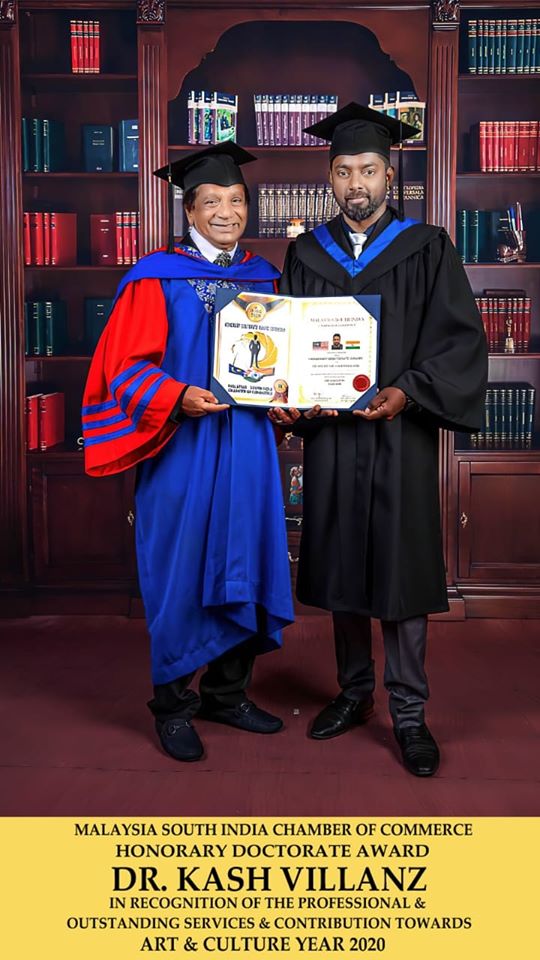 He hit the limelight in year 2006 after releasing his first debut album Asthivaram. His tracks were an immediate hit on the charts. His songs constantly remained at the Top Ten Charts in multiple radio stations, at the same time garnering immense support from his fans. His second best album was Saagavaram in 2008. The success he obtained in Saagavaram became the driving force for him to release another album Vaathiyar – The Kingdom of Janmavaram that became his largest and best all time album.

Kash Villanz has also bagged numerous awards by winning the Best Newcomer Award at the Malaysian Indian Music Industry (MIMI) in 2007 for Asthivaram and the Most Popular Album Award at the Raaga Radio Awards in 2009 for Saagavaram. The rapper has also made a name for himself in the local music scene and was nominated for the ‘Best Indian Album’ at the Anugerah Industri Muzik (AIM 15).

He also wears many hats by taking on the role of executive producer for V-Hommiez Ent at the same time this accomplished rapper is also a composer, sound engineer and recording artist. Kash Villanz was also the music director for an Indian movie Ego released in 2013.

We from team Varnam would like to congratulate him for his outstanding achievement and extend our best wishes to the rapper extraordinaire.