Photographer G Venket Ram has recreated some of the iconic paintings of the 19th century painter Raja Ravi Varma’s for a calendar. He roped in popular south actors Samantha Akkineni, Shruti Haasan, Ramya Krishnan and Aishwarya Rajesh as his muses. 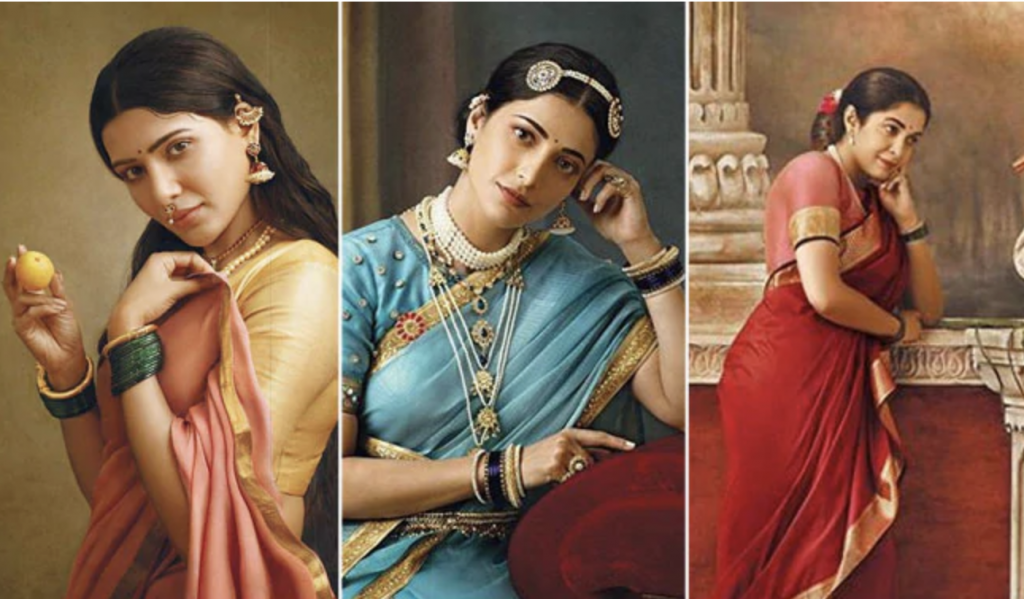 Samantha shared a stunning picture of herself, recreating Varma’s painting of a woman holding a fruit. “Always the best working with you @venketramg… recreating Ravi varmas work for NAAM. So glad I could be a part of this meaningful project .. Thankyou,” she wrote in the captions. Former actor Namrata Shirodkar called her ‘so so pretty’ as Kriti Kharbanda exclaimed ‘Wow!’

Ramya recreated Varma’s painting of Damayanti. Just like the original, Ramya is seen dressed in a red sari, talking to the swan who told her about King Nala’s love for her. “Recreating Ravi Varmas work for NAAM …feeling blessed thank you @suhasinihasan for this wonderful opportunity and @venketramg your the best…..glad to have been a part of this project,” she wrote with her picture. Actor Khushbu Sundar wrote, “My dear @meramyakrishnan I am seriously thinking of disowning you as my friend.. you are so beautiful that I feel jealous n envious of your beauty.. yenna pannalaamnnu neeye sollu.”

Shruti Haasan recreated two paintings of Raja Ravi Varma. One is a lady by a river while another is the Rani of Kurupam. She is dressed in a purple sari for one and in a blue, ornate sari for another. “Such an incredible experience shooting for this and such an honour to be associated with this cause !! Thankyou @suhasinihasan Akka for making me a part of something so memorable,” she wrote with the pictures.

Aishwarya Rajesh also posed for a picture. “It was a fantastic experience working with G Venket Ram (@venketramg) and suhasini (@suhasinihasan) for recreating Ravi varma project for NAAM. So glad I could participate in such a meaningful project,” she wrote. In her photo, she is seen sitting on a chair in a red sari, holding a small bouquet of roses.

It was released in celebration of Naam Charitable Trust, which completed a decade of work in women empowerment.