The cine world is famous for having celebrities venturing into multiple persona changes to fit certain characters in order to play well the role given in their respective movies.

Kollywood film stars are well-known for taking up such nerve-wrecking challenging roles going into a complete transformation of themselves to feature the role given to them with utmost flair and finesse.

Silambarasan or known widely by fans as Simbhu has done a mind blowing transformation,  giving us A full on ‘Modified’ look for his recent movie  Eeswaran!

The actor has shed a few extra pounds for his recent village drama debut. He shared the announcement of his recent debut on his official Twitter page, giving us a hint that the movie is expected to hit the screens on Pongal 2021.

Get a full insight of his transformation journey here!

Eeswaran marks a very special tribute for STR, being his 46th movie debut in the much-hyped Indian cinema, all at a wondrous age of 37!

The movie will be premiered in 4 different languages across India and is directed by Susienthiran, whom has garnered prodigious recoginition At the National Film Award for best popular film.

Eeswaran is keeping us in anticipation as we await to witness this much peculiar storyline in full throttle excitement.

The young superstar of Tamil cinema debuted as a child actor in 1984. He is one versatile talent that wears multiple hats in the film industry as an actor, director, writer, composer, dancer, lyricist and playback singer.

Simbhu has also taken it further by releasing a country beat part of Eeswaran’s music on his official Twitter account recently!

The Beats of #Eeswaran 🥁 on @thinkmusicindia 🎶 !!

Looking forward for more to come! Whilst wishing Simbhu, a heartiest good luck and congratulations on his 46th release! 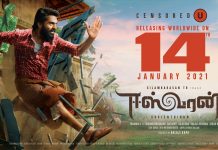