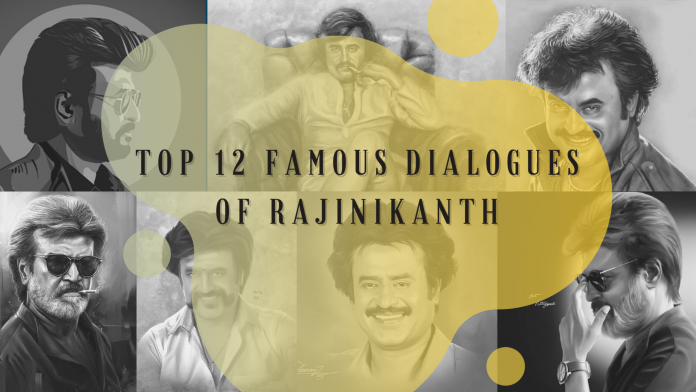 First things first! Happy Birthday Thalaivar! Superstar Rajinikanth who rules the south Indian cinema fraternity actually needs no introduction. Even a child will sing praises to him because he is just a born superstar.

As a treat for our beloved Rajinikanth’s fans, we have compiled his all-time top 12 best dialogues.

This dialogue is from 16 vayathinile where he acted as a villain and it is one of his first movies along with Kamal Hassan and Sri Devi.

It is Kalaiyan’s epic dialogue in the whole movie, Murratu Kaala. This movie will be celebrating its 40th anniversary this 20th December.

Annamalai was released in 1992 and was a blockbuster hit that it ran for 175 days in theatres and was the highest-grossing film in Tamil cinema until 1995.

This dialogue for Arunachalam with the bangle gesture was just so charismatic and this movie went on to win three Tamil Nadu State Film Awards, including an award for Best Film.

Well, this dialogue is a common one amongst Rajini‘s fans. Enthiran marked the debut of Legacy Effects studio (which was responsible for the film’s prosthetic make-up and animatronics) in Indian cinema.

Sivaji; The boss was converted into 3D and released on 12th December 2012 as Sivaji 3D for his birthday. The runtime of the 3D version was shorter than the original, cut to 155 minutes, and released amidst moderate fanfare and fared positively, critically and commercially.

This dialogue is from Padayappa and apart from our Superstar’s performance, Ramya Krishnan‘s performance was praised, winning her a Filmfare Award under the Best Actress category. The film also won five Tamil Nadu State Film Awards.

Well if you think, which movie broke Annamalai’s record? It was another Superstar hit, Bashaa that ran for nearly 15 months in theatres. Rajinikanth won the Filmfans Association Award and the Cinema Express Award for Best Actor for his star-studded performance.

Did you know? The “Baba symbol” which was so famous back then was not just any symbol but a hand position called Apana Mudra in yoga which stands for “detoxification and purification”.

Rajinikanth‘s English line “How is it?” (pronounced “Owwizzit?”) in Veera became immensely popular, as did the response “Super” (pronounced “Soopar”). What? Do you still come across this dialogue among your friends?

Kaala was the first Indian film ever to be released in Saudi Arabia, following the country lifting its ban on public theatres in December 2017.

Kabali was released on 22nd July 2016 and was released in the Malay language on 29th July 2016, a week later. It is also the first Indian film to be released in Le Grand Rex in Paris, France, the world’s largest movie hall which has a seating capacity of 2,000.

We wish our beloved superstar with the best of health that would enable him to hit the screens with impactful movies embedded with style and pomp!  You will always be the one and only SUPERSTAR Rajini Sir!