Navratri With Sadhguru; Devi and Mahishasura – Slaying the Beast

Every year, Navratri is commemorated with tremendous fervour across the country. Devotees worship Goddess Durga and her nine incarnations throughout the nine-day celebration, which is also known as Sharad Navratri. The most significant Hindu festival has begun from 7th October and will culminate on 15th October with Dussehra.

On this Spot, Sadhguru writes about what makes the upcoming Navratri special, which quality in a human being it emphasises on, and what aspect of the human system particularly distinguishes us from any other creature. In this context, he also throws light on the traditional symbolism of Devi slaying Mahishasura. “Mahishasura, who is traditionally depicted as half-man, half-buffalo, indicates the bestial nature.

This culture draws its roots on profound observations of the human system and its relationship with the Earth, the Moon, the Sun, and different aspects of the Divine. This is also reflected in when and how we celebrate our festivals. We are approaching a special time for Devi, who represents the feminine nature of the Divine.

Navratri literally means “nine nights.” These nine nights are counted from the day after the new moon day or Amavasya. The first nine days of the lunar cycle are considered feminine. The ninth day is called Navami. One and a half days around the full moon is a neutral time. The remaining eighteen days are masculine in nature. The feminine phase of the month is about Devi. That is why, in the tradition, up to Navami, all worship is dedicated to Devi.

of the lunar cycle

Each of these twelve nine-day periods in a year is focused on a different aspect of the feminine Divine or Devi. The Navratri that is coming up is considered as the most significant one because it is dedicated to Sharada, the goddess of learning. Among the many things that a human being can do, this tradition lays greatest emphasis on learning. Other creatures can run faster than us; they are stronger than us; they can do many things that we cannot do – but they cannot learn like we can. The pride of being human is that you can learn just about anything – if you are willing. 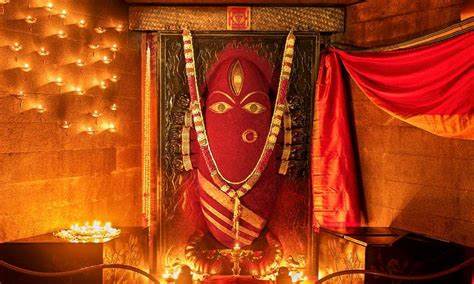 Therefore, for this Navratri, prepare by learning something new. Another aspect that fundamentally distinguishes us from other creatures is beautifully represented in the imagery of Devi slaying Mahishasura. Mahishasura, who is traditionally depicted as half-man, half-buffalo, indicates the bestial nature in man. Because of the evolutionary process, elements of the qualities of an amoeba, an earthworm, a grasshopper, a buffalo, and every kind of beast that developed in the course of evolution is still in you. These are all compulsive tendencies. Even modern neurology recognises that one part of your brain is reptilian. In the evolutionary process, the reptilian brain represents the stage of development that is dominated by instinct.

Whenever you have problems with people around you, it is fundamentally about the boundaries between you and them, or between what is yours and theirs. If you function only from one aspect of your brain, you can get by, but you will not utilise your full potential. The yogic system has methods to, in a way, open up the reptilian brain so that it starts communicating with the cerebral cortex and both function as one brain.

There are studies which show that this can be achieved with certain meditation practices. The flower should open up. That is why in the yogic culture, there is the imagery of lotus flowers to symbolise the chakras in the human system, with the biggest flower representing the Sahasrara at the top of the head.

If the cerebral flower opens up, human intelligence starts functioning in a unifying, inclusive way. Inclusiveness is not a philosophy. Inclusiveness is the nature of existence. No other creature is able to realise this. They are all busy fixing boundaries. A dog is peeing all over the place not because of urinary problems but to establish his kingdom. Human beings are doing the same thing in different ways.

They, too, are fixing their boundaries and, if possible, pushing them a little bit. The symbolism of Devi slaying Mahishasura is about killing the beast in man. This means you become a big flower. You have the choice to either open up your reptilian brain, or Devi will put you down. Another dimension of the symbolism is that the masculine, by its own nature, lives instinctively. That means the reptilian brain is like a tight fist. When the feminine comes in, it can open up. When it opens up, the masculine or the beastly nature falls at her feet. The symbolism of Devi and Mahishasura shows just that – because she rose to full power, the bestiality was brought down.

Some plant-based dietary individuals believe meat causes cancer and destroys the planet. But meat-eaters often argue that giving it up...

This could be the right time for all of us to be responsible in preserving the environment and making mother...

Meatless meals are becoming more popular, according to Stuff, as more people choose vegan, vegetarian, and flexitarian diets and store...

One of the most important element to combat climate change is SOIL. Despite the fact that it is all around us...