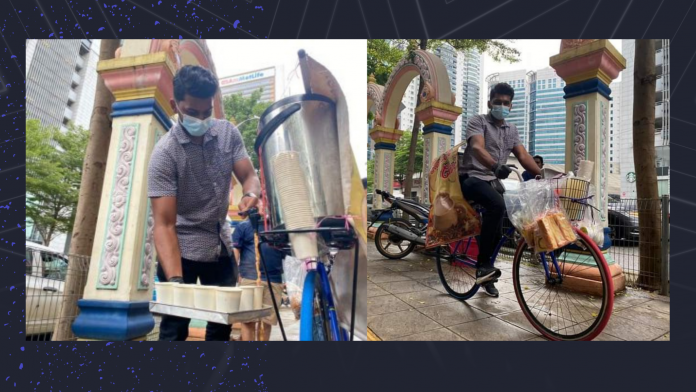 A young tea-seller with a 90’s bicycle at the heart of the town…. Well, many of us would have definitely seen fictional characters in movies, and wondered if someone as such ever exists, and, YES HE DOES!

OH MY! He has definitely made the talk of the town, having a huge reach for not only his looks but his inspiring story that made him venture into this business.

This fit, handsome person, Mr. Kavie is very inspirational and motivating to me. Graduated from Uniten with mechanical engineering last year but unable to get an engineering job due to this unprecedented year. pic.twitter.com/HCGYhix1MJ

Kavie, is a brilliant Mechanical Engineering student from the University of Tenaga Nasional, who started selling tea at brickfields on a bicyle.

Due to the hits of the COVID-19 pandemic, among the many that were affected with the unexpected major downfalls of this year, Kavie is also one of the victims facing unemployment issues due to the employment downfall in the country.

His story behind the awe-inspiring venture was due to his love for masala tea. So, he started selling tea, for his own self sustainment!

Now, that’s something we should definitely look up to. Despite having paper qualifications, as a certified engineer, he started up his own business for his own support and allowance!

The idea of selling tea on a bicycle was inspired through the techniques teas are commonly sold in India, in an easy portable manner using bicycles to carry it easily wherever they go to whoever that wants it.

Kavie, starts selling his tea everyday from 3 p.m -5 p.m, and goes around cycling to customers when they call him at Brickfields.

He has a another friend helping him sell at another area with the same business model.

His amazing venture is supported by his friend and he sells about 200 cups a day from 3pm- 5pm, in just 2 hours!

So folks, if you ever come by Brickfields from 3pm to 5 pm, be on a look out for Kavie or just give him a call wherever you are and you would be served with hot pipping masala tea instantly then and there! 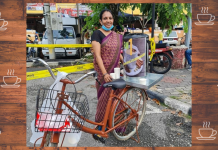 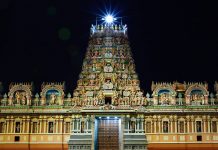 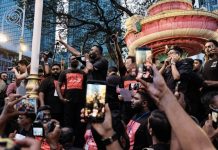