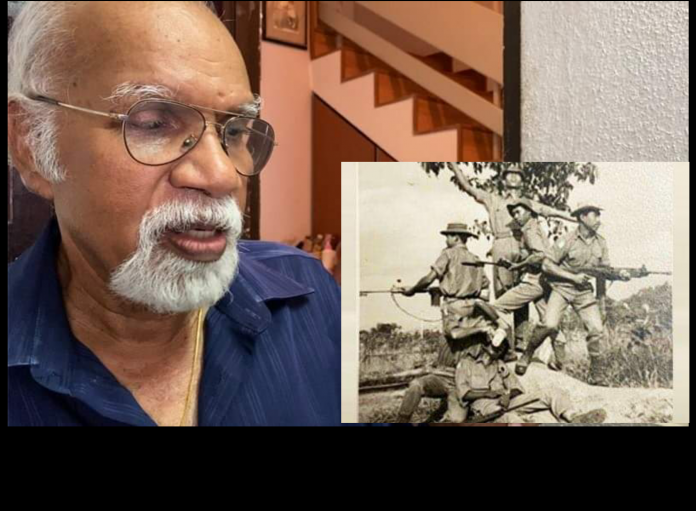 It was an easy breezy job to shape Malaysia, said no one ever! The formation of Malaysia was faced with every opposition present in order to halt the birth of our beautiful nation.

Ex-platoon sergeant Gopal Govindan Nair, has survived a series of numerous wars while serving for his homeland.

At the age of 19, the Malaysian warrior joined the army in November 1964, in Penang. He was sent on his first voyage out of Penang to be part of the Singapore Infantry Regiment’s Second Battalion at Temasek Camp. After his training, he was dispatched to the front lines, and witnessed difficult operations fighting against Indonesians in Kota Tinggi and Pontian in Johor.

Later, before going to Wallace Bay, Sebatik Island near Tawau, Sabah, to combat the Indonesian communist rebellion in 1966, he was briefly assigned to Batu Gajah, Perak, to fight the communists. He was then moved to Serian, Sarawak, where he had an eventful encounter.

“The Paraku was a communist group who were against the formation of Malaysia. They wanted all Borneo territories to be made into a leftist country. The jungle of Serian in the Borneo rainforest is where you needed true grit and stamina as you could be sprayed with bullets from the guerilla forces at any time,” he told Free Malaysia Today (FMT).

“You are standing on a hill, thousands of feet up from ground level. There is no water and you don’t get to shower. All you can do is take off your clothes, wring the sweat out and put them back on again. You do this for two weeks while trying to bear your own stench.

“It was a 24-hour day job. As part of a rifle company, I had to stand guard. We had to train to be energy efficient, as we were only given 14-days of food rations,” he further added.

Gopal encountered the worst fighting in the undeclared war in Johor, Singapore and Borneo, the result of the Indonesian confrontation by insurgents.

Over 100 soldiers died between 1964 and 1966. Most of the soldiers were young and they were exposed to good training. Therefore, they managed to win the war. As a diverse nation, it was their first war, and yet they aren’t recognised and honoured as war heroes.

In different areas of the interior of Borneo, Gopal continued to work. He was deployed to the peninsula from time to time to face communists from Thailand who had invaded Grik and Sungai Siput jungles.

Apart from that, he was also chosen to be part of the groundbreaking Rajang Area Protection Command in 1972. He was a sergeant with the task force operating in Kalimantan against the Indonesian communist insurgency.

After 13 years of service, in 1977 Gopal left the military and started working with a RM70 salary and upon retirement, his last cheque was only RM300. Since retirement, he has been working at the Penang International Airport as a limousine driver, however lost his source of income due to the pandemic.

Those who struggled tooth and nail to maintain the independence of the Federation of Malaysia have been overlooked by the government and the younger generation.

Allow me to test your knowledge on history. Are you aware about the Indonesian confrontation by the Indonesian Communists rebellion which took place in the 60s?