Bala Chantran Needs Over RM11,000 For A Prosthetic Leg A single mother is asking for funds to help her son regain his ability to walk after his leg was amputated earlier this year.

According to News Straits Time Press (NSTP), R. B. Mageswari, 49, told that she took her 15-year-old son, Bala Chantran, to a nearby clinic after he complained having a back discomfort on April this year. He was sent back home as they assumed it was only a muscle pain. 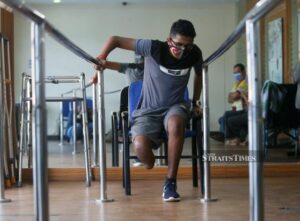 After a few days, she noticed that her son was having appendicitis and right away brought him to Universiti Malaya Medical Centre (PPUM). She was told that her son’s appendix had ruptured and the infection had spread all over the body.

Bala was in intensive care unit (ICU) at PPUM for 2 months before he was transferred to the normal ward. The doctor informed Mageswari that they had detected infection on her son’s right knee and informed that his leg had to be amputated or else it will be a threat for his life. Bala is an active and fit boy until this unfortunate incident happened. He would spend his time playing football which he was passionate about, and also learned taekwondo. He was devastated when he get to know that his leg was to be amputated.

Bala’s mother had to take a decision and said yes to the doctors. After the procedure, Bala is now using walker and wheelchair to move around the house. Mageswari is working as a babysitter during the day and in the evening she works as a part-timer at Domino’s Pizza. But after her son’s amputation she quit her job at Domino’s Pizza and started to focus on her son while babysitting at her home.

Besides Bala Chantran, Mageswari has 3 daughters and one of them started working while the others are still studying at polytechnics . This single mother is managing the family with a mere  earning of only about RM800 per month.

She is now looking for funds to help her son get a prosthetic leg so that he could walk again.

For those who want to donate, cheques can be made payable to the Media Prima-New Straits Times Press (NSTP) Humanitarian Fund with the patient’s name written on the reverse side of the cheque and addressed to Group Strategic Communications Department, Media Prima Berhad, Level 4, Anjung Riong, Balai Berita, 31 Jalan Riong, 59100 Bangsar, Kuala Lumpur.