Malaysia being a multiracial country with various intricate cultures and traditions, and one of the main tourist spots in the country has also been our temples which have earned a renowned place as a must visit tourist site for it’s amazing artifacts.

Here are the most amazingly beautiful temples in our country that are a definite must visit!

The temple is specially dedicated to Lord Murugan and devotees would have to climb a flight of 272 vividly coloured stairs to reach the shrine in the cave.

Famous and known among all Hindu temples across the nation and India, Batu Caves Temple has been a pilgrimage spot for Indian Hindus, particularly South Indian Hindus.

It holds a beautiful Hindu temple inside a complex of limestone caves and is always a coveted tourist destination and temple that each day seeks the attention of hundreds of thousands of Hindu worshipers.

The caves have resided here for about 400 million years, as defined in the historical discoveries. Besides tourists flocking the pilgrimage site every year to pay their vows, the caves have earned the name as one of the main tourist attractions in Malaysia for its picturesque stairs.

The temple is situated in the heart of Kuala Lumpur. As the oldest Hindu temple in the city, it is a great tourist attraction spot in the suburbs of Chinatown, where most tourists make this temple their ‘must visit places’ to simply view and admire in awe this beautifully designed shrine.

Founded in 1873, the temple resides at the edge of Chinatown in Jalan Bandar (formerly High Street). In 1968, a new structure was built, featuring the ornate ‘Raja Gopuram’ tower in the style of South Indian temples.

It has definitely gained massive fame since it was unveiled for the general populous in 1920, as the worshippers of Amman continue to gather here every year without failing to pay their respects to the gods.

This temple’s intricate sculptures and portentous design contribute a great significance to its beauty. Its entrance, with all its impressive Gopuram, gains the admiration of tourists worldwide.

As a famous temple with 228 Hindu deity idols that are worshiped by devotees over the years, the number of tourists increases exponentially mostly during Deepavali and Thaipusam.

Standing magnificently nearby I-City Shah Alam, this temple is definitely an eye-candy that cannot be missed. The temple earned a name for itself as the I-City Shah Alam temple among locals due to its strategic and nearby location to I-City.

This temple is well known among people for its astounding glorious lighting with amazing statue sculptures obtaining a spot as a must visit temple in Malaysia.

Most temples in Malaysia are commonly known for their huge statues built as an emblem to the temple. I-City Shah Alam temple has an enormous Madurai Meenatchi Amman temple with a parrot on her hand is an attractive site from meters away on the highway.

The is the first temple in the world to have a skyscraping Madurai Meenatchi Amman statue.

The speciality of this temple is their Saturday prayers, when all the lights in the shrine are swtiched off and the only light illuminating the entire temple is the theebam shown to the Amman.

The goosebumps effects caused from the prayers is sure to have you amazed with bewilderment as you catch the prayers devoted to the Amman.

This temple is the most wanted temple for weddings and events for it’s confounding architecture and ambiance!

In Johor Bahru, the Arulmigu Sri Rajakaliamman Glass Temple is a Hindu temple sure to be gazed upon. It is one of the tourist destinations in the state.

On 12th May 2010, the temple was recognised as the very first glass temple in the country featured in the Malaysia Book of Records. The temple is located next to the railway tracks between Jalan Tun Abdul Razak and Jalan Mohd Taib (or near the Tebrau Highway), the temple is one of Johor Bahru’s oldest Hindu temples.

The temple was reconstructed in spite of difficulties and obstacles, and formally reopened in 1996. 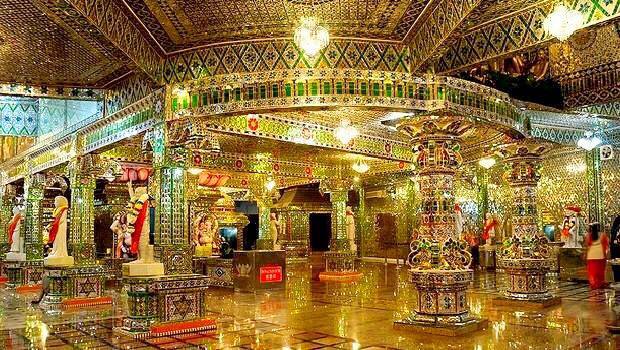 The caretaker of the temple, the Guru was inspired to construct the temple in such astonishment, prior to being inspired by the glass temple in Bangkok.

He wanted the small hut temple to earn a name for itself hence he renovated the temple with such magnificent details built entirely out of glass pieces, bringing a whole different astonishing artifact, leaving you mesmerised!

Sri Shakti Temple at Bukit Rotan is the first temple in the world to hold the elements of Amman from 51 temples around the world. The temple also possess 51 Amman statues in their mandapams with gorgeously structured statues.

As an absolutely brilliant representation of Hindu Sirpa Sastras, this holy site includes frameworks that encompass a perfect Amman Temple.

There are perfectly sculpted palisade walls and an intricately carved five-tiered gopuram entrance tower at the Sri Shakti Temple. It took 4 years to complete this breath-taking temple.

This has been one of the greatest looking Hindu temples in Malaysia, and as its popularity spreads across to everyone in the years to come, it is particularly a prominent tourist attraction.

Hence, folks why burn a hole in your pocket to go continents and seas away to visit temples abroad to pay your vows when you have such majestic amazing temples right here at your comforts! 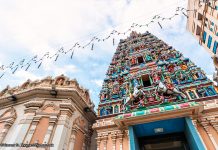