Malay & Chinese Aunties Impress Netizens With Their Proficiency In Tamil

A knack of languages! 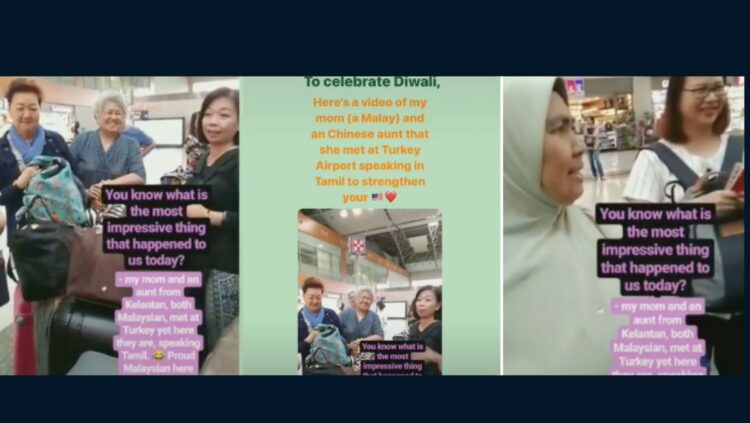 This video has certainly made our day!

​​Malaysia is a melting pot, with people who are speaking a number of languages in close proximity. Many of us are multilingual, but there are also those who can speak many languages in addition to their native speech.

Recently, a video surfaced online featuring a Malay and Chinese lady speaking fluent Tamil which has since gone viral on TikTok and other social media platforms. The video which was posted four days ago has been flooded with many praising both ladies for being fluent and wanting more videos of them speaking in Tamil.

The video on TikTok carried a meaningful caption ; “To celebrate Diwali, here’s a video of my mum (a Malay) and a Chinese auntie that she met at Turkey airport speaking in Tamil.”

The video has garnered more than 822.7K views with 78.6K likes. Aina Afiqah, the daughter of the Malay aunty has mentioned that they had seen a group of Chinese aunties at the check-in lane at the airport.

“It’s actually a short video of a throwback from our October 2018 trip to Turkey. We lost our passports, hence my mom and I were left on our own at Turkey’s airport.”

Additionally, World of Buzz stated that her mother mastered the Tamil language during her childhood as she was raised in an estate area filled with multi-racial families. The video has certainly showed us the solidarity and unity among our fellow Malaysians.

You don’t have to look far to find our locals being shining examples. Their video is enough to leave a smile on our faces.